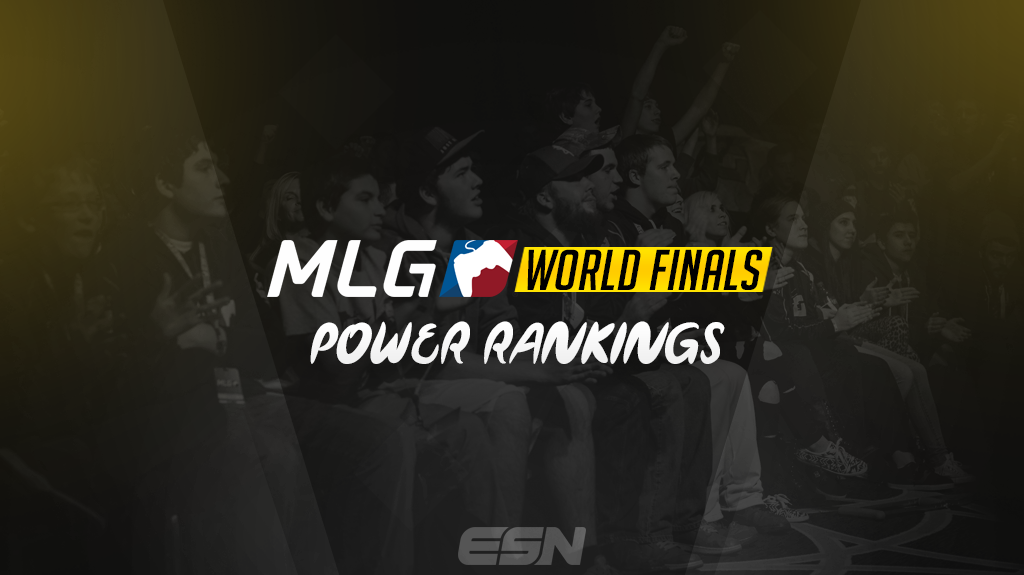 This is the start to a new series at eSportsNation for Call of Duty: Power Rankings. Obviously since this is the end of the current game cycle, this article will be our only power rankings article of Call of Duty®: Advanced Warfare , and we will not have another one until professional play for Call of Duty®: Black Ops III begins.

With that being said, let’s explain a few things. These power rankings will focus solely on the 12 North American (NA) teams in Pool Play for the MLG World Finals on Oct. 16-18. The rankings are calculated based on individual rankings from anyone on the eSportsNation staff who wanted to participate. Each person ranked the 12 teams in order from best to worst, and the points system is as follows: 12 points awarded to No. 1, 11 points awarded to No. 2, 10 points awarded to No.3, and so on and so forth until we get to one point awarded for No. 12.

Now that we’ve dealt with that, let’s get to the good part.

Even though FaZe Clan has won three of the past four events, our staff has OpTic reigning supreme. In the closest vote by far in the entire rankings, OpTic’s dominance throughout Advanced Warfare prevailed over FaZe’s recent impressive form.

As stated above, FaZe’s recent performances just weren’t quite enough to put them above OpTic, but they are above the rest of the competition. With only a small hiccup at UMG Washington D.C. , FaZe has still proven their worth after making history at the MLG Pro League Season 3 Playoffs , managing to make a loser’s bracket run and defeat OpTic in two best-of-seven series to win the tournament.

After the large gap in votes between the OpTic/FaZe powerhouses and the rest of the teams, eLevate leads the next tier of competition. Almost every person on the eSportsNation staff who participated in this placed eLevate at No. 3 on their rankings. Parting ways with Nicholas “Classic” DiCostanzo and picking up Octane should do nothing but help this already consistently strong squad.

After an up and down string of events, the Denial squad still looks very strong. An earlier-than-expected exit from Season 3 Playoffs caused in part by an upstart Epsilon eSports squad shouldn’t hinder Denial too much coming into this event.

A team that began the year almost completely unknown, the iSo organization has quickly risen in prominence. Only recently still considered an “amateur” team, iSo has fought and fought, having strong event after strong event, and proved that they can play with the powerhouses. If ever there was a professional team to call a darkhorse, it would be them.

No one is entirely sure how this happened. Through the majority of their time in North America, Epsilon has played mediocre at best. They played extremely well at UMG Dallas and shattered all expectations at Season 3 Playoffs, but those events were separated by periods of bad play in the middle. After dropping Matthew “Royalty” Faithfull, a player whom many considered to be the star of Epsilon, and picking up AquA, one question stands out: Can they continue to perform through the adversity and the recent roster change?

After Season 3 Playoffs, both Octane and AquA left EnVy in search of a change in scenery and possibly higher placements, leaving Loony and JKap looking for two new teammates: enter Jurd and Goonjar. Jurd, on loan from a disbanded TCM Gaming , is itching for success in North America, and he may have finally found an answer. Goonjar has recently been playing with many different amatuer squads, never really finding a home after leaving the pro scene. Loony and JKap obviously think he’s ready to come back and play with the best of the best, and he will be the x-factor on this team. We know what we’re getting from the other three players, but Goonjar is a bit of an unknown factor right now.

Advanced Warfare has not been kind to the boys on Team Kaliber. A storied organization, Team Kaliber has failed to impress really at any point during this game. After Season 3 Playoffs, they parted ways with Anthony “Nameless” Wheeler and brought in Apathy. Will new, but also familiar, blood be what this team needs to perform? Who knows, but this squad certainly has the talent to do well. They just need to put it all together.

Since its inception as the sister team of OpTic Gaming, OpTic Nation has underperformed time and time again. It doesn’t seem to matter who is on the roster, they just can’t win. They’ve certainly had their moments in the sun, but overall it hasn’t been great. The addition of Nameless could be helpful for Nation, but losing Steve “Mochila” Canle was a big blow. Inconsistency reigns supreme over Nation, so we have no idea what team will be showing up to the MLG World Finals.

Did we expect Aches to be on the No. 10 team on these rankings? No. Do they deserve their rank? Yes. To be fair, we haven’t seen this Rise squad on LAN yet, as Aches only joined after Season 3 Playoffs, and we all know how much of a factor Aches can be at major LAN events. Based on what we saw from the previous Rise squad that included Apathy instead of Aches, there just doesn’t seem to be enough talent on this team to warrant a higher ranking.

Their placings say it all. Only breaking the top-eight at one event this year, besides the MLG Pro League Season 3 Relegation Tournament , the Orbit squad has failed to impress. Adding on an Advanced Warfare World Champion in Replays should help their cause, but we aren’t expecting too much from them.

The only non-professional North American team to make Pool Play, this team, to be frank, doesn’t seem to stand much of a chance. Apparent teamwork issues and clashing egos may be what stands in the way between XGN and having a decent tournament. From the various players’ Twitter accounts, things don’t seem to be getting much better. Maybe it’s all a ploy and they’ll come in with team chemistry and wipe the floor, but that’s not likely.

After each eSportsNation staffer ranked the 12 teams, they were asked to choose a wildcard team from the open bracket that they could see being a darkhorse in the tournament. Two teams were overwhelming chosen above all others, so let’s take a look at both of them.

Though we’ve only seen this JusTus squad at one LAN event, they performed incredibly. Going undefeated in the open bracket at UMG D.C. without dropping a map, and then defeating FaZe, Epsilon and VexX Gaming in Pool Play, JusTus came out of nowhere and shocked the scene. Their momentum faltered however, as they fell to Denial and FaZe in bracket play, and were eliminated from the event with a Top-12 finish. Still, this squad is the amateur team that almost everyone is saying to watch out for.

A team that was created because Mochila left OpTic Nation, Royalty was dropped from Epsilon, FEARS left TCM Gaming and Lacefield parted ways with XGN, this squad turned out to be something pretty intimidating. None of these players were dropped or left their teams because they themselves were bad, there was always a different factor playing in. Each one of these players individually have an incredible amount of talent, and this squad will definitely be a fun one to watch.

So what did you think of our power rankings and our wildcard teams? Anything you would have changed had you been on our staff? Let us know in the comments below, or on our Twitter @eSportsNation . Be sure to follow us to stay up-to-date on all things competitive gaming.