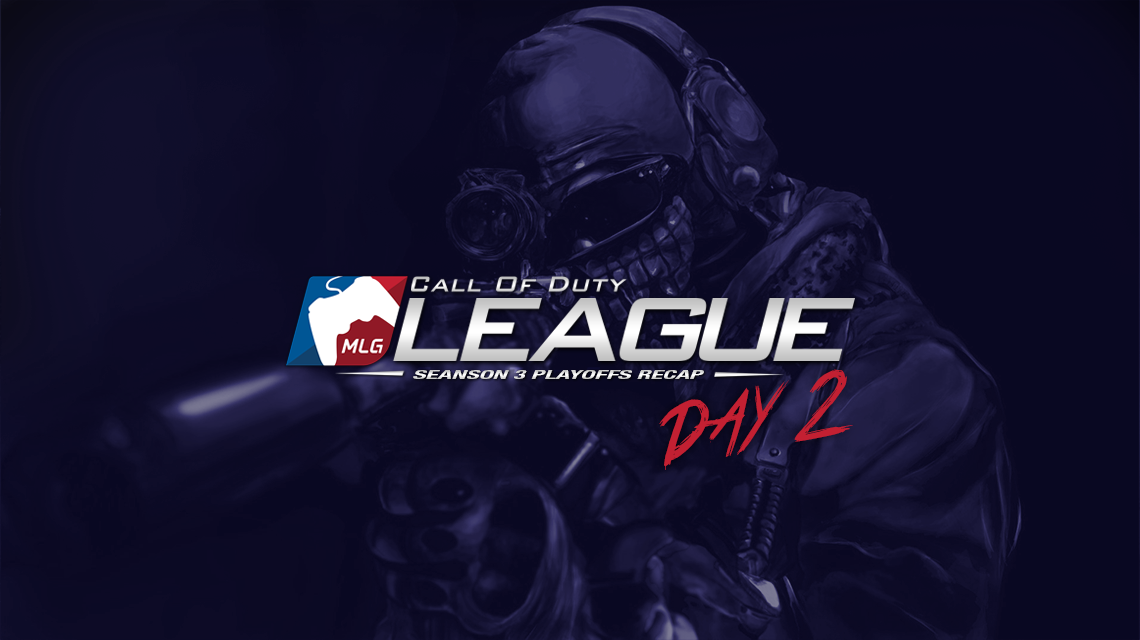 A detailed recap consisting of all Day 2 matchups that resulted in four teams being eliminated and the other four advancing to Championship Sunday.

Strikezone Domination: FaZe entered the game dominating Most Wanted in the beginning minutes of the map. With FaZe holding a two cap for a short period of time to keep the score close, MW ended up winning the first half by four points. FaZe continued to fight, but MW managed to hold their lead winning the first map and taking the series 1-0.

Octane Search and Destroy: Most Wanted began the map strong taking the first round. Going into the next round after a few trades Parasite was left in a 1v1 against Slacked. Making a huge play, Parasite tied up the round count 1-1. Again the teams trade rounds making the map 2-2. After FaZe went up 3-2, we had a bomb glitch occurrence ending the game. After the restart, Classic is left in a 1v3 against FaZe and loses to go down 4-2. MW stays composed and makes a comeback to make the game 5-4. FaZe force a round eleven and win the map 6-5 tying the series 1-1.

Octane Blitz: Many caps were being traded throughout both halves of the game. Both teams played extremely aggressive. Unfortunately, Censor struggled throughout the game for FaZe. MW won by it being mathematically impossible for a possible comeback with one minute left in the game winning the map and taking the series 2-1.

Domination Sovereign: FaZe started out very aggressively. They got early control of B over MW to shift the momentum towards FaZe. MW began to take control and made a comeback leading over FaZe by thirty points. MW gained a huge lead in the second half of the map, solidifying the win for them. Slack dropped a 30 bomb to help assist MW to win the series 3-1, eliminating UMG Nashville Champs, FaZe Competitive.

Strikezone Domination: OpTic began strong quickly grabbing the B flag and pushing for an early spawn trap on C. Rise was able to bring it back slightly by the end of the first half. The second half began the same as OG repeated grabbing map control early. This was held throughout the second half and propelled OpTicto win map one 163-130.

Warhawk Search and Destroy: The bomb glitch struck early as OpTic made an attempt to defuse the bomb. After the game restarted, the two teams went back and forth trading rounds and trying to get an edge. This went all the way into round 11 where Rise got the offensive side where they had been perfect the whole game. Loony was not able to win the 1v2 and OpTic took the map 6-5 and now lead the series 2-0.

Freight Blitz: OpTic wanted a quick 3-0 and used momentum to take down all Rise players off the start and go out to a 6-0 lead. By the end of the first half OpTic lead 10-5. Rise was able to make a slight comeback, narrowing the deficit. OpTic however was having none of it, escaping Rise’s control to cap two more times and seal the deal at 18-13, and grab a 3-0 sweep.

Freight Domination: The map started out slowly until EnVy finally gained map control by the three minute mark. OpTic Nation attempted to fight back, but EnVy fended them off. EnVy had a decent lead of 84-61 going into the second half. EnVy was able to keep the aggression and ended up winning map one in the series.

Warhawk Search and Destroy: Merk started off the second map with a triple kill in the opening round, giving EnVy the early lead. Formal also clutched a 1v3 to increase EnVy’s lead. OpTic Nation was able able to trade rounds tying up the score, 3-3. Formal and Merk made great plays to put their team ahead, 5-3 over OpTic Nation. nV continued to dominate taking the second map.

Freight Blitz: At the start of the match, neither team was able to gain a significant advantage, as the score stood at 1-1. Quickly, EnVy was able to gain a huge continuous lead. The half ends as EnVy lead 8-2. EnVy carried their momentum and proceeded to gain the advantage over OpTic Nation. EnVy’s lead continued to unravel as they won 23-6, winning the series 3-0. Nameless played notably well dropping 35 kills.

Freight Domination: After a slow starting game, Denial gained map control by securing the B flag. Denial took the first half 85-53. They came out strong in the second half keeping the lead. Noble was able to bring the game back, but Denial still won 151-126, winning map one in the series.

Warhawk Search and Destroy: Noble and Denial continued to trade rounds back and forth, until Noble gained the 4-2 lead. Denial was able to make a slight comeback tying the game 5-5, but Noble was able to close it out 6-5, and tie the series 1-1.

Warhawk Blitz: Off the break of the match, Denial and Noble were able to trade caps successfully. Coming into the final seconds, Noble was able to sneak a cap in the final seconds to go up 5-1 by the end of the first half. Denial shortened Noble’s lead and caught up, but Sender was able to make a huge stop to win the map 7-6, making the series 2-1.

Sovereign Domination: The match started out very balanced until Noble took the lead over Denial. Slasher was able to get a big three piece on B to keep the flag and control. Noble was up on the first side 96-63. Noble gained quick possession of B control and then secured a triple cap. Noble gained a huge lead and was up by sixty points. Denial could not catch up and Noble won the series 3-1. Noble came from 0-8 in the league to T3 in the S3 Playoffs.

Octane Domination: It was a close one from the start as both teams fought for B control. Both teams played evenly and the score was close heading into the second side. The second half was primarily the same story as the game came down to some final clutch kills from Most Wanted which in turn gave them the win 149-147.

Freight Search and Destroy: After four quick rounds, both teams found themselves with a tied score of 2-2. Classic stepped it up in the second portion of the game which lead to two straight round wins for MW, making the score 4-2. After winning their fifth round they had their opponent, Replays in a favorable 3v1 in which they won giving them the 6-2 win, and an overall map count lead of 2-0.

Octane Blitz: Denial needed this map to stay alive and they looked like they would by scoring first and taking an early lead. This lead was held all the way into halftime as both teams traded and Most Wanted couldn’t shorten the deficit at all. MW started the second half down 6-3 which was shortened by a sneak cap from Classic. Spacely made some huge plays to enable his teammate and himself to cap making it a 8-7 game in their favor. Most Wanted fended off the last push from Denial and put through one more insurance cap to secure a 9-7 win, sweeping the series 3-0.

Warhawk SnD: OpTic Nation started strong taking the lead, 1-0 over OpTic Gaming. OpTic Gaming stepped up and played strong, as they took five straight rounds over OpTic Nation. Ricky stepped up, clutching the 1v2 and defused the bomb. The game was now 5-2, as OpTic Nation quickly were struck down and left Mirx in a 1v2. Mirx picked off Scump, but Nadeshot quickly picked him off, as OpTic Gaming won and took a 2-0 series lead. Nadeshot played terrific with 11 kills and two deaths as well as three bombs planted.