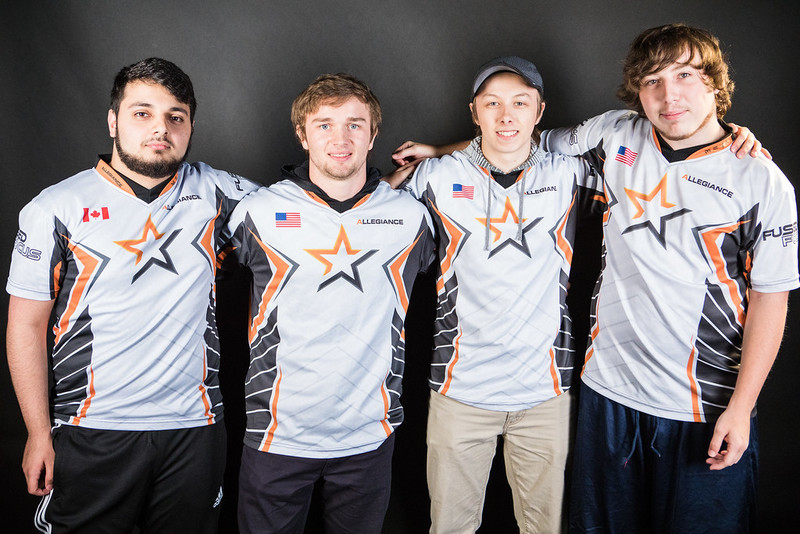 This year’s Call of Duty World League Championship will be the last competition for a popular esports organization.

On Aug. 3, Allegiance announced that it would be shutting its doors just under two years after the organization entered the world of esports. But even though Allegiance is leaving the scene, they’ll still be represented by a Call of Duty team at the biggest event of the Infinite Warfare season.

Related: Allegiance shuts down after less than two years of operation

Mehran “Mayhem” Anjomshoa, Tristan “Spoof” Green, Dakota “Nova” Williams, and Austin “Believe” Smith will participate in the $1.5 million tournament under the ALG banner, in what seems to be the organization’s final esports tournament.

But Mayhem, the captain of Allegiance’s Call of Duty team, said that his team is ready to represent ALG at next week’s LAN event.

“We don’t feel any pressure at all knowing that we are the last Allegiance team,” Mayhem told Dot Esports. “If anything, it gives us more motivation to do well for the organization and give them a memorable event—hopefully by winning the event.”

Mayhem, Nova, and Believe joined Allegiance on April 14, and since then, the team placed top 20 at the CWL Anaheim Open in June before last month’s North American Last Chance Qualifier.

Allegiance was the second seed entering the NA LCQ, and they simply dominated the competition with a perfect 6-0 map count. Most notably, ALG has been impressive in the respawn game modes—and Mayhem attributes this to how long he’s been playing with his current teammates.

“I believe we are really good at Hardpoint and Uplink because it takes a lot of teamwork, slaying, team chemistry, understanding of the situations, such as baiting for teammates and communication,” Mayhem said. “We mainly had the advantage because myself, Believe, Nova, and Spoof have been teaming together since Dallas and we were able to take advantage of going through stuff together for a longer period of time.”

ALG’s team chemistry will be put to the test on Aug. 9 when the group stage for the Call of Duty World League Championship kicks off. Mayhem and crew are in Group E, alongside FaZe Clan, Red Reserve, and eRa Eternity.

And despite the strength of FaZe and Red Reserve, Mayhem thinks ALG can go 3-0 or 2-1 in this group.

“I believe we can beat FaZe if we are all warmed up and feeling good,” Mayhem said. “We have some experience playing FaZe at Dallas. Yes, it didn’t end well for us, but we have gained better composure and more knowledge of the game. Anything can happen in IW. As for Red, we just have to play our game and we will be fine.”

Allegiance’s captain will also lean on his prior experience when facing off against FaZe and Red. Mayhem actually played in last year’s CoD Champs for Apotheon Esports—and he competed alongside eUnited’s twins Alec “Arcitys” Sanderson and Preston “Prestinni” Sanderson.

Although the 2016 Call of Duty World League Championship didn’t go very well for Mayhem—Apotheon went 1-2 and didn’t make it out of the group stage—he believes that this year will end much differently.

“Honestly, last year at Champs was a great learning experience for me,” Mayhem said. “Coming into this year’s Champs, I learned to just play with confidence and be confident with the decisions I’m making, whether it’s in-game decisions or just play calls. Being the captain for this team also helps because I can share my experiences with the guys and make them feel comfortable in whatever they’re doing.”

Even though Mayhem left California with a top 24 placing at last year’s CoD Champs, ALG’s captain strongly believes that his team will show up when it matters most next week.

“My overall prediction for our team is top eight at Champs, but we have the mentality of trying to win the event and putting on a show for ALG,” Mayhem said. “I want to give a huge shoutout to Connor for picking us—we won’t let you down at Champs.”

It’ll definitely be interesting to see how this Allegiance squad performs in what appears to be the organization’s final esports event. And all the action from this year’s $1.5 million dollar tournament will kick off on Aug. 9—ALG will start their tournament run with a 1pm ET match against FaZe.