The story kicks off with a handful of mysteries, which start resolving with the Break on Through mission. During this mission, players get to witness Bell and Adler’s true natures, alongside getting their chance at a trophy named Mind Trip.

Players who’ve played games similar to Detroit Become Human will be familiar with trophies that require them to witness all endings of a single mission/ storyline. You’ll need to play through the mission at least twice to earn the Mind Trip trophy. Each run should take up to 20 minutes and you’ll play through the same flashback four times. Obeying or defying Adler’s orders will direct you toward two different paths, and there’ll be a couple of certain aspects you’ll need to pay close attention to make sure you don’t miss a step.

No one really enjoys doing what they’re told, especially while playing games. You may find yourself naturally disobeying Adler during the Break on Through mission, which will certainly be helpful to identify the core aspects of the task.

Left of the temple

During the mission, you’ll find yourself at the entrance of a temple ruin after fighting against Viet Cong fighters. The narrative will indicate that Adler wants you to go right, but you’ll need to take a left to defy his orders.

Left to the bridge and then a right 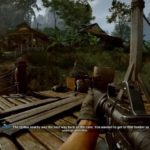 After defying Adler’s first orders, you’ll find yourself at another crossroads with a bridge on the left and a zip line on the road. Since you’ve already made him unhappy once, he’ll try to get you back to where he wants you and order you to take the zipline.

Going across the bridge toward the left will be enough to defy his orders. You’ll find yourself at yet another crossroads after the bridge, but Adler will be too annoyed by this point, and it won’t matter which path you take.

For this guide, we’ve taken the right path after crossing the bridge. After taking the right path, you’ll find yourself in a village, fighting against Viet Cong fighters alongside American troops. Air support will land the killing blow, and you’ll need to make your way to a concrete structure with a red bunker door.

Opening it will suddenly turn your screen to white, and you’ll find yourself in a vision with television and seat with straps. This is the first memory ending of the Break on Through mission, and interacting with the chair will let you go through the memory again.

Interacting with the strapped chair at the end of the first memory ending should send you flying back so you can start making your way toward collecting the second memory ending.

Make a left to the bridge and then a second left 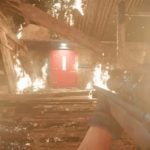 Adler will be back trying to make you obey his commands. You’ll need to keep disobeying him until you find yourself at the crossroads where you chose to take the bridge. Cross the bridge again, but this time you’ll go left instead of taking the road on the right.

This time, you’ll join the American soldiers on a cliffside with a sniper rifle at your disposal. After taking down a couple of Viet Cong soldiers, you’ll get a chance to call in a napalm strike, which’ll be enough to seal the deal.

Once you clear the premises, head down to the hut and proceed to the red bunker door after making your way through the fire.

Opening the red door will let you see the second memory ending, featuring the same room that you saw in white with more details. 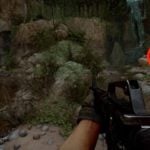 After you get to see the second memory ending, the mission will restart again with Adler, hoping that you listen to him this time around. You’ll still be disobeying him, however, but by cutting him some slack in the meantime.

Make a right toward the bamboo trapdoor

As you make your way toward the temple ruins, you’ll throw a bone to Adler for once and actually listen to him. Go down the ledge and carefully assassinate Viet Cong soldiers without getting detected.

You’ll find yourself at another crossroads, and you’ll want to make a right to find a bamboo trapdoor. This path will lead you into a dark cave toward the third memory ending.

You’ll get attacked while walking in without seeing anything and pass out in the process. Once you wake up again, you’ll see the red bunker door again, but it’ll be highlighted with a spotlight this time. Go through the and a chain of events will kick off, showcasing what’s been going on in that brainwashing lab you’ve been seeing. 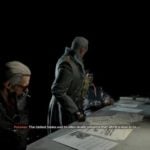 You’ve successfully pissed off Adler at this point. He’s so furious that you won’t even need to play through the initial gunfight. You’ll find yourself in front of the bunker door, and all you need to do is avoid going inside.

Doing anything apart from that will let you trigger the fourth memory ending, where you’ll be listening to Perseus. Alternatively, you can also keep avoiding the door until Adler forces you to go in so you can unlock the Red Door achievement.

Getting your hands on the fourth memory ending wraps up your first play through the Break on Through mission.

Now that you’ve unlocked all the memories by disobeying Adler, it’s time to see what happens when you actually listen for once.

Right of the temple, left to the cave 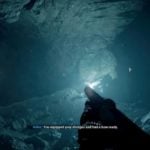 Make your way to the temple ruin and keep following Adler’s instructions. Take a right and stealth your way through. You’ll find yourself at a crossroads. Listen to Adler and go through the cave.

You’ll find yourself fighting against Viet Cong and Soviet enemies with your trusty shotgun and bow before reaching the red bunker door. Go through the door and you’ll get to see the fourth path and the fifth memory ending of the mission.

This will have you go through a dark hallway with Perseus on your sight.

As you almost thought you were finally going to hear what Perseus was planning, the memory restarts, and you find yourself at the beginning once again. 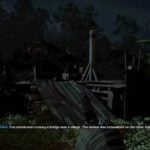 Move toward the temple ruins and follow Adler’s instructions. His directions will lead you to a bridge and make you turn right after crossing it. You’ll play through the same village shootout to enter the red bunker door in the end, which will trigger the sixth memory ending.

You’ll find yourself in complete darkness with two slide projectors next to you. You’ll be able to use either of them, and doing so will let you cycle through pictures. These images will be from Berlin, Moscow, and Washington.

Each projector will have a certain slide that displays one half of the red bunker door, and you can go through it by setting both projectors to the right slide.

You’ll need to disagree with Adler at some point during this step, but he’ll need to be the one that cuts some slack this time.

Make a left from the temple, but a left after the bridge 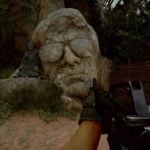 Take a left from the temple and make it across the bridge. You’ll notice that the right patch you just took minutes ago is now blocked with Adler’s head. You thought you’d need to disobey him, but he too wants you to go to the left this time.

Going left will get you into some sniper action, and you’ll need to call a napalm strike to proceed. As you progress through the memory, you’ll make it to the meeting room with Perseus. It may be tempting to stay and punch him in the face, but you’ll need to go to the back of the room to use a computer terminal so you can unlock the seventh memory ending.

You’ll get to read everything about Project Greenlight, Perseus, and Nova-6, but the computer slowly becomes unusable, leaving you hanging.

We save the best for the last, and it’s also the most straightforward memory to complete.

Walk straight into the temple

You may remember the temple door you avoided during your first stint. You don’t need to resist Adler this time, and you can just walk into the temple as he orders you to do so.

Walking inside will let you unlock the Perseus meeting memory ending, which is the final one of them all.