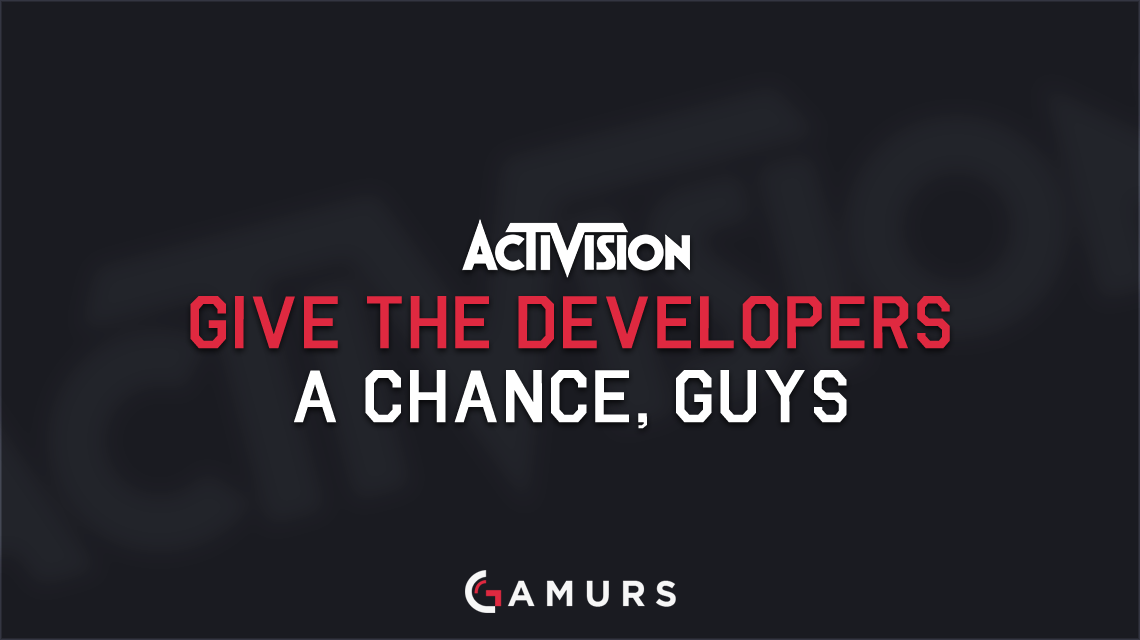 We have the same conversation every year. “Call of Duty is dying.” “Viewership is lower than it should be.” “(Insert game here) is going to be the Call of Duty killer.” This year is no different. People are seeing the reports that sales for Infinite Warfare are down. This is a red herring, I might add, so don’t read too much into it; sales of physical copies went down, when the trend for physical sales are down across pretty much all electronics/gaming related items, as digital sales are trending upwards at a very high rate.

People are seeing mopey tweets from the same professional players. People see the YouTubers out there who usually play the latest Call of Duty game playing some other game instead. In this case, Modern Warfare Remastered, which comes with Infinite Warfare, is one of the more popular titles on Twitch.tv at the moment. As a result, people are raising the usual number of complaints, and it’s all doom and gloom as usual.

Stop. Please, just stop. Everyone wants to complain and moan about how they think the latest Call of Duty is the worst. I used to be one of them, admittedly- I was one of those people who criticized Ghosts a ton (although in my defense, there were things that needed fixing in there…remember the bomb glitch, folks?)- but about mid-way through the game cycle for Advanced Warfare, I stopped. Why? I got tired of complaining. As much as I wanted to hate Sledgehammer, they did an okay job dealing with the glitches and issues in the game, so I backed off my criticism of them.

With that in mind, let’s also consider Black Ops III. Was it a perfect game? Again, no. There were glitches, balance problems, and small issues here and there. But with that said, Treyarch was stellar when it came to supporting their game, and made the game one of the most competitive games in Call of Duty history. Activision took ownership of their own esports scene, and with the help of the people at MLG, they did a pretty great job continuing to build the scene. After Black Ops III, there is literally no doubt that Call of Duty esports is a legitimate esports operation.

Yes, we do have lots of improvements to make. Yes, viewership could be better. Yes, I’m partial to the boots-on-the-ground, no-booster gameplay that we had in old-school Call of Duty. I made these same observations last year, though, and I had a lot of skepticism going into Black Ops III; yet, it turned out to be a great game that did a ton for our scene. For that, the developers deserve our respect and appreciation, not our hatred.

I think we all want to hate the developers a bit. When something goes wrong in one of our games, we want someone to blame. The developers of the game are an easy target. Perhaps, in your eyes, they messed up the netcode, or the gun doesn’t shoot straight, or you got stuck on the wall for a millisecond. That’s why you lost the gunfight; the game is trash, not you. When something in the game isn’t exactly the way you like it, you complain about it and blame the developers.

I simultaneously pity and respect the developers of this game. No one else can do what they have done, and yet all they get from anyone in our fan base is hatred and disgust. You think the hatred that Trump supporters have for Clinton (and vice versa) is bad? Oh, no. You haven’t seen anything. The kinds of tweets and comments that hardcore gamers send the developers of their favorite games would make a Navy Seal cry like a baby.

The point I’m trying to make is this: give it time, and trust Activision a bit. When something is going wrong, point it out respectfully with the intention of getting their attention so it makes their job a bit easier, not to make them look bad. Don’t tell them that you hope they suffocate in a shallow grave (I’ve seen that insult before, and I felt bad for the dev for which it was intended). Let them do their jobs, and I’m sure that a year from now, when the next Call of Duty rolls around and the cycle of complaints starts again, we’ll look back on Infinite Warfare fondly and see how our scene has changed for the better over the lifecycle of the game. Just give the developers a chance, ok?

We’re in for a crazy, awesome year of Call of Duty esports. Just sit back, chill, and enjoy the ride folks.

What are your initial thoughts about Infinite Warfare? Let us know by commenting below or tweeting us @GAMURScom.