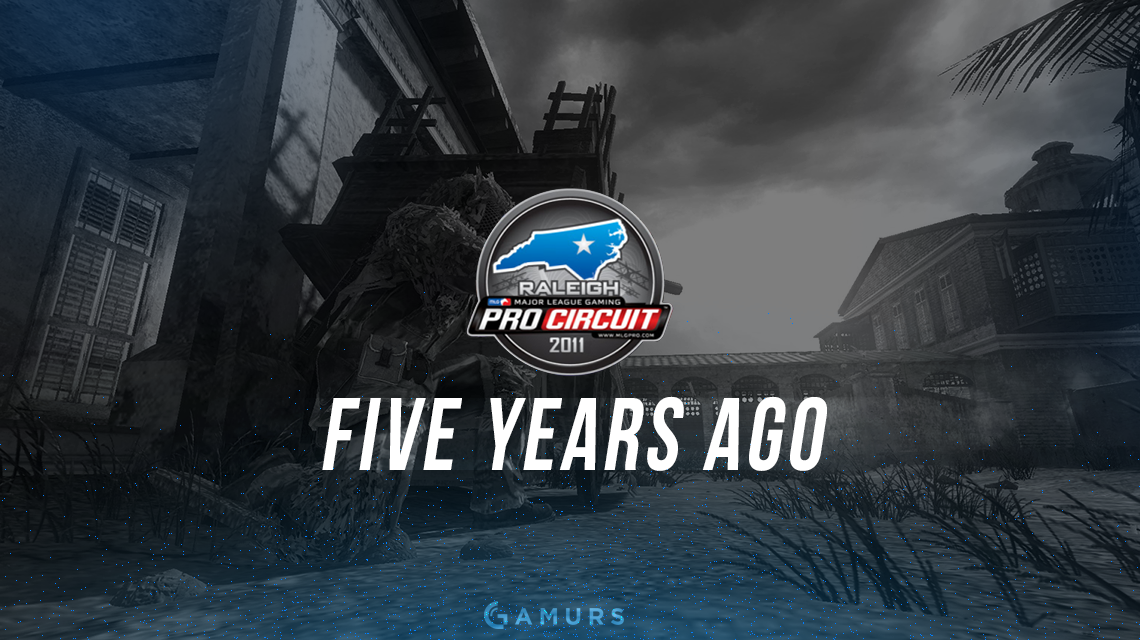 Back on July 31, 2011, Quantic Leverage was crowned the champions of MLG Anaheim 2011, their second title in three events for Call of Duty®: Black Ops on the Major League Gaming Pro Circuit. Teams had a very quick turnaround for the next tournament, as just one month later, MLG hosted their fourth LAN event of the Black Ops season: MLG Raleigh 2011.

Just like the past two events, Raleigh featured a pool play system, where the top-16 teams from the previous event were divided into four groups of five teams. This meant that the ever-important open bracket would produce the fifth and final team in each pool play group.

Also similar to the past two MLG events, only one team from each of these groups advanced to the championship bracket from pool play, with the other four teams being sent to different rounds in the losers bracket depending on their record or performance in the group stage.

In the open bracket, two teams dominated, while the final two teams had to fight their way into pool play. apeX.Collapse and Split Second both qualified for pool play relatively easily, but Brain Dead and Redemption had to claw their way to the top in order to emerge as one of the four pool play teams from the open bracket.

Group A consisted of Quantic Leverage, the number one overall seed in the tournament and the defending champs, A4V Twisted Method, aBnormaL, oB Pro and Collapse. In a shocking turn of events, Quantic Leverage, consisting of Patrick “ACHES” Price, Tyler “TeePee” Polchow, Seth “Scump” Abner and Jordan “ProoFy” Cannon, finished second in this group with a record of 3-1. Collapse, with a roster comprised of Aaron “TuQuick” Chang, Christopher “Parasite” Duarte (playing under the alias “carameL” at the time), Bryan “Apathy” Zhelyazkov and Emmanuel “Pikachu” Correia, continued their dominance from the open bracket en route to a 4-0 showing in this group, including an impressive 3-2 win over Leverage. Twisted Method came in third with a record of 2-2, while aBnormaL went 1-3 and oB Pro rounded out the group with a 0-4 performance.

Similar to Group A, Group B also had a team go undefeated to earn their spot in the championship winners bracket. Group B was made up of OpTic Gaming, the number two overall seed in this tournament, Influence, IcoNs Blue, Last Minute and Split Second. With a roster including Ray “Rambo” Lussier, Will “BigTymeR” Johnson, Jordan “JKap” Kaplan and Joe “MerK” DeLuca, OpTic Gaming breezed through this group, going 4-0 and losing just two maps in four series. IcoNs Blue and Influence both ended pool play with a 2-2 record, while Last Minute and Split Second went 1-3.

Group C was the only group that did not have a team go undefeated for the top seed. This group consisted of Team FeaR, the tournament’s third overall seed, Obey, IcoNs Black, A4V yunGunZ and Redemption. FeaR, led by Robert “ASSASS1N” Walsh, Johnathon “John” Perez, Phillip “PHiZZURP” Klemenov and Eric “Twizz” Servello, was able to win this group with a 3-1 record. Team Obey also went 3-1, but FeaR’s 3-0 win over Obey secured them the top spot in this group. IcoNs Black was able to go 2-2 in this pool, while yunGunZ and Redemption both ended group play with a record of 1-3.

Finally, Group D went back to the tradition of the top seeded team dominating their group and going undefeated. This group was made up of Team EnVyUs, the fourth seed at Raleigh, Quantic Nex-TT-hreat, Force, JuKeD and Brain Dead. With a roster consisting of Tosh “StaiNViLLe” Mcgruder, Matthew “Nadeshot” Haag, Bob “Bobby” Hamwi and Kenneth “Dedo” Dedo, EnVyUs went 4-0, and, just like OpTic, only lost two maps in four group play series. Nex-TT-hreat performed well in this group, going 3-1, while Force, JuKeD and Brain Dead all had a 1-3 record.

As the four winners had been established from pool play, the championship bracket was set to commence with Collapse taking on EnVyUs, while OpTic would go up against FeaR. The first series between Collapse and EnVyUs went the distance, with EnVyUs winning the decisive game five to take the 3-2 series win, sending Collapse down to the losers bracket. Joining Collapse in the losers bracket was OpTic, as FeaR proved to be too much for the Green Wall, defeating OpTic 3-1.

This set up a winners bracket finals matchup between EnVyUs and FeaR. Riding the momentum from their big win against OpTic, FeaR was able to defeat EnVyUs 3-1 in order to clinch their spot in the Grand Finals for the second consecutive event. Team EnVyUs, who had guaranteed themselves a top-three finish at Raleigh, were sent down to the losers bracket finals following their loss against FeaR.

While FeaR was anxiously waiting to find out who they would be playing against in the Grand Finals, several teams were putting together impressive runs in the losers bracket. One team in particular who stuck out from the rest was Force. The roster comprised of Ben “Domo” Shives, Joshua “Huhdle” Piha, Steve “Mochila” Canle and “Dos” defeated First Class, Obey and IcoNs Blue before facing off against Collapse. Despite their great play against all other teams in the losers bracket, Force just could not keep up with Collapse, losing 3-0. They were eliminated from Raleigh in fifth place and took home $2,000 in cash earnings.

However, there was a perennial powerhouse who was shockingly eliminated from this tournament just below Force in sixth place. On the other side of the losers bracket, both Quantic teams met up in the fifth round, with Leverage destroying their sister team 3-0. Nex-TT-hreat, consisting of Doug “Censor” Martin, Renato “Saints” Forza, “Virus” and “Vengeance,” took home $1,000 as they were eliminated from Raleigh in seventh place.

Their win over Nex-TT-hreat set up a juggernaut matchup between Leverage and OpTic in losers round six. In all four tournaments for Black Ops, the two best teams in the game met in the losers bracket, but this was the first time they had to play against one another prior to the losers semifinals. In this head-to-head series that seemed to always go back-and-forth between which team won, it was OpTic’s turn to triumph, as they defeated Leverage 3-0. Leverage was eliminated from Raleigh, earning $1,400 and a sixth place finish, their worst placing in Black Ops.

With their win over Leverage, OpTic now had to face off against Collapse, who ruined Force’s losers bracket run on the other side of the bracket, in the losers semifinals. It was a very close series, going all the way to that decisive game five, but it was Collapse who emerged victorious, eliminating OpTic from the tournament with a 3-2 series win. OpTic would leave Raleigh with $2,800 and a fourth place finish.

This set up a rematch between EnVyUs and Collapse in the losers finals. With EnVyUs narrowly defeating Collapse 3-2 in the winners bracket, this matchup became a best-of-11 continuation series that went back and forth the entire time, leading up to a game 11 Search and Destroy on Hanoi. With Collapse leading this final game at a score of 3-2, they were able to eliminate three EnVyUs players, leaving Dedo in a 1v4 situation. Dedo was able to eliminate TuQuick and Pikachu, but soon after, Apathy took down Dedo to give Collapse a 4-2 lead. From there, Apathy and company were able to finish off the map to secure a 6-5 series win for Collapse. EnVyUs was eliminated from the tournament in third place, taking home $4,000 in cash earnings.

The Grand Finals between FeaR and Collapse was now set to commence. Just like at Anaheim, FeaR had a long time to wait between their previous match against EnVyUs in the winners finals and this match, while Collapse was coming into this series with all the momentum. However, unlike at Anaheim, FeaR did not let this phase them, as they made sure to take care of business right from the start.

The first map of this series was Capture the Flag on Summit. Both teams were tied at one capture each, and ASSASS1N was able to hold off one last push from Collapse to force overtime. Twizz punched in a quick flag cap in overtime in order to win the map and give FeaR the 1-0 series lead.

In game two, Search and Destroy on Villa, rounds were traded back and forth at the start. With both teams tied at three rounds each, ASSASS1N was left in another 1v3 situation. Having already started to make a name for himself as one of the most clutch Search and Destroy players in the game, ASSASS1N made it look easy as he earned the round win for FeaR. From that point on, it was all FeaR, who went on to win the second map and move one map away from winning the tournament.

Domination on Firing Range was the third map in this Grand Finals. With their tournament life on the line, Collapse came out firing on all cylinders, but FeaR dominated the second half to secure the map win and the 3-0 series sweep, earning themselves the MLG Raleigh 2011 championship.

Collapse was eliminated from the tournament with a second place finish and $6,000, while FeaR earned $10,000 to go along with their first championship in Black Ops. For ASSASS1N, this was his second career championship, and his first since winning the 2008 MLG National Championship with Team FeaR for Call of Duty® 4: Modern Warfare. Meanwhile, PHiZZURP, Twizz and John all won their first career championship by taking home the gold at Raleigh.

The fourth event of 2011 really was a great success, providing the Call of Duty scene with a third different organization winning the championship crown. With Team FeaR now becoming the team to beat, Call of Duty players and fans were all rife with anticipation for the next event scheduled to take place in the middle of October: MLG Orlando 2011.