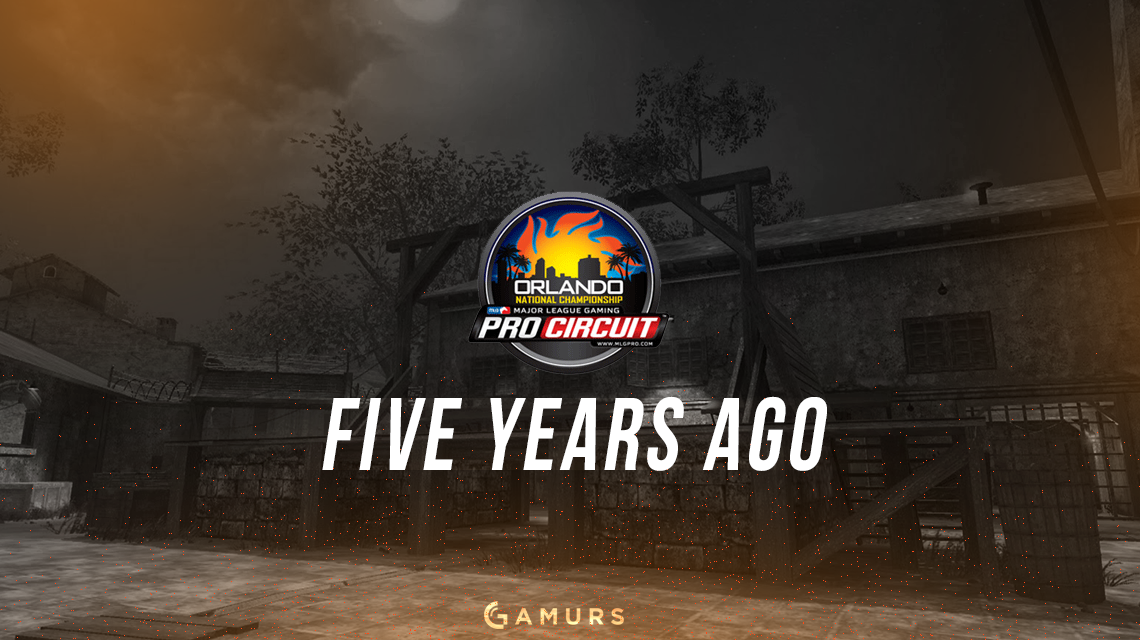 As the months were slowly passing by towards the end of 2011, so was the time remaining in the inaugural season of Call of Duty®: Black Ops on the Major League Gaming Pro Circuit. On Aug. 28, Team FeaR hoisted the trophy as the champions of MLG Raleigh 2011, marking the first time that either Quantic Leverage or OpTic Gaming did not win the event. Following Raleigh, everyone had just about six weeks to prepare for the fifth event of the season: MLG Orlando 2011.

Similar to the past few events for Black Ops, Orlando featured a pool play system, where the top-16 teams from the previous event were divided into four groups of five teams. As always, this meant that the open bracket would produce the fifth and final team in each pool play group.

Additionally, only one team from each of the four groups advanced to the championship bracket, as the other four teams were sent to different rounds in the losers bracket depending on their record and performance in the group stage.

With the four open bracket teams placed into their respective groups, it was finally time to start the pool play action. Group A consisted of Quantic Leverage, the number one overall seed in the tournament, JuKeD, Redemption, IcoNs Elite and Vendetta. After a disappointing sixth place finish at MLG Raleigh 2011, Quantic Leverage decided to make a slight roster adjustment. They kept the core three of Patrick “ACHES” Price, Tyler “TeePee” Polchow and Seth “Scump” Abner together, but replaced Jordan “ProoFy” Cannon with Damod “FEARS” Abney.

Even though they started off 3-0 in Group A, Quantic Leverage could not overcome the underdog Vendetta squad in the final match of pool play. Despite coming from the open bracket, Vendetta continued their momentum in order to go undefeated in this group. The roster consisting of Alex “Rizma” Lopez, “Dos,” “Waff” and “Legit” went 4-0 in Group A, including a 3-0 sweep of Quantic Leverage. ACHES and company came in second in this group at 3-1, while JuKeD went 2-2, Redemption went 1-3 and IcoNs Elite finished 0-4.

Group B was headlined by OpTic Gaming, the number two overall seed in this tournament, but also included Team Obey, yunGunZ, Surreal Legacy and Fate from the open bracket. Much like Quantic Leverage, OpTic decided to make a minor roster tweak after their fourth place finish at MLG Raleigh 2011. OpTic kept Will “BigTymeR” Johnson, Jordan “JKap” Kaplan and Joe “MerK” DeLuca together, but replaced Ray “Rambo” Lussier with Jordan “ProoFy” Cannon.

Despite several fans questioning this roster change, the newly-revamped OpTic roster was firing on all cylinders in pool play, going 4-0 to secure first place in Group B. Team Obey followed them up in second at 3-1, while Fate went 2-2, Surreal Legacy ended up 1-3 and yunGunZ finished 0-4.

Group C was Team FeaR’s for the taking, as the third overall seed in the tournament and the reigning champs looked to defend their title against Force, aBnormaL, PrettyGoodYoungKids and XzYaTe. As the defending champions, Team FeaR obviously kept the same roster of Robert “ASSASS1N” Walsh, Johnathon “John” Perez, Phillip “PHiZZURP” Klemenov and Eric “Twizz” Servello, and this roster delivered, going undefeated to win their group. FeaR stood atop Group C at 4-0, while Force came in second at 3-1, followed by PrettyYoungGoodKids in third at 2-2, XzYaTe at 1-3 and aBnormaL rounded out the group at 0-4.

Finally, Group D brought in some diversity as the only group in this tournament to not have a team go undefeated. This group consisted of Team EnVyUs, the fourth overall seed at this event, TGN Aim 4 Victory, Quantic Nex-TT-hreat, Xtravagant and apeX. Just like most of the other top teams at this event, EnVyUs decided to make several roster changes, keeping Tosh “StaiNViLLe” Mcgruder and Kenneth “Dedo” Dedo but bringing in Renato “Saints” Forza and Ray “LyaR” Loftus to replace Matthew “Nadeshot” Haag and Bob “Bobby” Hamwi.

Surprisingly, we saw a three way tie at the top of Group D. Nex-TT-hreat beat EnVyUs 3-2, while Xtravagant was able to defeat Nex-TT-hreat 3-2, but EnVyUs took down Xtravagant 3-0. Although all three teams were 3-1, EnVyUs earned the top spot in the group thanks to their map win percentage. Nex-TT-hreat earned the second seed from this group, while Xtravagant came in third. Aim 4 Victory came in fourth with a record of 1-3, while apeX could not continue their success from the open bracket, finishing pool play at 0-4.

After the four winners from pool play were established, the championship bracket was set to commence with EnVyUs taking on Vendetta, while OpTic was set to play against FeaR in a rematch from Raleigh’s opening round in the winners bracket. The first series between Vendetta and EnVyUs went the distance, but Vendetta continued to surprise everyone, winning the decisive game five to take the 3-2 series win, sending EnVyUs down to the losers bracket. In the other matchup, OpTic got their revenge on FeaR from Raleigh as OpTic swept FeaR 3-0, sending the reigning champions down to the losers bracket.

This set up a winners bracket finals matchup between OpTic Gaming and Vendetta. This series went all the way to a decisive game five Search and Destroy on Villa. Nobody expected Vendetta to make this impressive run, but superb Search and Destroy gameplay kept their momentum alive. However, the “GreenWall” proved to be too strong for the open bracket challengers, as OpTic was able to send Vendetta down to the losers bracket after a clutch 4-3 win on the last map to capture the thrilling 3-2 series win.

After punching their ticket for a spot in the grand finals, OpTic now just had to patiently wait to see who would challenge them for the Orlando crown. The losers bracket at Orlando was no different than any of the other past few events, as multiple teams put everything on the line in an attempt to make the long loser bracket run to the finals.

Xtravagant was the first team to make a deep run into the losers bracket. Starting in round five, the roster comprised of Ray “Rambo” Lussier, Bob “Bobby” Hamwi, Damon “Karma” Barlow and John “Revan” Boble put on a show, taking down XzYaTe 3-1, Force 3-1 and JuKeD 3-0. However, Xtravagant then ran into the boys in blue, and Team EnVyUs sent them home from Orlando with a 6-2 win in their continuation best-of-11 series. Xtravagant was eliminated from Orlando in sixth place, taking home $1,400.

On the other side of the bracket, Quantic Nex-TT-hreat met up with their sister team Quantic Leverage in the seventh round of the losers bracket. As it always seemed (at least to this point in time) in these in-house matchups, Leverage got the best of Nex-TT-hreat, defeating them 3-1. Following this loss, the Nex-TT-hreat roster consisting of Doug “Censor” Martin, “Virus,” “Vengeance” and Sean “MuTaTioN” Ellis was eliminated from Orlando in seventh place, earning $1,000.

After their win over Nex-TT-hreat, Leverage now had a date with FeaR in the eighth round of the losers bracket. The new-and-improved Leverage roster just could not keep up with the defending champs, as FeaR defeated Leverage 3-1 to eliminate them from the tournament. After winning two of the first three events of the season, Leverage found themselves with back-to-back finishes outside of the top-four, as they were eliminated from Orlando in fifth place, taking home $2,000. This also marked the first time in the 2011 season that Leverage and OpTic Gaming did not play against one another at any point throughout the event.

This now set up the losers semifinals to showcase EnVyUs going up against FeaR. In a shocking turn of events, EnVyUs was able to take down the defending champions 3-1, eliminating FeaR from Orlando. FeaR played extremely well all weekend, but they were unable to defend their title, being sent home from Orlando in fourth place with $2,800.

EnVyUs now had to face off against their newest nemesis, Vendetta, in the losers bracket finals. In this continuation best-of-11 series, both teams went back-and-forth, battling their hearts out. However, it all came down to one final map, and with Vendetta proving that Search and Destroy was their “bread and butter,” they were able to win map 11 to secure the 6-5 series win over EnVyUs. Vendetta’s win eliminated EnVyUs from Orlando in third place, giving the boys in blue $4,000.

But, more importantly, Vendetta’s win set up a continuation best-of-11 series in the grand finals against OpTic Gaming. Both teams took turns winning maps to start this series, until we reached map nine: Capture the Flag on Hanoi. On Hanoi, OpTic put on one of the best displays of Capture the Flag gameplay seen to date, capping four flags with relative ease.

OpTic used the momentum from their crushing win on Hanoi to end Vendetta’s Cinderella story on map 10: Search and Destroy on Firing Range. Vendetta was playing great Search and Destroy all weekend, but the clock finally struck midnight for this open bracket team, as OpTic was able to defeat Vendetta on Firing Range 4-1 to win the series 6-4 and earn the title of MLG Orlando champions.

Vendetta was eliminated from Orlando with a second place finish and $6,000, while OpTic earned $10,000 to go along with their second championship in Black Ops. With this win, OpTic joined Quantic Leverage as the only team to win two championships during the Black Ops season. After losing just six maps throughout this entire event, OpTic proved that their recent roster change worked out for the better.

Five events were now in the books as the 2011 season was rapidly drawing to a close. As OpTic reclaimed their spot on the Call of Duty throne, everyone in the community already turned their attention towards the final event of the season, scheduled to take place in the middle of November in Providence, Rhode Island: the 2011 MLG National Championship.