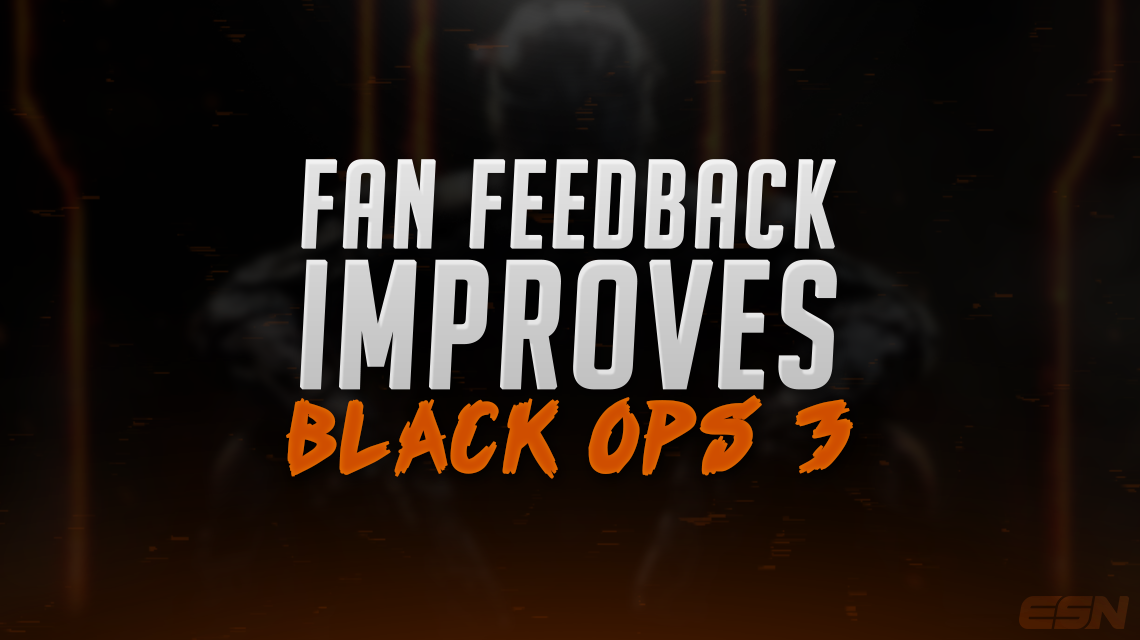 If you were one of the thousands of people who played the multiplayer beta for Call of Duty®: Black Ops III in August, your voice has been heard. Earlier today, David Vonderhaar, the studio design director at Treyarch, made a blog post detailing all of the changes that will be made to Black Ops III thanks to the feedback Treyarch received from everyone who played the beta.

The first change that Vonderhaar wrote about was in regards to the Black Hat equipment. Vonderhaar said that players were complaining that the Black Hat was too powerful and it was too easy to hack or destroy even the best scorestreaks in the game. In response to this, Vonderhaar said, “Our new hacking mechanic scales the hacking speed based on how close you are to the target, and will require precise aim to hack Scorestreaks in a reasonable time. Time-to-hack has been adjusted upwards across the board to make it more challenging to hack, especially at the higher end of rewards.” In addition, Vonderhaar wanted to make it easier for other players to know when someone is trying to use a Black Hat to hack a scorestreak on the map. To do this, Vonderhaar said that hackers are now going to appear as a red dot on the minimap while they are in the process of using a Black Hat. Also, the player who is using the scorestreak that is being hacked will be notified by a voiceover. Both of these additions should make it easier for all the other players in the game to be aware that someone is using a Black Hat, which Vonderhaar says will “provides players the ability to counter by hunting down the attacker.”

The next change that Vonderhaar announced has to do with the Rejack specialist ability. This ability, accessible only to a Nomad specialist character, allows the player to revive himself upon dying. Vonderhaar noticed that players were complaining about this ability for two main reasons: “putting players into Rejack did not count as a kill, and players were using Rejack to stack Scorestreaks.” To fix this, Vonderhaar announced that now when you put a player into Rejack, it will count as a kill. Additionally, Rejack will now reset all scorestreak progression so players cannot abuse this ability to stack scorestreaks if they are continually dying in-game.

Next up is the in-game flinch mechanic. Flinching occurs when you are getting shot at in-game, which causes your own weapon to move up in the air and out of where you are originally aiming. Vonderhaar stated that they have now “put a cap” on how much you can flinch while you are aiming down your sights (ADS). “While you will still flinch when shot, it will be within tighter constraints to keep you closer to your aim,” Vonderhaar said.

Vonderhaar then announced the addition of a red “kill marker.” Similar to the orange kill marker from Call of Duty®: Ghosts, a players hit marker will turn red when they land the killing shot. This will help make it easier for players to confirm when they have actually killed their opponent. https://twitter.com/DavidVonderhaar/status/638123092942843904

Next, Vonderhaar stated that they have improved some of the mechanics involved with the throwing of grenades in Black Ops III. “During the beta, any downward or backward player movement could make the grenade toss distances feel awkwardly short,” Vonderhaar said. “This has been adjusted so that player velocity never negatively impacts grenade trajectory. We also tweaked grenade speed and distances.” One of the bigger concerns from the Black Ops III beta was the strength of concussion grenades and flashbangs. Vonderhaar noted that players felt they were very powerful, but that both of these grenades need to be strong in order to remain viable equipment choices in-game. Thus, to make sure that these grenades were not completely nerfed to the point where they would not be useful, Vonderhaar stated that the stun time of concussion grenades has been reduced by one second. Also, to help combat the strength of these tactical grenades, the Tactical Mask perk, which helps counter the effect of both concussions and flashbangs, will now be unlocked earlier at level 13. Utilization of this Tactical Mask perk will help players against these tactical grenades, and unlocking this perk earlier in the game will help level the playing field.

Vonderhaar then announced that a “Time in Hill” statistic has been added to the scoreboard and leaderboards for the Hardpoint game mode. Another game mode that has now been improved is Treyarch’s newest game mode called Safeguard. Vonderhaar noted that “players did not feel sufficiently rewarded for escorting the robot in Safeguard.” Thus, players will now earn +25 score for every three seconds that they are escorting the robot towards the enemy base.

Next, Treyarch has decided to add additional details that will help players gain more information on who they were killed in-game. “The Kill Cam and Final Kill Cam now show what killed you (including weapons, Scorestreaks, Specialist weapons, equipment, etc.) and what perks the player has equipped,” Vonderhaar said.

Finally, Vonderhaar announced that “various weapon-balancing changes” have been implemented on at least two of the stronger guns from the beta: the Razorback submachine gun and the M8A7 burst-fire assault rifle. https://www.youtube.com/watch?v=kdLqsWDl16c To end this blog post of all these changes made to Black Ops III, Vonderhaar made a special announcement for the PlayStation 4 players. Vonderhaar wrote that anyone who played the beta on PS4 will receive an exclusive PS4 dynamic theme free of charge to thank the players for their help improving this game. We have now learned that this dynamic theme will be a “Shadows of Evil” theme, which is the name of the new Zombies map in Black Ops III. Treyarch has always been great with taking advice from the Call of Duty community, and it seems like this won’t be changing any time soon. Make sure you are ready for the release of Black Ops III, coming to a store near you on Nov. 6, 2015. What do you think about these changes just announced for Call of Duty®: Black Ops III? Let us know by commenting below or tweeting us @eSportsNation.