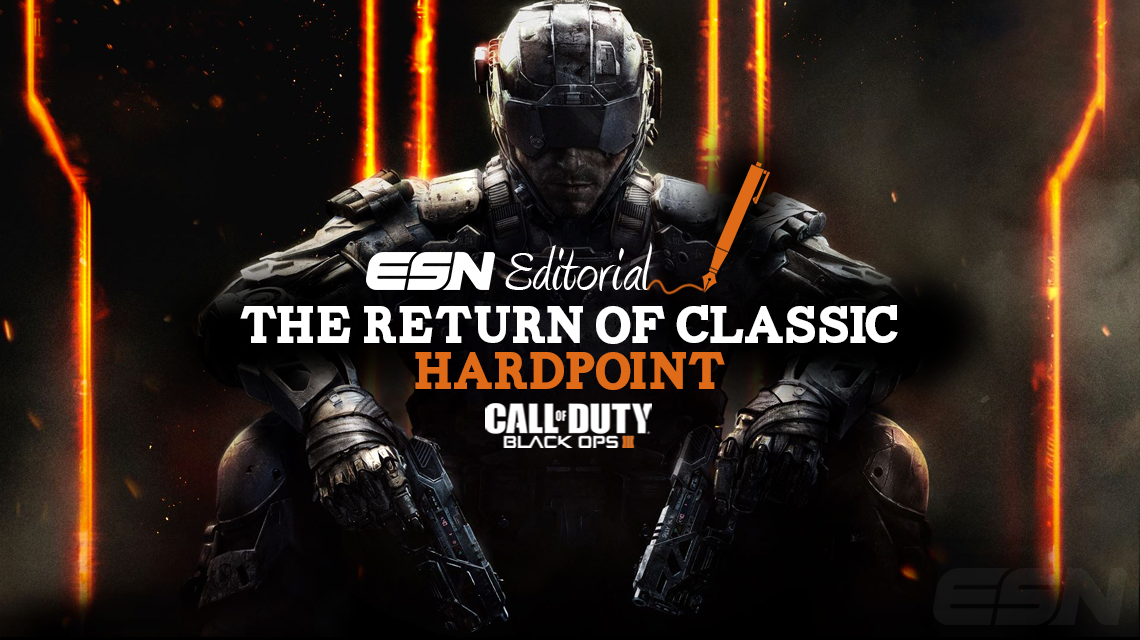 With the recent conclusion of the eSports Briefing at gamescom 2015, a lot of buzz has been circulating around Treyarch Studios’ upcoming game title, Call of Duty®: Black Ops III . CoD eSports fanatics around the globe were able to witness the return of the iconic Treyarch gamemode that gamers and spectators fell in love with, Hardpoint .

Lets be honest, the last two years of competitive Call of Duty have been rough. Fans and players have voiced their opinion over the lack of support from developers regarding the growth of the eSports scene in Call of Duty. Most people would argue that Infinity Ward’s Call of Duty®: Ghosts and Sledgehammer Games’ Call of Duty®: Advanced Warfare were a complete downshift from Call of Duty®: Black Ops II .

Ghosts surprisingly didn’t even happen to include Hardpoint in its playlists at all, which was quite a disappointment for both competitors and spectators. Instead, Ghosts revived Domination to be the first respawn-based gamemode. Castors in the past have notably admitted that it’s difficult to follow, and less exciting than Hardpoint and other respawn gamemodes.

Sledgehammer took note and decided to bring back Hardpoint into both the public playlists and for CoD eSports’ gamemode rotation. While the principles of the gamemode stayed the same, it fell short of the excitement that Black Ops II’s Hardpoint created.

What disappointed me the most was that this version threw out the need for a primary “ anchor ” role in a four-man team. Also, spawns were a bit inconsistent at times due the swiftness in which a player can navigate the map using exo-suits. Hence, the reason why there was no need for an anchor.

When you look at any team-based sport; every single competitor has a designated role. This allows for team cohesion and the ability to play at each individual’s highest strengths. It also allows for a more strategic version of play, something that Advanced Warfare’s Hardpoint lacked. The game forced players to fit into a slayer dominant mindset, eliminating the need for even a primary objective player. This hurts the competitive aspect of the game, due to the fact that everything is so straightforward and there’s no variation. As little as an issue this is, it’s the little things that build up a successful eSport title.

In my opinion, CoD eSports for Advanced Warfare wasn’t that much better off than Ghosts. Both titles lacked major and minor features that Black Ops II included. That’s why we still see approximately 100,000 gamers playing BO2 on Xbox 360 every night, during the week; the game is still a fan favorite. Yes, Sledgehammer seemed more involved in eSports than Infinity Ward, but the stream views have continued to fall, whether the developers like it or not.

The game is too fast paced to follow as a first-time viewer. For someone that is new to watching competitive CoD; games may seem quite confusing, with the players using their exo abilities such as Overclock – fast paced running, along with their thrusts. During events, commentators try to help spectators understand the game through analyzation, basic terminology, and CoDcastor, but sometimes that doesn’t help.

With the first-person point of view switching so often during a match, things would go straight over my head, if I decided to watch an MLG event for the first time. Within the world’s largest and most successful eSport, Riot Games’ League of Legends , and other Multiplayer Online Battle Arenas, the games are a bit more lengthy and provide a top-down view of the three-laned battlefield. The early stages of a LoL match may seem slower and have less action, in comparison to CoD’s more sporadic-like, thrown into the game ordeal. This leads one’s interest and investment away from the game.

All in all, I’m pretty burnt out from the past two games. I’m ready for Black Ops III, because we get to enjoy the well-built game and competitive support from the developers, especially from Treyarch Studio Design Director David Vonderhaar , that we have so patiently needed for the past two years of competitive CoD.

We asked our Twitter audience what they thought on the return of an anchor role utilized in Black Ops II’s Hardpoint, the responses were quite positive.  Here are the results:

What should be done?

Black Ops III developers Treyarch have confirmed that Hardpoint will be making its return back into the CoD eSports rotation for this upcoming season of CoD. This year’s version of Hardpoint cannot be like Advanced Warfare’s inadequate attempt. Some enjoyed it, especially after playing Domination for a year, but almost everyone would prefer BO2’s style. The game needs to bring back the versatility of having dedicated objective, slayer, support and anchor roles. Treyarch has recognized the need for more strategy and has implemented a new specialist system to help with that.

Specialists will play a vital role within BO3, as each player on the same team in a competitive match must use a different character. Treyarch has confirmed eight specialist characters so far for the upcoming title, which include: Battery, Nomad, Outrider, Prophet, Ruin, Seraph, Spectre and Reaper . Each character provides a different specialty, which could be used in different roles within the gamemode of Hardpoint.

As an objective player, you may want to use Ruin, which has the ability of Overdrive , allowing you to sprint faster throughout the map, as if you were using the perk Lightweight from BO2, or the exo ability Overclock from AW. As an anchor, I’d most likely want to apply the Nomad or Outrider specialists, which allows the ability to recover from the position of your death, or to reveal enemy positions within your location respectively. A slayer may want to use Seraph, which gives an added bonus towards scorestreaks once activated, and so on.

Different roles will use different specialists, making the game more versatile and unique. This also allows more leeway if your preferred specialist is banned during the draft period prior to the game. You’ll have the ability to fall back on the second most important character for you. The meta of the game will be constantly changing, and it’ll be interesting to see what is and is not applied in-game.

Throughout the showcase matchup between Team Kivi and Team TeePee at the eSports Briefing during gamescom 2015, commentators Clint “ Maven ” Evans and Matthew “ Mr. X ” Morello talked in detail about how important specialists will be in Hardpoint matches for competitive CoD starting at 2:07 minutes.

It makes the game more competitive, skillful and tactical. Dedicated roles are seen in League of Legends, which requires the need for a Solotop, Mid, Jungle, AD Carry and Support role. In competitive LoL, five players are utilizing five different roles.

In addition to the added strategic factors implemented in Black Ops III eSports, a new movement system will be crucial to how Hardpoint plays out. The game will be similar to Advanced Warfare’s pace, as stated in BO3’s game description, but will still be dependant on traditional movements such as running and mantling.

With Black Ops 3, Treyarch premiers a new momentum-based chained-movement system, allowing players to fluidly move through the environment with finesse using controlled thrust jumps, slides, wall runs, and mantling abilities in a multitude of combinations, all while maintaining complete control over your weapon at all times. Maps are designed from the ground-up for the new movement system, allowing players to be successful with traditional movement, as well as advanced tactics and maneuvers.

There is no doubt the game’s movement will be faster than that of BO2’s, and will still feature thrust jumps and wall runs to navigate the map quicker. However, traditional movement is seen to be utilized a lot more in BO3, and the pace seems to be a lot more controlled than in Advanced Warfare.

One of the best matches to showcase how ebullient Black Ops II’s version, was the Slums – Hardpoint game that took place at MLG Anaheim 2013 during the Grand Finals between two dynasty squads, world champions IcoNs Impact and compLexity Gaming . This event was an important one, as coL dethroned Impact from their undefeated streak.

Starting at 10:12 minutes , going into the last two hills, compLexity began to execute seamlessly, with Patrick “ ACHES ” Price slaying and protecting the hill, Tyler “ TeePee ” Polchow playing objectively gaining points and trading effectively with Aches, James “ Clayster ” Eubanks anchoring in the back of the spawn near the fountain behind the garage, and Ian “ Crimsix ” Porter supporting Clay by holding the left side of the map around garage.

This was one of the best highlights from the event, with each of compLexity’s players performing their roles outstandingly. Crimsix had quite the play in garage moments after, with hype circulating from his teammates and the crowd at the event. This is Call of Duty eSports.

Stay up-to-date with Black Ops III eSports information over at our Twitter – @eSportsNation .