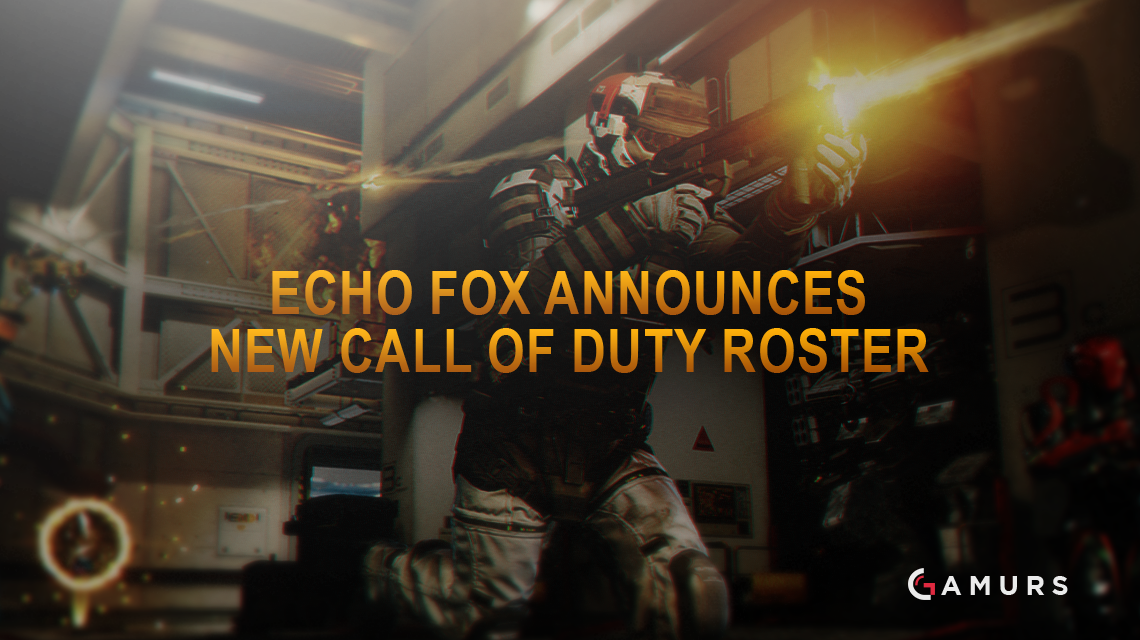 After a slightly dismal foray into Call of Duty: Black Ops III, Echo Fox has announced its revamped roster for Infinite Warfare.

“This team is filled with tons of potential,” Neslo told GAMURS. “It’s different because all the players are younger than me, but at the same time all have pretty good experience behind them from past events.”

Neslo is a Call of Duty veteran. A large name and popular figure in the scene, Neslo is most known for his long stints playing for Team Kaliber, one of the most storied and successful organizations in competitive Call of Duty. Consistently finishing within the top eight in the majority of his tournaments, Neslo has been in a bit of a slump as of late during the end of Advanced Warfare and the entirety of Black Ops III. Ready to bounce back and prove he is still a contender, Neslo has faith in his new squad.

“I’ve never been a part of a team that shares this strong of a vision and goal,” Neslo said. “I feel the energy from these guys the second I hop on the game to play.”

Methodz is another major name that all competitive Call of Duty fans should recognize. While he began playing Modern Warfare on the PlayStation 3, Methodz did not enter the competitive scene until playing Modern Warfare 2 on the Xbox 360. At the young age of 16, Methodz immediately became a top contender, playing for the likes of SoaR Gaming, FaZe Clan, Team Curse, Team Kaliber and more. Similarly to Neslo, Methodz hit a rough patch during Black Ops III and concluded his year by falling out of the Call of Duty World League Championship in the group stage with Most Wanted. His individual talent is undeniable, however, and his skill and veteran leadership ability should bring a new edge to this Echo Fox squad.

If you keep an eye on young talent in the scene, you know who TcM is. He entered the scene just two years ago, but he has made his name known. TcM has played for storied organizations such as Rise Nation, Team Orbit and Most Wanted, though he was barred from competing during the majority of Black Ops III due to age restrictions. Once he could play again, TcM teamed up with Methodz on Most Wanted for the Call of Duty World League Championship and saw slight success, considering it was his first major tournament after returning to competitive play. The young gun is ready to continue proving himself, and the leadership from Neslo and Methodz will surely help mold him as a player.

Similarly to Echo Fox’s last Call of Duty roster, the fourth player is a little less well-known than his teammates. Last time, it was Josh “Cyborg” Kimp, and he proved himself to be one of the better players on that roster for the entirety of their time together. This time, it’s Mosh. Relatively young and inexperienced, Mosh actually played with Methodz on SoaR Gaming back in 2012 before practically disappearing from competitive play. The result of that partnership? A top five finish at UMG Chicago. Mosh really got back to competitive during Black Ops III, playing under Most Wanted, VexX Gaming and In2ition. Every squad was thought to have potential, but the rosters full of young players never panned out. If Mosh can be guided by Neslo and Methodz, he could become a dominant force and surprise the entire scene.

Jace Hall, CEO of Echo Fox, has full faith in his new roster.

“I would like to personally welcome Methodz, Teegan, and Mosh to Echo Fox,” Hall said. “Our Captain and GM Neslo has been sending glowing reports of their work ethic and dedication to winning and I feel they are a perfect fit for Echo Fox. I look forward to watching them compete and bring home championships.”

To most people, this roster likely looks like a group of misfits. Neslo has been in a slump for, depending on who you ask, quite some time now. Methodz has never quite returned to his early glory. TcM and Mosh are both relatively unproven. All of this may be true, but these players know their issues, and the roster undeniably has potential to grow if the veterans step up and everyone works together. Each one of these players brings something unique to the table, and now they need to mesh and become a cohesive unit.

“I want Echo Fox to be about working hard, and quality over quantity,” Neslo said. “All of the players on this team, including me, have something to prove this year.”

What do you think of the new Echo Fox? Will the mix of young talent and veteran leadership work out? Let us know your thoughts in the comments below or tweet us @GAMURScom.