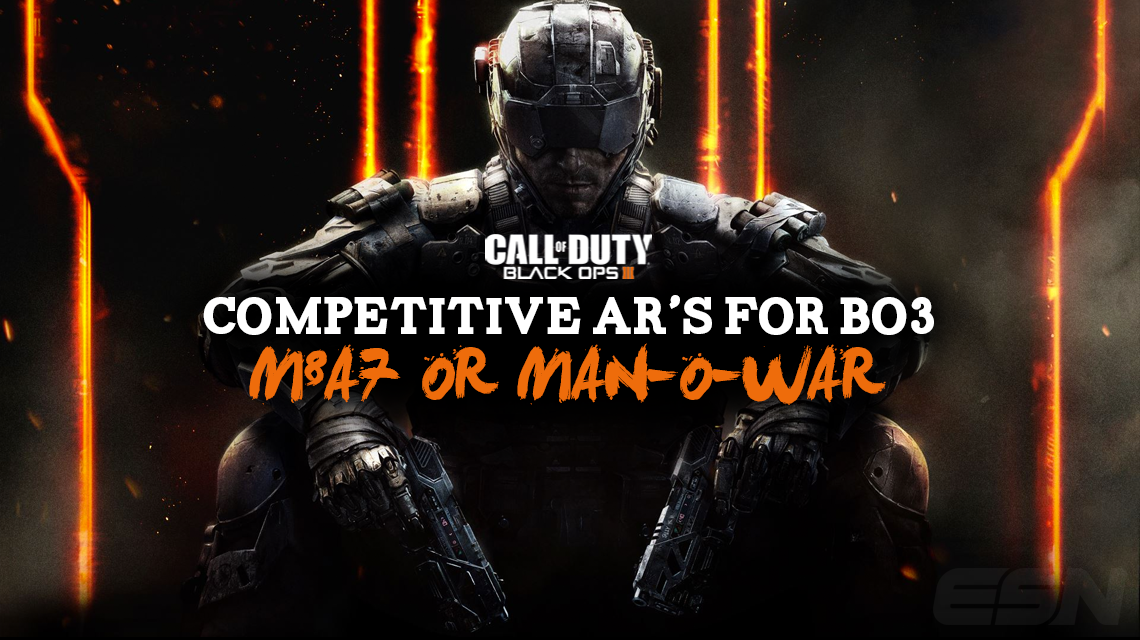 With the official release of Call of Duty®: Black Ops III’s beta, discussion has risen among the Call of Duty eSports community on what weapons will be competitively viable. There are usually at least one-to-two dominant weapons within the “Assault Rifles” category, and we see it again through the familiar face of the M8A7 and automatic powerhouse of the Man-O-War .

In short, both these weapons are phenomenal for competitive play. It seems that they can coexist together for the upcoming Black Ops III season of Call of Duty eSports. The question is, which weapon do prefer in certain scenarios and why?

The M8A7 would preferably be the majority’s first-choice, having used its older brother, M8A1 , in Treyarch Studios’ previous competitive game title, Call of Duty®: Black Ops II . I know it’s definitely mine, having been an Anchor in Black Ops II. Similar to its predecessor, the M8A7 continues to fire a four-round burst of accurate hellfire. The only thing that seems terrible about the M8 is that it’s unlocked at level 28 in public multiplayer.

As described within the beta’s Create-A-Class menu, the M8A7 is a “4-round burst rifle. High cyclic rate of fire with minimal recoil.” While the M8A7 has a lower damage and fire rate due to being a burst weapon compared to the automatic Man-O-War, it makes up for that in its range and accuracy.

Within the current “meta” of the game, it’s preferable to run a Reflex sight as your optic , as wells as Quickdraw , Stock and Grip as your attachments. Unlike Black Ops II, the majority of the competitive community like to run Grip on the M8A7 as aforementioned. OpTic Gaming player, Ian “ Crimsix ” Porter, describes Grip’s ability on the M8A7 perfectly in one of his recent videos , “Grip equals gunfight wins. Like this gun does not move. It’s kind of a laser beam.”

As shown in Crimsix’s video, he showcases the weapon by finishing out the game 75-19. Through this gameplay, it’s quite evident that this is arguably the best AR in Black Ops III’s beta stage. The M8A7 has the ability to easily two-burst players from medium-range if most of the bullets connect. It can even one-burst the opposing player depending on how close and accurate you are during a situation.

When it comes to distance, the M8 wins hands down. The weapon is optimized to hit targets at medium-to-long ranges due to being a four-burst weapon, making it the premier weapon of choice on larger Black Ops III maps, similar to the long-laned map of Hunted within the beta.

Another excellent feature returning from Black Ops II is the ability to shoot through walls, rather known as “wallbanging,” which can be done against your opponents on certain infrastructure with certain weapons; one being the M8A7. Even though the M8 has a lower rate of damage compared to the Man-O-War, it can still penetrate through walls at close-to-medium ranges. It’s the easiest to shoot through or near the door’s frame when trying to kill an opposing team’s player. Whether it’s the wood from the main house on Hunted or the metal material from Combine’s buildings, the M8 can still do wonders.

As fun as this weapon is to shoot, it’s quite possible that it will be “nerfed” (decreased in overall strength) before the game’s official release on Nov. 6, 2015. We actually got to see it banned immediately within the second game’s “Ban/Protect” pre-game stage, during the showcase matchup between “Team Kivi” and “Team TeePee” at gamescom 2015’s Black Ops III eSports Reveal in Cologne, Germany. It may even be nerfed before the end of the Xbox One and PC betas, similar to how the Razorback had an increase in recoil during the PlayStation 4 beta.

The Man-O-War is not just good, it’s great

While the M8A7 may be dominant in range and accuracy, its competitor, the Man-O-War, seems to be great in everything. It’s the second AR that is unlocked within the beta at level two, making it easier to gain and utilize within public multiplayer. It’s a well-balanced weapon as of now, and is what I like to call an “automatic powerhouse.”

The preferred setup for optics and attachments on this weapon are similar to the M8A7. For optics, the Reflex sight is the favorite. Note that the Iron Sights on the Man-O-War are really minimal in my opinion, and if you’re use to them, you can do without any optics to save up a slot in your “Pick 10.” For primary attachments, Quickdraw and Grip seem to be on the top of everyone’s list for any AR. If you’re willing to sacrifice the sight or another slot, Stock would be the next attachment on the list.

As its description states, the Man-O-War is a “Full-auto assault rifle. Strong damage with a slow fire rate.” In comparison to the M8, the stats are a lot more comfortable to the player with this AR, being the most balanced AR within your arsenal. If it were an SMG, it would most definitely be the Kuda from a statistical point of view. Similarly, it’s easy to maintain recoil for your accuracy, and provides the needed damage, fire rate and range.

While the fire rate may be slow, it’s a fully-automatic weapon, and when mixed with such a high damage input, it makes up for close-up engagements. It’s quite effective in damage for the close-to-medium range, and kills your opponents quickly, if you can hit their upper body accurately. One downside to this weapon is its recoil, due to automatic fire. If you can control it, you can dominate with it. The recoil is what hurts this weapon the most in long-range gunfights.

As you can see within the video, it’s quite easy to win close engagements against other AR’s and SMG’s, and to break into hills during the fast-paced respawn gamemode of Hardpoint . It’s quite possible that we could see a scenario for Anchors utilizing the M8A7 for long distance engagements, while aggressive Slayer and Support players use the Man-O-War for closer gunfights near or in the hills.

Whether you are inclined to pick the M8A7 or Man-O-War as your primary Assault Rifle is up to you. Each weapon has its own strengths and weaknesses, and you may use one or the other depending on the team you’re playing, map, scenario and situation. Note that every Call of Duty seemed to have elected at least two competitive AR’s: Black Ops II had the M8A1 and FAL OSW , later AN-94 . Infinity Ward’s Call of Duty®: Ghosts had the Remington R5 and SC-2010 . Sledgehammer Games’ Call of Duty®: Advanced Warfare had the BAL-27 and Integrated Munitions Rifle (IMR) . Now it seems that Black Ops III will continue to follow that path and will have the M8A7 and Man-O-War for primary Assault Rifles.

Do you prefer the M8A7 or Man-O-War in Call of Duty®: Black Ops III’s  Beta ? Let us know. Stay up-to-date with more beta features over at our Twitter – @eSportsNation .