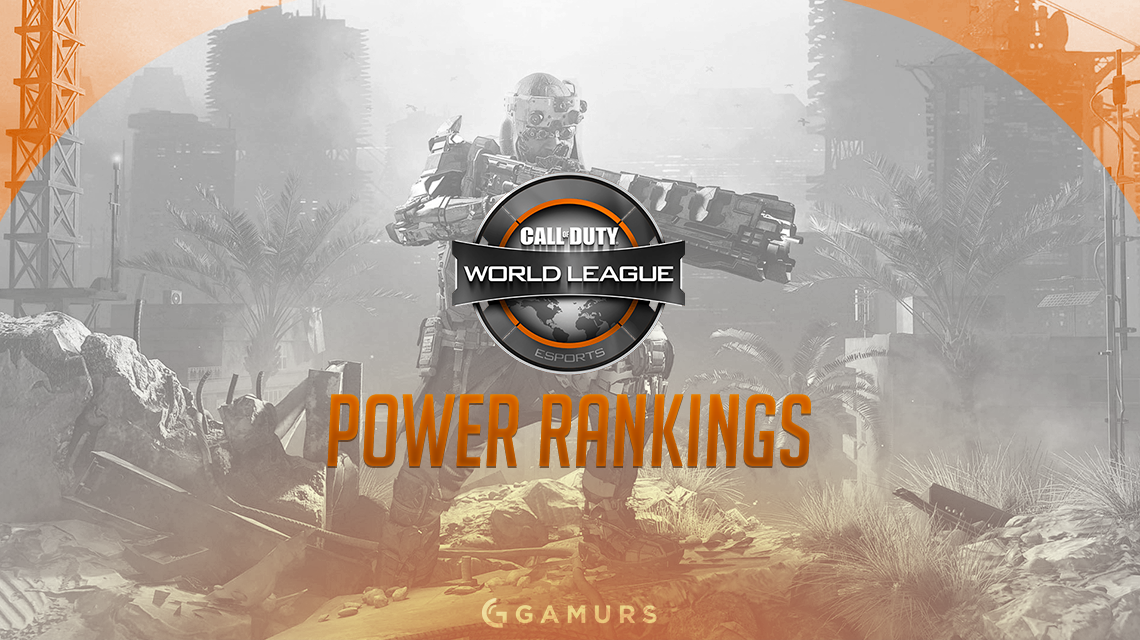 Yet another week in the Call of Duty World League for Call of Duty®: Black Ops III has concluded, which means that it is time for an updated edition of GAMURS’s power rankings for the North American teams participating in this league.

OpTic Gaming remains in the number one spot of our power rankings once again after going 2-0 in Week 6 to bring their Stage Two record to 8-2. OpTic was able to defeat Dream Team 3-1 and FaZe Clan 3-2, and they will try to continue their win streak when they face off against Hundred Thieves and Rise Nation in Week 7.

Despite going 1-1 in Week 6, Rise Nation hold on to their second spot in our power rankings. Rise started off the week with a 3-2 loss to Team EnVyUs, but bounced back with a 3-1 win over H2k-Gaming, pushing their record to 7-3 on the season. In Week 7, Rise will have their work cut out for them when they take on Team eLevate and OpTic Gaming.

FaZe Clan went 1-1 in Week 6, but were still able to move up two spots in our power rankings. Now with a record of 7-3, FaZe took down Team SoloMid 3-0 before losing a close 3-2 match to OpTic Gaming. FaZe will look to regain their momentum when they go up against Cloud9 and Luminosity Gaming in Week 7.

After an interesting 1-1 showing in Week 6, Team EnVyUs has moved up two spots in our power rankings. EnVyUs began the week with a great 3-2 win over Rise, but then suffered a shocking 3-1 loss to compLexity Gaming. In Week 7, EnVyUs will put their 6-4 record to the test when they play against eLv and H2k.

H2k-Gaming has dropped down one spot in our power rankings after going 1-1 in Week 6, defeating Hundred Thieves 3-1 but losing 3-1 to Rise. Now with a record of 6-4, H2k will try to get back on track when they face off against EnVyUs and coL in Week 7.

The biggest difference in our power rankings is Dream Team, who have dropped down three spots since last week. dT went 0-2 in Week 6, losing 3-2 to eLv and 3-1 to OpTic. In Week 7, dT will try to improve on their 6-4 record when they take on TSM and C9.

Team eLevate remain in the seventh spot of our power rankings after going 2-0 in Week 6, defeating both dT and Hundred Thieves 3-2, improving their record to 6-4. eLv will look to stay hot when they go up against EnVyUs and Rise in Week 7.

A 2-0 performance in Week 6 has helped Luminosity Gaming move up two spots in our power rankings. Luminosity defeated TSM 3-0 and C9 3-1, bringing their Stage Two record to 4-6. In Week 7, Luminosity will try to continue their recent winning streak when they play against coL and FaZe.

Dropping down one spot in our power rankings is Hundred Thieves, who went 0-2 in Week 6 with a 3-1 loss to H2k and a 3-2 loss to eLv. In Week 7, the newly-revamped Hundred Thieves roster will try to ameliorate their 2-8 record when they take on OpTic and TSM.

compLexity Gaming remains in the eleventh spot of our power rankings despite going 1-1 in Week 6. coL began the week with a 3-1 loss to C9, but responded with a big 3-1 win over EnVyUs. With their record now sitting at 3-7, coL will try to pick up some important wins when they go up against Luminosity and H2k in Week 7.

Finally, Team SoloMid are still in last place of our power rankings after they went 0-2 once again in Week 6. TSM did not even win a map last week, losing 3-0 to both Luminosity and FaZe, bringing their record to 1-9 in Stage Two. In Week 7, TSM will try to figure something out when they play against dT and Hundred Thieves.