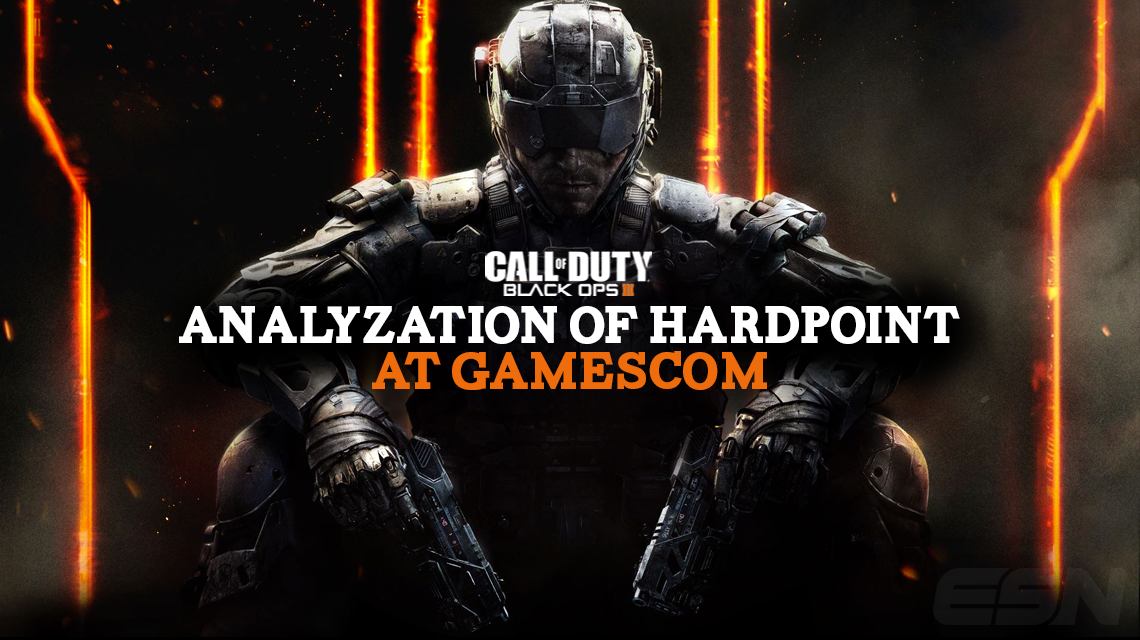 After spectating the eSports Briefing showmatch at gamescom 2015 , it appears that the fan favorite, classic gamemode of Hardpoint has returned for Call of Duty®: Black Ops III . How similar will this version be compared to its predecessor?

Following up on our recently released editorial on “ The Return of Classic Hardpoint? ,” we were able to look over the best-of-three showcase matchup between Team Kivi and Team TeePee at the eSports Briefing at the ESL Arena in Cologne, Germany. Both teams played one Hardpoint game on the map Combine , which was broadcasted live:

Not much could be deciphered from the live gameplay, but after rewatching the match and focusing on the minimap in the upper lefthand corner, it was quite noticeable that spawns seemed to work more appropriately in a pattern, compared to Sledgehammer Games’ version of Hardpoint seen throughout Call of Duty®: Advanced Warfare .

For example, something that was quickly noticed off the back was when PLT.Mindfreak player Mitchell “ BuZZO ” Mader began “ anchoring ” at the six minute mark within the second hill of the match. The second Hardpoint was located towards the end of Combine, allowing BuZZO to hold the spawns for his team, while obtaining a few kills.

When he was pressured by more opponents, and/or lost control of his position, his teammates began to spawn in front of the hill and farther away rather than behind it. After Team Kivi was able to gain substantial time off of the first 30 seconds of the second hill; Team TeePee replied, quickly gaining control of the anchor as seen on the minimap at 6:50 minutes . TeePee’s teammates began spawning closer behind the hill, while Kivi’s players were forced to make a longer run from in front of the second Hardpoint.

When asked about whether or not dedicated roles would be returning to Black Ops III, and if this version felt like its predecessor, BuZZO told us this:

Oh 110%. I mean that was only on that map, but I think all the maps will be the same. Dedicated roles will be a thing again for sure.

Note that the game was still in its pre-beta stages at gamescom, so anything could happen between now and its official release on Nov. 6, 2015. Also, there’s been no confirmation on whether or not Hardpoint will be similar to Black Ops II, but it looks like it. Lets see what you can do Treyarch.

Do you believe that Black Ops III’s version of Hardpoint will bring back the dedicated roles, similar to the popular anchor role? Let us know. Stay up-to-date with more #BlackOps3 news over at our Twitter – @eSportsNation .