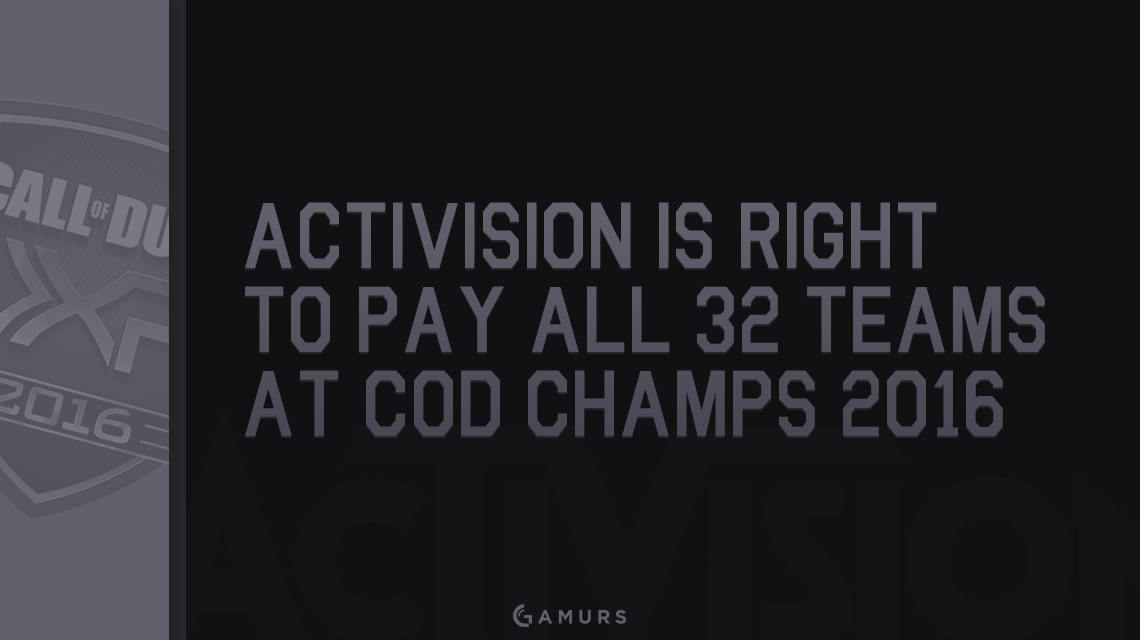 Esports had humble beginnings. Players competed more for bragging rights than the small prize pools, as Justin “Pacman” Tucker explained in a recent PlayStation blog. He has been involved in Call of Duty esports for the past decade. Once, he and his teammates won a tournament and took home the largest prize pool the game had ever seen at the time: $350. Things have changed a lot since then.

Call of Duty esports has had a grand restructuring this year, and with it came a lot of ups and downs. Activision, the game’s publisher, has invested a lot more money and effort in the scene by founding the Call of Duty World League. They have also upped the prize pool for the Call of Duty Championship, which began at $1 million a few years ago and is now $2 million. The prize pool breakdown has also been revealed and has seen significant changes. Now, all 32 attending teams will leave with money instead of just the top eight.

Normally, the prize pool distribution is a non-topic, but this time around, the changes have a lot of people talking. Pro players have been some of the most adamant about the changes, even stating opinions that go against their own best interests. Some state that the difference between first place and second is too drastic. Others believe paying out all 32 teams is unnecessary.

Former Call of Duty Champion, Patrick “ACHES” Price, has been very vocal about the prize pool distribution. He has been through the tournament many times and knows exactly what it takes to win it all. ACHES thinks the distribution this year is flawed.

I need whatever this person was smoking that thought this was a good idea. pic.twitter.com/Yob7Cym9Il

It seems that what ACHES is most upset about is the fact that every team attending, even those who place 17-32 after potentially winning zero maps, will still earn part of the prize pool. To be clear, the bottom 16 teams will each earn $15,000 to split amongst the four players. In total, this comes out to 12% of the total prize pool going to the bottom half of the competition.

To ACHES, low placing teams don’t deserve to come away with a prize. “I would rather go and make $0… [than go] there knowing I can do absolutely nothing and take money away from people who deserve it for performing well. And if you disagree you just aren’t a true competitor plain and simple,” he said on Twitter.

Other pro players, such as Loony, agree with ACHES, saying, “The fact that placing 5th gets you the same money as previous Champs is sad along with the rest of the prize breakdown.”

Due to the prize pool doubling from $1 million to $2 million, all of the top 32 placings will see a minimum of 20% increase in prize money except for fifth place, which, at $70,000, is the same as previous years.

The reaction pro players are having comes from their competitive nature. They have all been competing for years and the general format has been the same: at large tournaments, the top eight place in the money. That is simply tradition. Though, it doesn’t have to be that way. It could be that the top four are the only ones to earn money. Or if you want to be super competitive about it, only pay the team that gets first place.

By paying every team attending, Activision is investing in the future of the Call of Duty World League. They are promoting sustainability instead of creating a lopsided infrastructure where only the top teams manage to earn money. To tell you the truth, it’s already bad enough as it is, what with OpTic Gaming winning all of the tournaments, obtaining all the sponsors, and on top of that, living well off of YouTube and their other social media platforms. A situation like this, in my opinion, would eventually lead to a decrease in competition if lower placings teams, albeit top tier teams, don’t manage to earn any income from LAN events.

Some may say the prize pool distribution takes away from the competitiveness of the tournament. First of all, players should always be playing to win. Second of all, there is a drastic difference in prize money based on the placings. In fact, the first place team takes home $800,000, 53 times the amount teams that don’t make it out of groups get, and double what the first place team earned in years past. As said before, all other placings are also earning at least 20% more money than in previous years (except fifth place). Lastly, competitive Call of Duty is no longer a hobby, it’s a career for many players. Activision seems willing to agree with that, because supporting the esports scene can also increase the longevity of the Call of Duty franchise.

I personally think think pro players complaining about the prize pool breakdown are arguing against their own self interests. It’s not often that you see people scoff at the idea of being able to earn more money, yet here we are. I understand, the players believe low placings at CoD Champs are undeserving of compensation, but they are focusing on the wrong thing. So in response to ACHES, who said you aren’t a true competitor if you think all the teams attending CoD Champs deserve compensation, stop whining about the prize pool and focus on what really matters in the first place: winning.

Do you think that all 32 teams should be paid at the 2016 Call of Duty XP event? Let us know by commenting below or tweeting us @GAMURScom. Contact Josh Billy at [email protected] or @Orbit_CH3MISTRY.