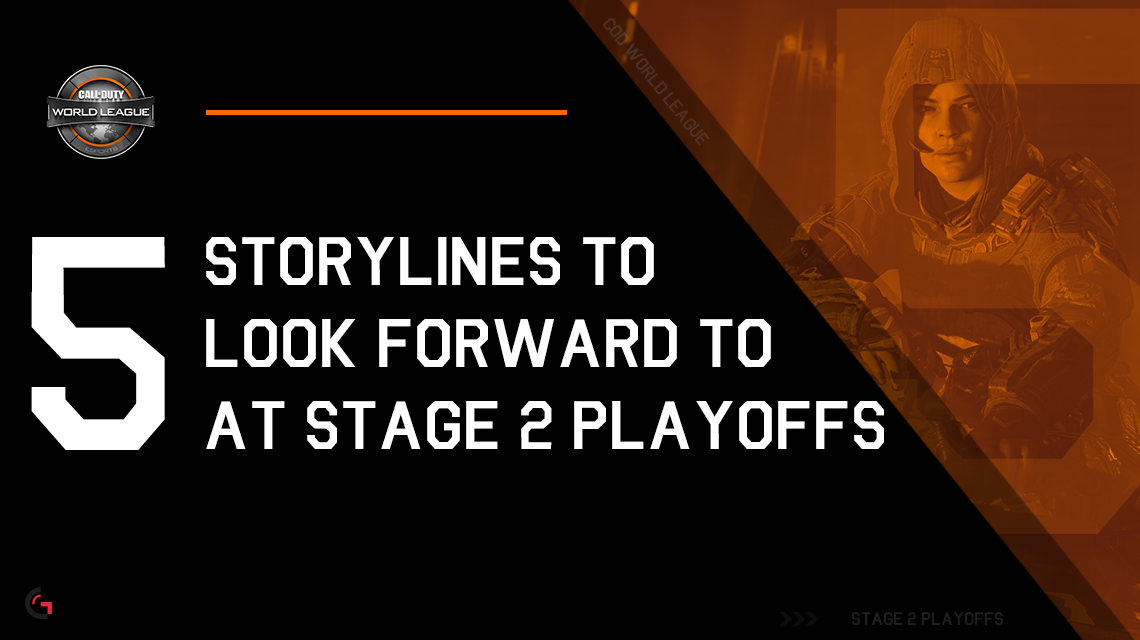 The Call of Duty World League Stage 2 playoffs are just a few days away. Qualifying teams from all three regions converge in Burbank, California at ESL Studios to compete for over half a million dollars in prize money. Here are the storylines to keep an eye on:

Few teams in any esport have had as long a reign as Mindfreak in Australian Call of Duty. The current roster consisting of Fighta, Dean, Shockz, and BuZZo have teamed together since the start of Advanced Warfare and their achievements as a team have been stellar. Mindfreak’s first recorded tournament win dates back to the 2015 APAC Regional Finals and carried on to their sixth place finish at the 2015 Call of Duty Championship. Only dominance has followed.

But with the inception of the Call of Duty World League, other teams in Australia/New Zealand have other ideas. Organizations like Team Orbit, Tainted Minds, Chiefs, and Immunity have all given Mindfreak quite a challenge this year, enough to prevent Mindfreak from going into the Stage 2 playoffs as the first seed.

The current number one seed in ANZ is Team Orbit. The team of Swiftaz0r, Nimble, Bacabec, and Zeuss has had a tremendous season. Bacabec and Zeuss joined the team after Stage 1 and have brought top notch experience to the roster, strengthening the team and leading them to a 12-2 season. Orbit will face Team Immunity in their first match at the Stage 2 playoffs and hope to move on to face the winner of Mindfreak vs. Chiefs. A tournament win would allow them to stake a legitimate claim for best team in Australia/New Zealand, but that’s easier said than done.

Europe is Impossible to Predict

Predicting the outcome of the European Call of Duty is next to impossible. Trust me, I tried. Ahead of the Gfinity Summer Masters, where all of the European teams we will be seeing in the playoffs competed, I made an attempt at predicting the outcome. Because of Infused’s performance at MLG Anaheim, I pegged them winning the tournament. I was so wrong. At Gfinity, Infused didn’t even manage to make it through the group stages unscathed, where they lost a series to Exertus, a team who failed to even qualify for the playoffs. In the knockout stage, they faced and lost to Millenium first round (a match I predicted would be the final and go the other way).

European Call of Duty is nearly unpredictable and that is what has made it so exciting to watch this year. All of the teams competing have a shot at winning, and each of them has their own story full of glamour as well as hardship.

Take Millenium for example. They won the Stage 1 finals and then received an invite to the Crown Invitational in Australia where they had the chance to face OpTic. Then when Stage 2 came around, the team nearly fell apart. Luckily, they stuck it out but qualifying for the playoffs was not a sure thing. It came down to the last day of matches before Millenium were able to sit back and relax. They do have at least one achievement not many teams can boast though: they beat OpTic Gaming. At ESWC, Millenium took a series off the world’s best team, putting them in an elite club.

The other European teams have also seen success this year. Splyce, for example, placed second in the Stage 1 playoffs, second at ESWC, and just recently won Gfinity Summer Masters with a 4-0 blowout in the finals. They took down Rise Nation when they were in their prime and only lost steam when they traveled to the United States and placed poorly at MLG Anaheim. However, Splyce is determined to not let one bad placing get in their way and will be a force to reckoned with at the playoffs. But first, they need to take down Supremacy, who have taken Vitality’s spot as the best French Call of Duty team. The last two teams attending the playoffs include Epsilon and top-ranked HyperGames, both of which have European CoD veterans filling their rosters. Care to predict the outcome of this one?

Those That Didn’t Make It

In North America, it was quite a surprise when Team eLevate failed to make a reappearance in the playoffs. After they placed second at MLG Anaheim, where they gave OpTic their biggest challenge of the tournament, eLevate were thought to be at top team in the North American Call of Duty World League. Then they just couldn’t win. Eventually, eLevate found themselves on the brink of elimination from playoff contention and put up a good fight, but missed their shot and now their road to the Call of Duty World League Championship is a lot more difficult.

Other teams that didn’t make it to the playoffs in North America include Team SoloMid and compLexity, who both played in the Stage 1 playoffs, and 100 Thieves. Nadeshot’s organization, 100 Thieves, finished at the bottom of the CWL ladder and were immediately disbanded once the season was over. The players on the team, led by former Call of Duty champion Patrick “Aches” Price, will likely find new homes as they prepare for the Call of Duty World League Championship.

In Europe, the most notable team not in the playoffs is the French Team Vitality. Vitality finished the season with a single win. They made an attempt to improve their roster early on by bringing over North American player TwiZz to compete, but visa issues prevented him from playing a single match for the team.

At the start of the season, two organizations sat at the top of the CWL standings for the first time in their history. H2k, an organization new to Call of Duty, and Dream Team, who have stuck it out long enough to finally make a name for themselves, looked to become the new powerhouse teams at the beginning of Stage 2. H2k began with a nice 5-1 streak, recording a surprising win over OpTic Gaming in the process. Dream Team also started 5-1 and defeated both FaZe Clan and Rise Nation to do so.

Both teams were present in Stage 1 of the Call of Duty World League and both of them faced relegation. They also both scraped by, winning their relegation matches 4-3. H2k made an impressive reverse sweep of Team Liquid to do so. You could say the two teams have been side by side all year, experiencing the same ups and downs.

Their parallel stories didn’t end at 5-1. As the season went on, both teams began to struggle. Dream Team took a series of losses that put their record close to 0.500. In fact, they finished at 11-11 and so did H2k. As the season came to an end, dT and H2k had their heads just above the water, making it to the last match of the season before knowing whether they were in the playoffs or not. H2k and Dream Team faced the number one and two teams, respectively, and they both lost. Luckily for them, Team eLevate also lost their matchup, eliminating themselves from playoff contention and sending H2k and dT through.

As it stands, both teams sit just below sixth place in terms of CWL Points earned this year. The top six teams earn automatic invitations to the Call of Duty World League Championship. Both H2k and dT have the opportunity to qualify outright at the playoffs, but they need to win their first round matches. H2k will face number one seed Team EnVyUs and Dream Team will face FaZe. Both are the underdogs, but that means very little when so much is at stake.

The current OpTic Gaming roster has an extensive list of achievements, many of which end in “1st place”. The core of the roster, Crimsix, FormaL, and Scumpi, have thirteen LAN wins together since the start of Advanced Warfare. With Karma, they have nine. Both Crimsix and Karma were part of the legendary compLexity/Evil Geniuses team that dominated throughout the end of the Black Ops 2 well into Ghosts. Throughout all of it, one name was there through it all. Crimsix.

On coL/EG, Crimsix earned himself thirteen LAN wins. His teammates may have changed slightly throughout, but Crimsix has remained the same. He is the winningest Call of Duty player of all time and is about to break his old record for event wins with a team if OpTic manage to win the Stage 2 playoffs.

Though OpTic Gaming comes into the playoffs as the second seed, they are the clear favorites to win. Their season was filled with struggles out of their control that led to a bit of drama between them and the Call of Duty World League management. At the end of the season, Crimsix and Karma were both suspended from playing one of their last matches, giving them a loss where they needed a win. However, second place is nothing for OpTic. They have been dominating the competition throughout the entire year and should have no problem facing Luminosity in their first matchup. This isn’t to say the team won’t be tested in the playoffs, but OpTic have weapons the other teams do not: four superstar players and confidence. If OpTic continues to win, will they displace coL/EG as the greatest Call of Duty team of all time?

The matches this weekend will be some of the best we have seen on Black Ops 3. Tune in at twitch.tv/callofduty!

Josh Bily can be contacted via email at [email protected] or on Twitter @Orbit_CH3MISTRY.