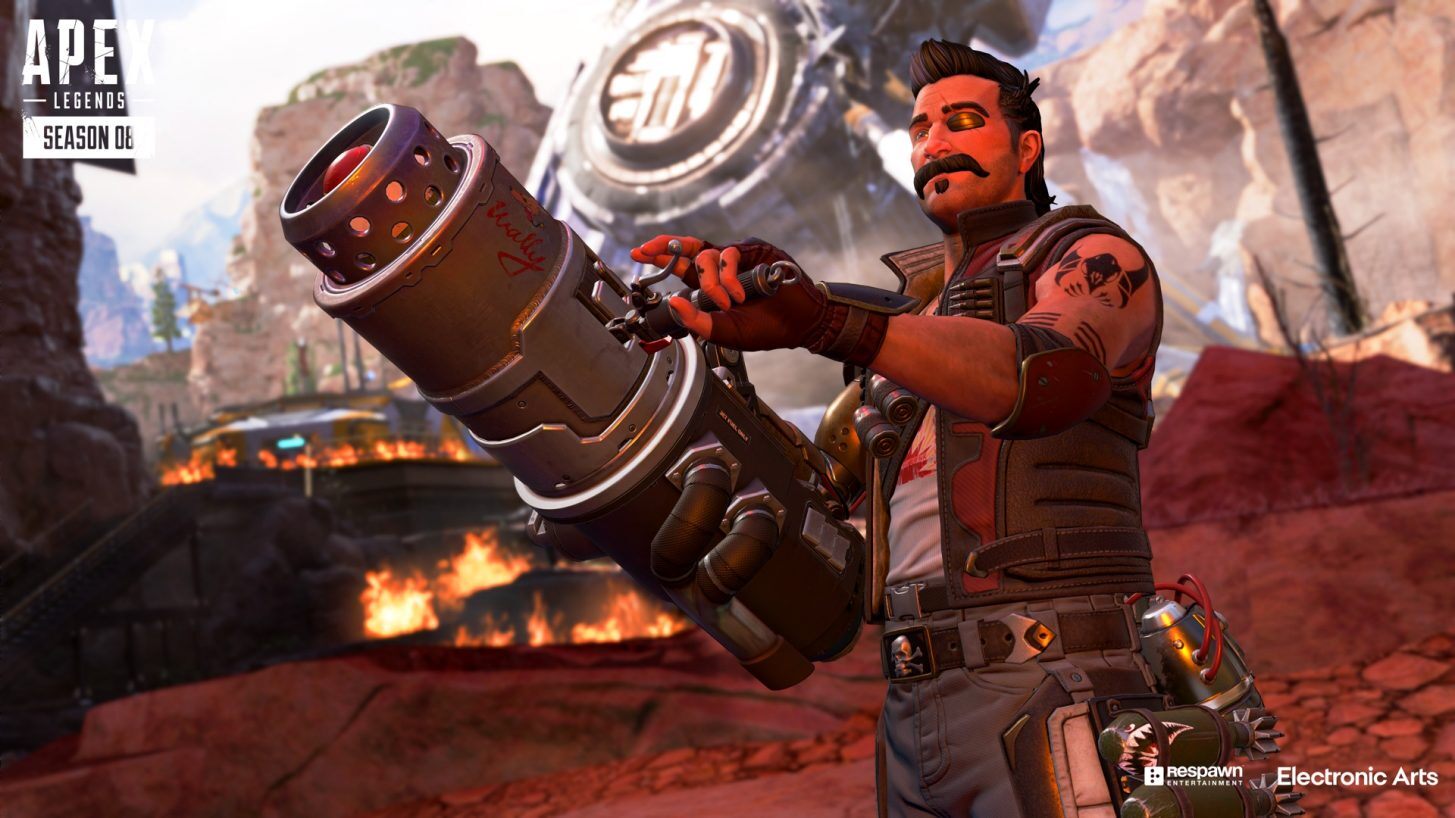 Old man Fusey’s been “puttin’ the bomb in bombastic” since his arrival in the Apex Games last year. There’s no better way for Apex Legends players to show off their flare than with some flashy skins, and Fuse certainly has an impressive collection of cosmetics.

Fuse hit the battle royale’s live servers in early 2021, and he’s received a number of legendary skins in the year following his release. Some of the Bombastic Bombardier’s skins are more rare than others due to their status as event-exclusive cosmetics. Others, like many of his release skins, are worth crafting simply for their unique designs and fun color patterns.

Here are the best Fuse skins in Apex.

Ever wanted to explore the Outback? Now’s your chance.

In this look, Fuse wears a brown ensemble fully equipped with chaps, gloves, and a cowboy hat. Different shades of leather and glossy metallic armor accent Fuse’s outfit, making him look pristine even when dressed for the outdoors. The plating around his knees resemble bull heads, and his cannon, jump jets, and shoulder piece are shaped like boars.

Not only is this skin incredibly detailed, but it’s also one of his more rare skins. Boared to Death first became available for purchase in season nine during a promotion to raise money for the 2021 Apex Legends Global Series Championship prize pool. The skins included in this promotion all shared an animal kingdom theme and came with similar weapon charms and banner frames. Boared to Death returned to the store a second time in March 2022 for 2,150 Apex Coins.

There’s always those players in online games who think they’re gods. But with Fuse’s Broseidon skin, players can actually roleplay as one—just get your swimsuits ready.

This Poseidon-themed skin reimagines Fuse as a mythical commander of the seas. The legend appears much more grizzled and aged in this look, sporting luscious locks of grey. He wears a toga over his purple and blue bodysuit, and the cannon on his back is shaped like a shark. To wrap up the look, Respawn Entertainment added a set of spikey naval mine-like grenades’ at Fuse’s hip and across his chest.

Broseidon released with the Dark Depths event earlier this year. Players could unlock this regal look for 2,400 Crafting Metals or 1,800 Apex Coins. Unlike other event skins, the Dark Depths offerings remained in the Customization tab for fans to unlock even after the festivities ended. It may not be as rare as the other entries on this list since it’s always available to craft, but Broseidon is still easily one of Fuse’s best skins for its unique design.

Out of all of Fuse’s skins, Cybernetic Payload is the most likely to turn heads, and it’s not because he’s shirtless. Well, that’s not the entire reason.

The way Fuse’s cybernetics are designed in this Legendary skin makes it seem almost as if they’re alive. The purple-tinted metal of his prosthetic arm reaches across his chest like a living creature, and it glows brightly with orange accents. Fuse’s trousers, eye patch, and accessories share a similar color scheme, and neon lava-like veins branch out across his bare skin.

This legendary skin was available for purchase while the Evolution collection event was live in season 10. Players could unlock the skin for 1,800 Apex Coins or 2,400 Crafting Metals.

One of Fuse’s most defining traits is his robotic arm; it represents the falling-out between him and his former best friend Maggie, after all. But what if Fuse had more cybernetics than just his arm?

Real Steel reimagines the Bombastic Bombardier as a near-full cyborg. In this skin, Fuse’s cybernetics have taken over most of his body except for his arm and head, both of which are heavily scarred. A timer, what looks to be a countdown on a bomb, is centered on his chest with a couple of wires snaking down his rib cage. A massive metallic shoulder piece and chest strap full of grenades tie this look together.

Fuse’s Real Steel skin arrived in the store as part of the character’s launch bundle in February 2021. It became available for purchase a second time during the 2021 End of Year sale.

If you’re looking to buy a Legendary skin to match your friends, Fuse’s Dread Captain skin is for you.

With his reckless nature, eyepatch, and prominent facial hair, Fuse is the perfect candidate for a pirate-themed skin out of all of Apex’s legends. In this look, he looks like a creature that swam up out of the ocean’s depths; his skin has adopted a sickly blue hue, his eyes glow a crimson red, and barnacle-like designs are scattered across one side of his clothing. His gold-accented attire gives him an air of royalty, and a red bandanna belt provides a perfect pop of color.

Respawn introduced matching skins for a number of legends with the 2022 Anniversary event. These cosmetics were based on previously existing skins; Mad Maggie and Bloodhound, for example, received similar outfits to Dread Captain Fuse. Squads could unlock Maggie and Bloodhound’s skins for 1,800 Apex Coins and 2,400 Crafting Metals while the event was live. Those who want a pirate-themed look for the Bombastic Bombardier can continue to unlock the skin in the Customization tab for 1,200 Crafting Metals to this day.