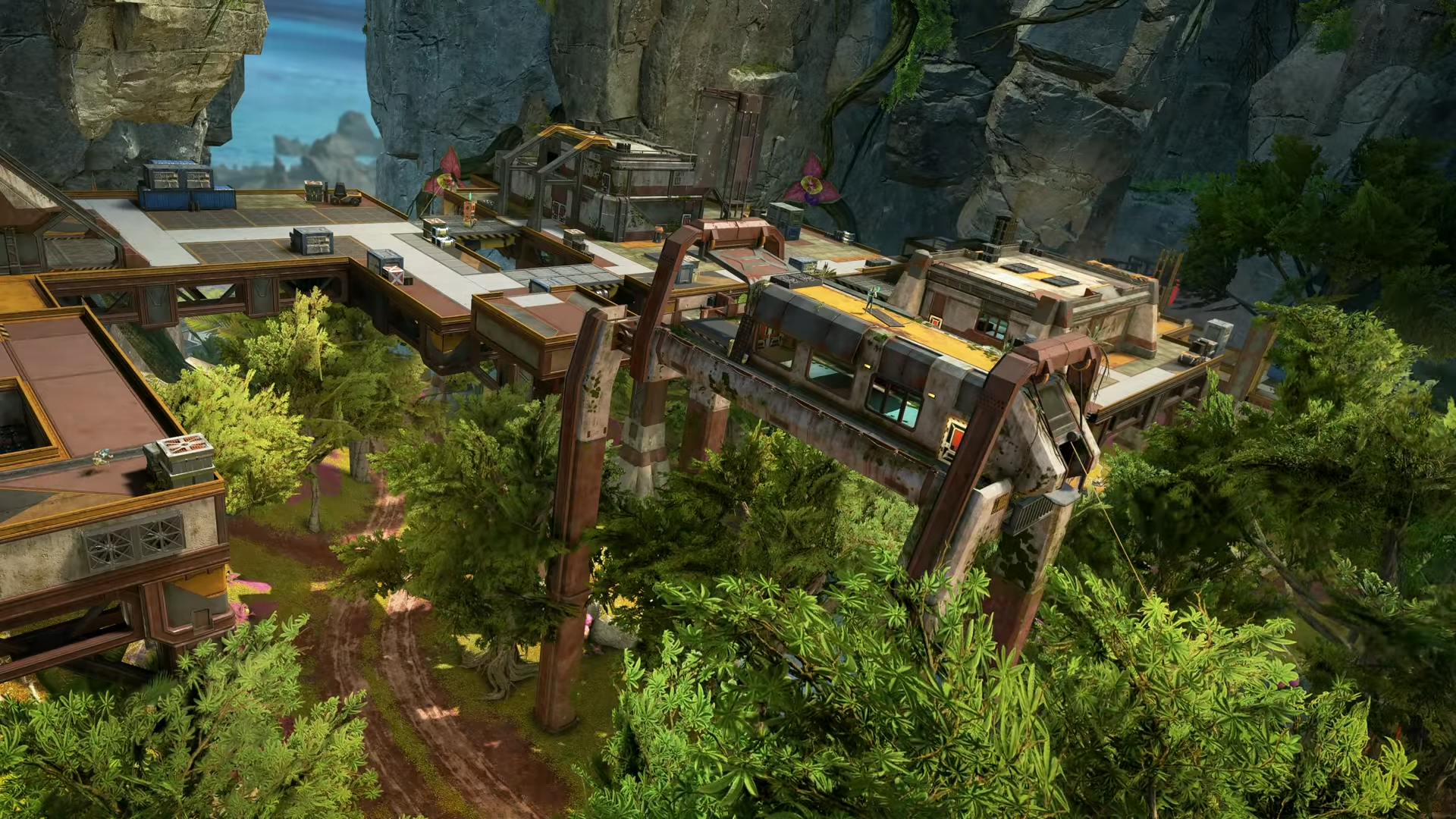 Apex Legends’ fourth map brings a slice of paradise and a lot of trouble to the battle royale.

Storm Point was an old IMC base before becoming the stage for the Outlands’ biggest bloodsport: the Apex Games. The map has 17 marked POIs and a plethora of smaller locations that can house valuable loot or serve as important positions, spread out over an area 15 percent larger than World’s Edge. Of course, like in other maps, knowing the best places to land can give players an edge—or make them roam the map for some time.

It’s easy to get lost between a paradisiac beach and a Prowler nest or three. Here are the best landing spots in Storm Point.

Checkpoint is easily one of the most unique POIs in the new map, but that’s not just what makes it one of the best landing spots in Storm Point. The core of the area is a cluster of elevated platforms that tower over the jungle below. It’s a high-tier loot zone, meaning you’ll find plenty of goodies inside the supply bins and loot in the small buildings on Checkpoint. From here, you can fight in close quarters against any squad also on the platforms, or set up a fortified position on the high ground to try and take out incoming enemies. 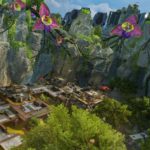 If you don’t get the edge on your enemies, however, you can drop into the jungle to shake off pursuers or try to reposition. The trees can possibly break line of sight, and there are a few ziplines that will take you right to the top of the area. Revenant can also climb all the way to the top if you’re looking to ambush enemies or just misstepped.

The wreck of the IMS Hestia is a POI in Storm Point, and getting location-based voice lines with Bangalore is hardly the only reason to drop there. The structure of the catwalks and supply bins can make Ship Fall feel similar to the Arcadia Supercarrier on Olympus, but combat plays differently there.

Since it’s a wreck, the front and sides of the ship are completely open, exposing players to nearby attackers if there are people around. An interesting part of the Hestia, though, is the zipline connecting the ship’s turbine to the unmarked buildings north of the POI. Players can also enter the Hestia through the turbine when skydiving from the dropship or with a Valkyrie ult.

Players who land in Ship Fall will most likely end up rotating through Barometer to the northwest or Antenna to the northeast. They can also take the unmarked path between Barometer and Antenna if they’re looking to sneak around. Gale Farms on the east isn’t a bad option but leaves players with even fewer places to go depending on the ring location.

Barometer is “the heart of storm point,” according to senior designer Rodney Reece, and it’s easy to see why. Barometer opens up a few ways to play with heights: players can perch up on some of the towers and pick enemies off from afar, stand in the rotating platform in the middle, or try to fight in the basement. The rotating platform houses some good loot, but clever enemies can move up to the rest of the buildings to get a height advantage on any enemies there.

If you’re looking for some loot and opportunities for different engagements, Antenna could be a way to go. This POI is surrounded by catwalks that lead to the buildings and a slew of supply bins on elevated ground, with the rest of the dish lying below.

Players who don’t want to fight on the platforms or are looking to ambush enemies can drop down to the dish itself, making use of the ziplines that connect it to the center of the area and to the nearby houses if they’re looking to reposition quickly.

Antenna may also be an important spot to hold depending on ring position since it can possibly serve as a choke from nearby areas.

Command Center is a large complex inside the rock. Once you get past the blast doors, you’ll spot a wealth of loot scattered throughout the larger areas and the narrow hallways that connect to them.

Combat inside Command Center will hardly be anything but close range, so pack your favorite shotgun or submachine gun and prepare for fights. Defensive legends can shine here because of that proximity, though.

This POI has a good position in Storm Point, close to a series of other POIs and not too far from the center of the map. Landing here will almost guarantee a good fight. If you search around the area, too, you can get to the top of the mountain using some of the longest ziplines in Apex that will make you feel like you’re running up the big ladder in Metal Gear Solid 3: Snake Eater.

Part of what makes Cascade Falls so alluring is its nearly central location on the map, opening up easy rotation spots to the upper part of Storm Point. But that’s not the only reason to go there.

Though Cascade Falls is listed as a mid-tier loot zone, there’s plenty of supply bins on the outside areas and more than enough guns and attachments inside the houses. Pair it with a concentration of houses that provide enough cover and you have the potential for some interesting firefights.

Launch Site is the site of a gargantuan rocket. More importantly, though, it’s also home to an arsenal of high-tier loot, making it an excellent drop spot. The structure itself can be hard to navigate, with several walkways and different levels, but landing here will likely pay off.

As far as rotations go, players can move into Antenna, head to the middle of the map, or move towards Storm Catcher and the northernmost part of Storm Point. Its location can weigh against Launch Site a bit depending on the ring logic, but this POI will more often than not be a good place to land.

These areas likely won’t have as many players dropping onto them, but they can still be good landing spots for players who aren’t keen on dropping hot.

One of Cenote Cave’s disadvantages is its position on the map. Depending on the ring position, players will have to walk for some time before they see any action, and the nearby Mill is also a small and fairly abandoned POI. Luckily for players who land there, though, there are two Tridents near Cenote Cave and another one outside of The Mill, which provide quick ways to traverse the map. 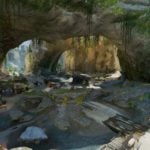 Players who want to walk on foot can take the eastward tunnel crossing the rock, which makes for a path towards Barometer, or go the long way towards The Mill or Checkpoint.

Depending on the location of the ring, Cenote Cave can gain strategic importance. It can be “a critical path between the Barometer and the entire western half of the island,” Respawn said in the blog post.

North Pad is a fairly remote location on the northern side of the map. Loot won’t be much of an issue here considering the wealth of supply bins and floor drops. North Pad also has the advantage of being an arrow’s shot away from Checkpoint, especially if players take the zipline that stands conveniently at the end of this area. Players can also take one of two Tridents near this area to traverse longer distances.

These two POIs have more than enough loot to arm a few squads, and landing there can give you a good amount of loot to get started. Though the two POIs can seem far from each other, a handy Gravity Cannon between the two makes going to and from them a matter of seconds. This means a squad can easily get in, loot both POIs, and head back through the Gravity Cannons.

Fighting in Storm Catcher or Thunder Watch will likely be in close range. A lower level on each POI touches on the Gaean jungle, and players can easily drop down or go up from the connecting ziplines. Taking the high ground offers a fortified position in important areas of the map, but keep an eye out for invaders.

Both Storm Catcher and Thunder Watch sit in valuable locations on the map, especially if the ring favors them. If they’re too far from the ring, however, players can just take the nearby Gravity Cannons to speed into the rest of the area—or make a quick getaway if needed.

These spots are for when you really don’t want to be disturbed when playing. Fish Farm is a quiet location far into the southeast of Storm Point, and it makes up for the lack of action with heaps of loot. There are several supply bins scattered around the area, and the individual houses also carry their share of gear, attachments, and weapons.

After you’re done arming yourself, you can head on foot to the nearby Ship Fall or Antenna, or take the Trident near Gale Station to rotate out of the area entirely. Fish Farm is a secluded location on a large map, but landing there can pay off if you’re not looking for immediate action. Besides, by the time you’re done looting, odds are you can face off against a squad at Ship Fall or Antenna anyway.