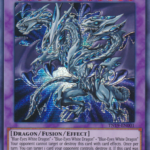 Dragon cards in Yu-Gi-Oh! are notorious for being quite difficult to summon while bringing a lot of powerful abilities to the board.

There are various ways to incorporate them into your decks, with a Dragon Link deck currently dominating the meta. Gabriel Netz used the deck and placed first in the recent LCS X February 2021 tournament, using the power of Dragons to overwhelm his opponents.

Here are the best five Dragon cards in Yu-Gi-Oh!.

The Noctovision Dragon is a great counter card against your opponent’s attempts to target face-down cards you control. You can banish it from the graveyard to negate the effect and stop your opponent from targeting your face-down cards until the rest of the turn. On top of its powerful defensive effect, you can Special Summon it on the field or use it as a Link Material, while also drawing a card.

Slifer the Sky Dragon requires three tributes to summon, which cannot be negated. After being summoned, no card or effects can be activated to stop him. It gains 1,000 ATK/DEF for each card in your hand, making it a powerful and strong creature on the board if you have a wide hand.

The Winged Dragon of Ra is similar to other Dragons, requiring three Tributes to summon. His summoning cannot be countered, ensuring you’ll be able to get him on board. He has flexible ATK and DEF depending on how much LP you are able to pay. You can reduce your points down to 100 to ensure you get the maximum amount of stats on board, as long as you’re sure your opponent doesn’t have a way to deliver the killing blow.

The Five-Headed Dragon is one of the most powerful Dragon creatures from the list, requiring a Fusion Summon of five Dragon monsters. But its effect that stops it from being destroyed in battle by Dark, Earth, Water, Fire, or Wind monsters makes it a huge threat on board. It can win you the game next turn if the opponent doesn’t have a spell to counter it.