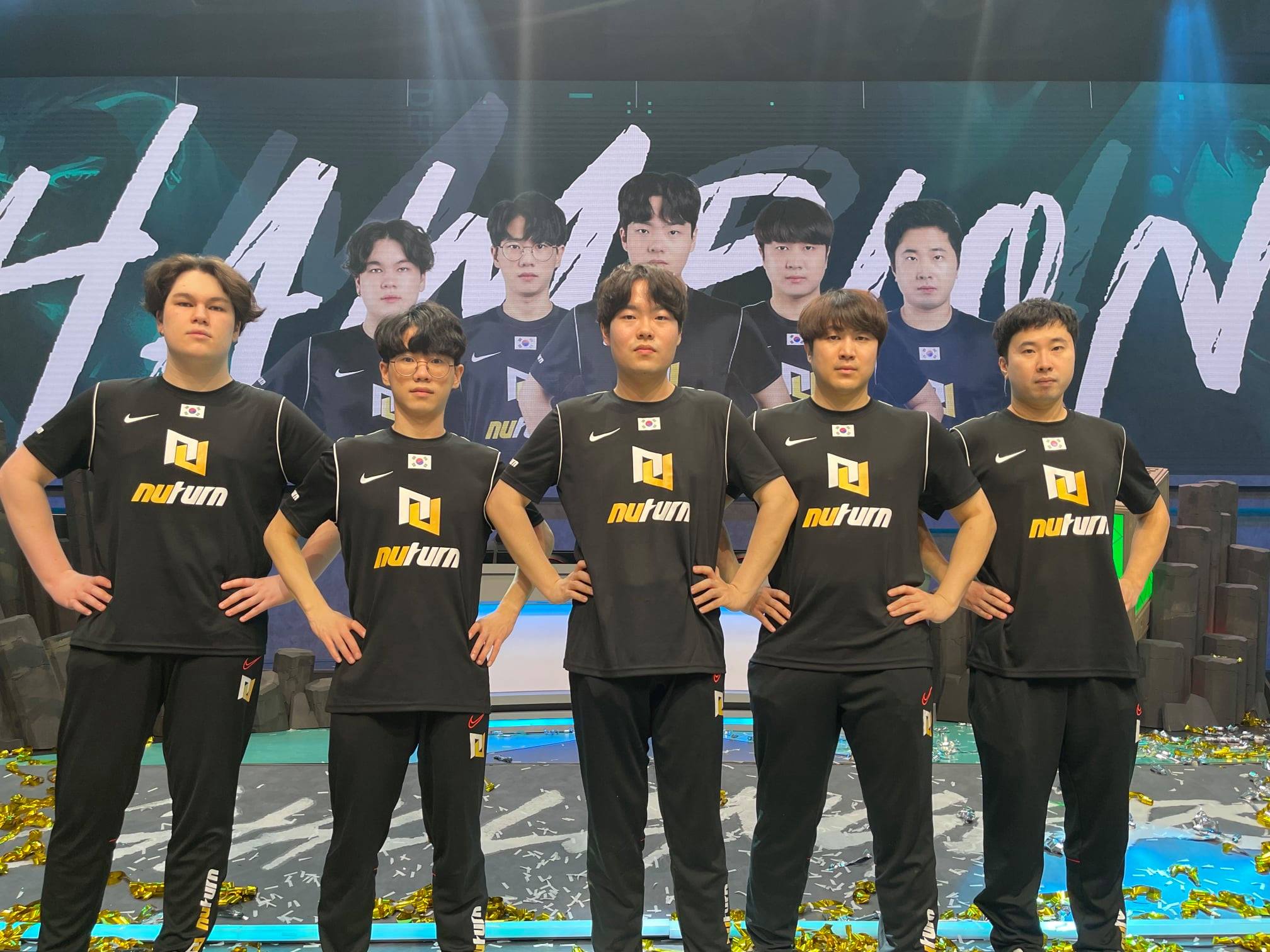 When Vision Strikers fell for the first time in the group stage of the Korea Challengers Final to F4Q, a legendary streak came to a close. The team of Counter-Strike veterans had played 102 consecutive series without a loss until that match, but they weren’t out of the running for Iceland just yet. They rallied with wins over inG then TNL Esports, putting them in the semifinals.

But there, lightning struck a second time. NUTURN Gaming delivered a stunning win over the kings of Korea 2-0 to move on to the grand finals, where they defeated DAMWON to book their ticket to VCT Masters Reykjavík.

NUTURN may not have been the first to defeat Vision Strikers, but they are the first to win with a 2-0 and the first to eliminate them from a tournament. Their victory was more impactful in the grand scheme of the rising VALORANT region that is Korea, and now they’re looking to to prove to a global audience they are no pretenders to the throne.

How a dynasty falls

From the beginning of the series, NUTURN looked more than capable of answering the call against Vision Strikers. In the first half, NUTURN were re-taking sites back from Vision Strikers with ease. They showed no fear in round three, sending all three players into an opposing Lockdown and getting the kill on the remaining Killjoy and destroying her ultimate device with fractions of a second left.

Throughout map one on Ascent, Vision Strikers would routinely let NUTURN back into rounds they had no business winning, allowing them to steal rounds away or at the very least, hurt Vision Strikers’ economy. On the contrary, NUTURN would rarely squander rounds and opportunities where they took early advantage. They wisely used utility to force one-ways, clear hiding spots to secure ultimate orbs, and drastically slow down post-plants.

On Bind, it looked like NUTURN had found a copy of Vision Strikers’ playbook ahead of time. They started on defense and would routinely play far up B Long and mid, knowing Vision Strikers liked to play slow out of Short A. This let them pinch the attackers as they went to take sites. NUTURN took a 5-0 lead to start, and any rounds Vision Strikers won were typically costly in terms of player deaths and ultimates spent. NUTURN took second half pistol and never looked back, playing fast and wisely spending most of their utility post-plant, forcing Vision Strikers to take less-than-ideal duels. While some can argue Vision Strikers’ missed shots led to a map one loss, there was no doubt they were outplayed on Bind.

With Vision Strikers defeated, NUTURN could move on to DAMWON in the grand finals. DAMWON got off to an early 6-0 lead on Bind via surprise picks of both Yoru and Sage, but it was more fine utility play from NUTURN that got them back into the game. On their defensive side, they slowed down DAMWON’s pushes so much that the attacking side frequently had to plant under duress, putting them at a disadvantage for post-plants. NUTURN took Bind 13-10.

Split was an absolute defensive showcase for NUTURN, who punished DAMWON for not picking an agent who could flash in. Past the first two rounds, NUTURN only allowed three spike plants, defused all thee, and led 9-3 at the half. But DAMWON would show up on defense as well, closing the gap to bring the score to 12-11 in favor of NUTURN heading into the last round of regulation. Despite only having Spectres and a single Ares, they used Killjoy’s ult to clear B site then Breach’s ult to dismantle the re-take, and escaped Split 13-11 to take a 2-0 series lead.

Map three, Ascent, was much more of a back-and-forth affair throughout the entire map. Once again, it came down to the final round of regulation, with NUTURN again leading 12-11 while on the defensive side. NUTURN’s veteran leader, long-time CS pro Kang “solo” Keun-chul, secured the triple while tucked in the corner of the B site to end another close map and finish off the series.

A tall task in Iceland

Despite NUTURN’s impressive run at the Korea Challengers Finals, where they didn’t drop a single map in either group stage or playoffs, much of the world’s focus was on Vision Strikers’ absence instead of NUTURN’s triumph. When asked about the other regions after their win in the NA Challengers Finals, Sentinels’ Shahzeb “ShahZaM” Khan said he was disappointed they wouldn’t get a chance to play Vision Strikers. With the undefeated team both defeated and gone, much of the focus has reverted back to North America vs. Europe.

No longer represented by an undefeated titan, Korea won’t enter VCT Masters Reykjavík with a target on its back, but now is perhaps being slept on. And if their run at the Korea Challengers Finals is any indication, NUTURN should not be taken lightly.

They’ve shown they know how to do their homework, with tailored gameplans against both Vision Strikers and DAMWON. They use utility and abilities wisely on attack and defense, they can win rounds they should’ve lost or at least make them costly, and right now, they’re on a hot streak.

NUTURN can’t be considered favorites, simply because they lack the extensive CS:GO experience other teams have, even if their leader has a lengthy background himself. Many of the mistakes teams like DAMWON and Vision Strikers made will probably not be made by squads like Sentinels, Team Liquid, and Fnatic. But the biggest mistake those teams can make is to not take NUTURN seriously. That’s all the king slayers of Korea need to take the crown for themselves.