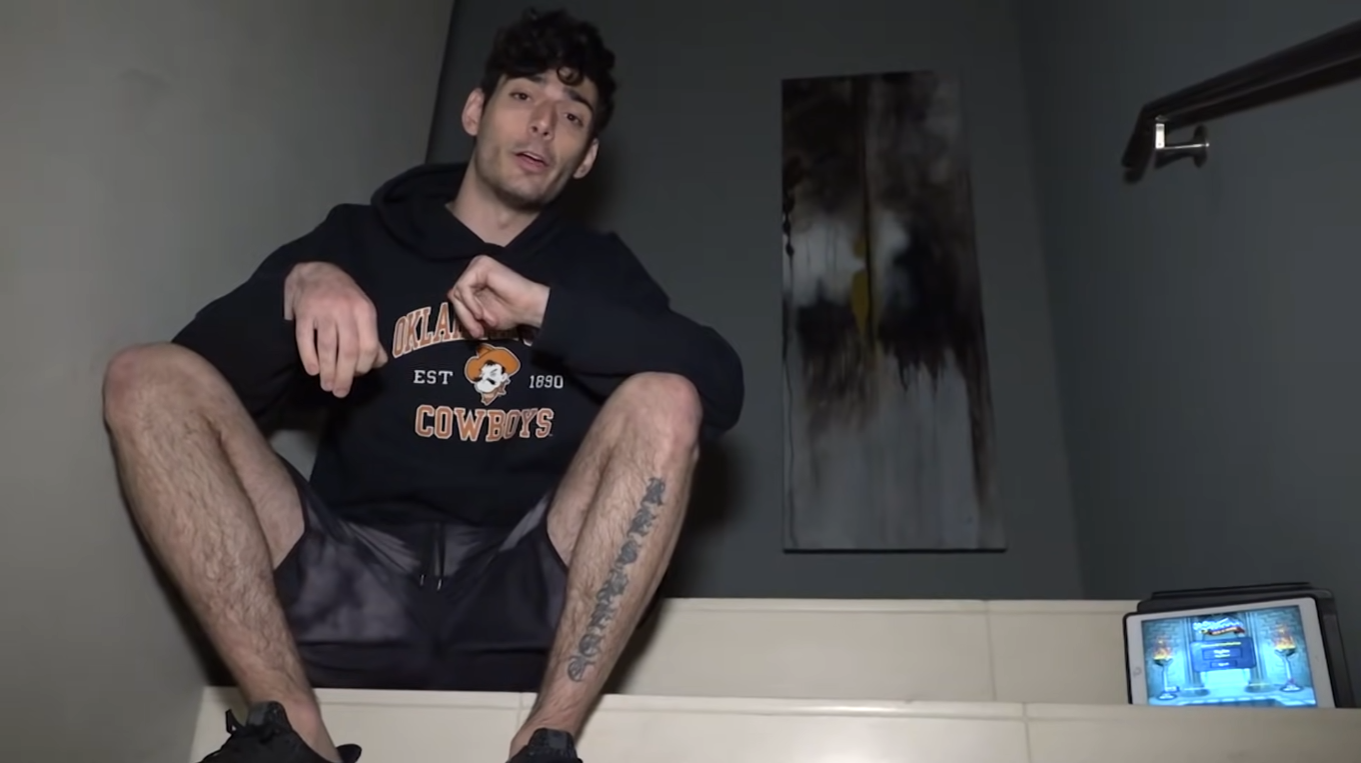 On April 28, 2017, popular streamer Paul “Ice Poseidon” Denino had just touched down in Phoenix, Arizona on his flight from Los Angeles when the plane was surrounded by police. They promptly boarded and removed the streamer from his seat.

Unbeknownst to the streamer, a bomb threat had been called in detailing him as the perpetrator. The caller had gained Ice’s flight information after he shared his terminal number during a broadcast before boarding his flight. Although the police confirmed the threat wasn’t credible, the damage had still been done. Ice would later be permanently banned on Twitch.

In the wake of this incident, Ice was forced to look elsewhere to find a home for his content and community, eventually starting a new chapter on YouTube that would come with its own unique challenges.

Ice’s community had been built on edgy humor and questionable behavior. The bomb threat incident was rock bottom for both Ice and his community, and while things didn’t immediately change, this incident was a turning point that would inspire long-term growth in his relationship with his community. Now, four years later, after moving from one streaming service to another, Ice is in search of just one thing: redemption on Twitch.

During his time on Twitch, Ice pioneered the IRL category, initially using Pokémon Go as a loophole to bypass the streaming platform’s previous ban on non-gaming content.

Ice’s audience grew quickly as he spearheaded the IRL movement. Thousands of fans flocked to his stream eager to see what would unfold when the streamer interacted with the outside world. But this also bought a dark trend of swatting and doxing.

Following his ban on Twitch and his move to YouTube in 2017, these toxic elements within Ice Poseidon’s community festered, causing more harassment problems for many of the people connected to the stream—including Ice himself.

One of the catalysts for his community reaching this point was the r/Ice_Poseidon subreddit, where thousands of Ice’s viewers would gather to discuss the stream. Others used the forum as a place to share racist and offensive material.

“You know when you have a Reddit, essentially entitled viewers can upvote other entitled viewers and create a really toxic environment which translates to my chat room and it’s not a fun time,” Ice said in an interview with Dot Esports. “I don’t know maybe it’s just me because I didn’t moderate it enough, but I mean if you give people the opportunity to say negative things it just starts to spiral out of control—it’s unfortunate. You can’t give viewers the opportunity to criticize you in a forum like Reddit because they start to get out of hand with it and they don’t know where the line is and then you lose control.”

Ice’s biggest issue came in the form of swatters and callers, a broad term used for viewers who would use Ice’s location to call nearby businesses in an attempt to harass the streamer. While these incidents were often highlighted on the forum, Ice doesn’t believe his subreddit was to blame.

“Listen, that stuff was very very bad, but I don’t think it was Reddit’s fault,” Ice said. “That happened because if you’re walking in public with 20,000 viewers, I mean you’re just putting too much power into your viewers essentially right? I don’t know, walking into a store with 20K viewers, walking down the street with 20K viewers. It’s just very likely something weird is gonna happen because, you know, you have viewers that want attention and they want something weird to happen.”

The toxicity eventually caused Reddit to ban the forum in October 2019. At that time, Ice abandoned the platform entirely.

With no plans to reopen his Reddit, Ice moved to Discord to communicate with his viewers. While using this new platform, Ice said much of the harassment he had been facing had dissipated. It’s also given him a way to connect with his audience on a more personal level where he’s treated like a person rather than an object.

Since cleaning up his community, Ice has adopted a new approach to dealing with the calling and other attempts at similar forms of harassment when they arise on stream.

He now simply ignores them, turning the stream off at the first sign of trouble, and moves on. Using this approach, Ice says these situations have mostly stopped.

Early in 2019, shortly before his move to Mixer, Ice made massive changes to all aspects of his stream, including expanding his style of content, and addressed the toxicity within his community.

“I was already beginning to change my content up when I moved out of L.A. because I just was like ‘hmmm, I’m not really happy doing this anymore,’” Ice said. “You know I had a very bad sorta community at that moment, very toxic and all super against me and I was just like alright I’ve gotta just take a step back and restart because I’ve let things get out of hand.”

Microsoft closed its flagship streaming service Mixer last summer, which forced its creators to find a new home for their content. This closure left Ice in a position he had been in before, one where he was forced to seek a new home for his stream.

Without an answer regarding a potential return to Twitch, Ice moved his stream back to YouTube in June 2020.

“It was kind of weird—I really didn’t want to do it,” Ice said. “I enjoyed Mixer, it was a pretty good platform. It was just unfortunate that they didn’t know what they were doing in my opinion. They had a very disconnected vision to what their creators actually wanted.”

Despite this, Ice still feels as though Mixer had some vision for its creators, which YouTube currently lacks, according to the streamer.

For streamers like Ice, YouTube offers a variety of challenges ranging from its vast library of daily short-form video content to a lack of basic features.

“Discoverability is bad, and you have to constantly grind to get in the algorithm and get recommended and it’s just very difficult to do that as a streamer,” Ice said. “If YouTube wants to just do anything, like if they could just add a better chat room where, like everyone has badges and more intrinsic sort of options to customize who they are in the chat. That would be a great first start to building a healthy community, because right now YouTube chat is just spam.”

Following the shutting down of Mixer, Ice released a video and accompanying statement urging Twitch to reassess the ban placed on his account in 2017.

For Ice, a streamer who grew to fame on the platform, a return to Twitch is more than just a new site to house his stream. It would also be a way to reunite with old friends.

“I mean I’d love to collab with literally any other streamer without some weird stipulations,” Ice said. “And then also Twitch is obviously a better streaming platform than YouTube, so I’d like to go on there and be a part of it. It’s unfortunate though, the main thing is not being able to collaborate with other people. It’s very difficult, it’s very annoying, and it’s very depressing to be honest with you.”

Ice has yet to hear back from Twitch regarding his appeal. But the feedback from his peers has been positive.

“I don’t know if the Twitch staff liked it, but my friends liked it and they gave me some positive responses,” Ice said. “I have no idea what Twitch thinks about it and I don’t know if they saw it. I’m just going based on what people told me but I’m pretty certain they did.”

Almost four years after the plane incident, a lot has changed for the streamer, and he’s put in work to make amends for his actions and reshape his community to better suit a return to Twitch. But it remains to be seen if the platform will decide to take the streamer back in.

Dot Esports reached out to Twitch regarding Ice Poseidon’s ban appeal, but the company did not respond.