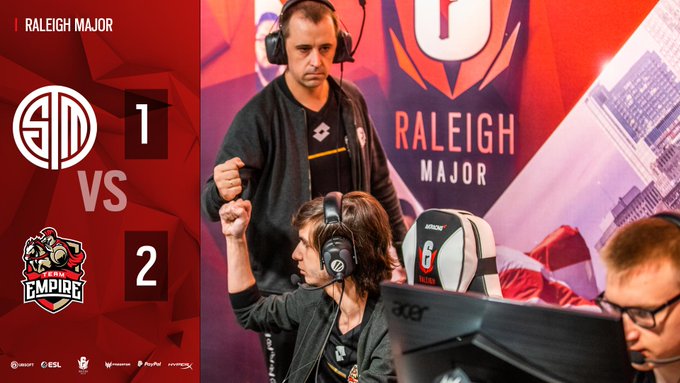 TSM may have lost 2-1 to Team Empire in the first best-of-three of the Six Major Raleigh today, but they proved that the hype surrounding them is warranted. They’ve had a notoriously rough Pro League season but TSM continue to surprise in a LAN environment.

The seventh-ranked North American team stood tall on Kafe against the season nine Pro League champs, Team Empire. TSM narrowly controlled the map 7-5 in a truly impressive display. Taking even just one round off of the “Russian Giant” is no small feat, especially when Pro League stats would dictate the match should have gone another way.

Expectations for what TSM are capable of have always been high, but the squad really lives up to all the hype in a LAN setting. Even with some players underperforming, TSM look a lot more cohesive, especially when it came to clutching up on Kafe. Khalil “b1ologic” Pleasis found an important clutch in round five while attacking Kitchen. This built the foundation for the momentum that carried TSM to the map win.

While ClubHouse didn’t play out in TSM’s favor, the squad put some rounds on the board before being forced on to map three. The shift to Border looked a bit more promising when watching Bryan “Merc” Wrzek narrowly lose a one-vs-five situation. But the near-legendary clutch was cut short when Merc failed to see the last Empire player’s foot around the corner. The failed clutch seemingly served as the inverse of b1ologic’s clutch on Kafe, signaling the downfall of TSM on Border.

Even though Empire ran through TSM on both Border and ClubHouse, this best-of-three was a solid show of what TSM are capable of in terms of high-level gameplay. While TSM have been underperforming in the Pro League, they’ve shown that they can hang with the best of the best on LAN.

TSM aren’t out of the race just yet and will have a chance to stay in the tournament in a decider match against the loser of the NORA-Rengo vs. MIBR match. Fans can catch the official stream throughout the week here, while the Bravo broadcast can be found here.