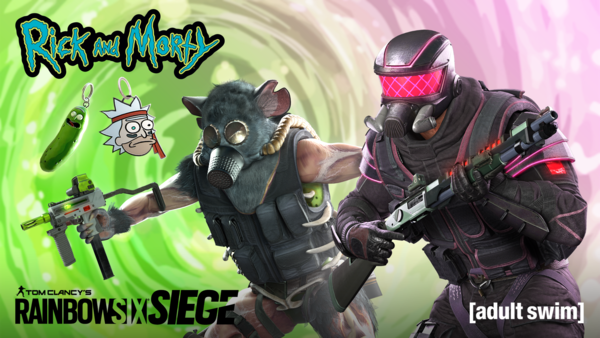 Ubisoft and Adult Swim have teamed up, and soon, you too can be a pickle whenever you play Tom Clancy’s Rainbow Six Siege.

Ubisoft is dropping two cosmetic bundles with a Rick and Morty theme tomorrow to commemorate the Galactic Federation’s Gromflomite military personnel and the infamous “Pickle Rick” episode from season three.

Each bundle will cost 2,160 R6 credits. Ubisoft said in an announcement today that more bundles like this will come out throughout this year.

The Sledge Gromflomite bundle will include a player outfit that’s perfectly identical to a Galactic Federation soldier.

A Sledge M590A1 weapon cosmetic in the bundle includes a piece of tape that reads “Fake Gun Shoot Me In Standoff.” The reference is a callback to season three, episode one of Rick and Morty when Rick uses the “Oldest Rick trick in the book” to save Morty and his sister, Summer.

The bundle also comes with a Seal Team Rick charm.

In the episode, Rick famously turned himself into a pickle in an attempt to avoid going to family therapy. After being flushed into the sewers because he had no arms or legs, Rick had to use his cunning to survive almost certain death.