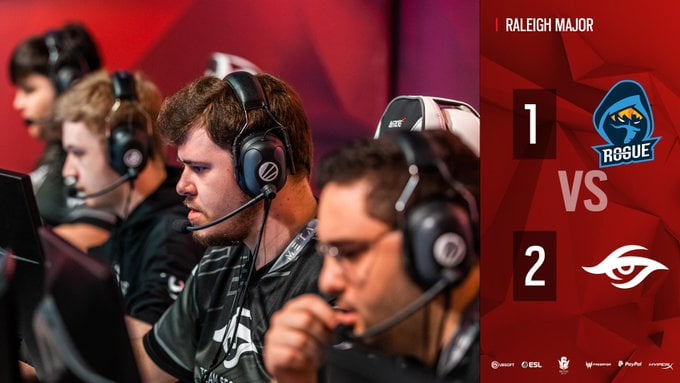 Team Secret are one of the most curious teams in the Rainbow Six esports scene. They were relegated back to Challenger at the close of season nine but conquered the Vegas Minor after the fact. After a 2-1 win over Rogue today, it looks like Secret have their eyes set on the Six Major Raleigh.

It seemed like Secret vs. 2018’s Team USA would be a one-sided matchup. Rogue have looked more like their dangerous selves lately and posed a huge threat to Secret heading into the first matchup for the Six Major Raleigh. The current form of Secret is unrecognizable to their season nine performance. Fans are seeing Secret roll out heavy frags and reliably strong holds against some of the best teams in the world.

Taking ClubHouse off of Rogue at 6-4 was impressive, and while it was a close scoreline, Secret looked dangerous right off the bat. That momentum was carried through to the second map of the day, but only to a point. While Rogue stumbled in the first half of Bank, Secret slipped up in a massive way. Secret earned a two-round lead but let it fall away as quickly as it came. Rogue pushed the game into overtime to take Bank off of Secret.

Even after the massive comeback by Rogue, Secret continued to show up their season nine form. Matthew “meepeY” Sharples pulled out all the stops in round eight to clutch up a one-vs-three situation on the third and final map. This clutch is what dreams are made of in this esport. Smart utility use, even if ineffective, definitely contributed to meepeY’s success, but there’s no substitute for brains and aim.

So far in Raleigh, Secret look as strong as they did in the Vegas Minor. There’s a lot of potential on the Secret roster and they’ve learned how to best use each one of their players’ strong suits. Secret continue to look dangerous and could be one of the top teams to watch in the Six Major Raleigh.

Fans can catch the official broadcast here to see how Secret hold up against the tough road ahead. The Bravo broadcast for the Six Major Raleigh can also be found here.