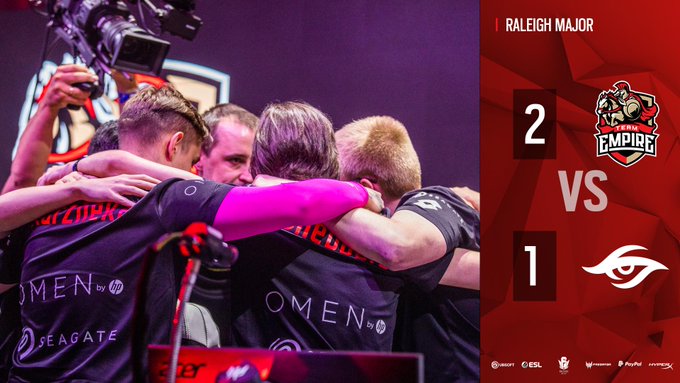 It’s been an impressive run for Secret after the team was relegated to the Challenger League. Most teams go through massive roster changes or disband, but Secret have actually grown stronger since relegation. Unfortunately, Secret was unable to keep pace with Empire in today’s best-of-three meeting.

While it’s impressive to see Secret win their gunfights on Coastline against Empire, the map win only prolonged the inevitable. The loss doesn’t come as a shock but it will certainly sting for the underdog supporters.

Empire played just about as fans would expect, except for Danila “dan” Dontsov. The newest member of Empire dominated Secret at almost every turn. As long as dan was up, Secret was in for a bruising.  Dmitry “Scyther” Semenov’s “big brain” defuse on Bank only added fuel to his teamate’s fire throughout the best-of-three.

Secret may be done at Raleigh, but Empire will still have to face what could result in their toughest matchup. Whoever comes out on top of the G2 Esports vs. forZe match will pose a giant obstacle for Empire. The grand final is a best-of-five with unlimited overtime so it’s going to be grueling regardless of which teams make it through.

The Raleigh has almost run its course, but the most explosive matchup has yet to come. The last semifinal is still to come in addition to a full Operation Ember Rise reveal ahead of the grand final. Fans can catch the official broadcast here.