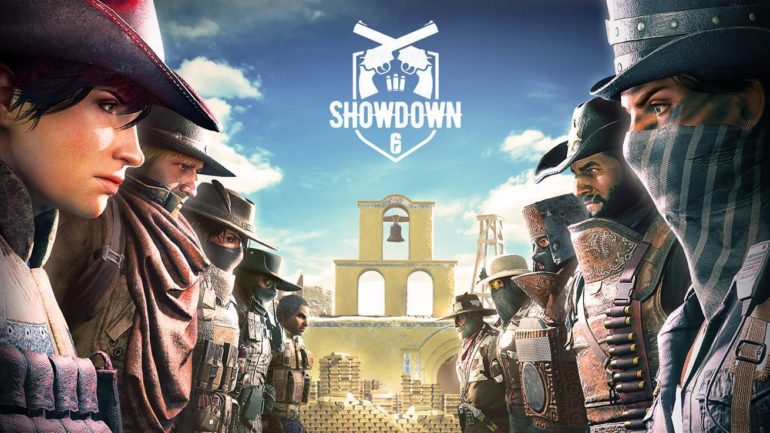 The newest mid-season event to hit Rainbow Six Siege is a Western-themed one tap festival called Showdown. While the event is a bit less whimsical than the Rainbow is Magic event, it still provides a fun distraction from the issues that have spoiled Operation Phantom Sight.

Showdown is a new game mode that pits three of the Graveltop Gang against three members of The Law on a small but new map called Fort Truth. The mode features a limited character roster, similar in fashion to Rainbow is Magic and Operation Outbreak. The kicker here is that the game mode revolves almost solely around one taps, which is when players end their opponents with one bullet.

Anyone who’s played Siege understands that they’re one peek away from being one tapped at any given moment. Showdown takes this concept to the next level by only arming players with the dreaded BOSG. 12.2 slug shotgun and the legendary Magnum LFP586. Both weapons can be difficult for beginners since there’s no “shooting range” type of area for players to become acclimated with high-skill weapons like the Magnum and BOSG. Players are forced to use these high-skill weapons, which takes the pressure off of anyone who never got a chance to get comfortable with the god-tier guns.

Showdown is definitely more of a departure from regular Siege gameplay than Rainbow is Magic was in April. Although the Plane map in Rainbow is Magic had drastic changes to it and the hostage in Hostage mode was a giant teddy bear, the core gameplay remained intact because of the familiarity of the map and mode. In Showdown, fans are dropped into the open and expected to duke it out on a brand-new map. While there’s a Secure Area mode at play, it rarely ever gets that far. Most of the time you’ll have either one-tapped the enemy team to death in 30 seconds, or vice versa. There’s also no reticle, health ring, or ammo count.

In our time playing Showdown, we realized a couple of things. The first major revelation was that we were having straight-up fun without feeling the usual competitive spirit that accompanies Siege. While there’s no escaping the winner-loser dynamic, it felt just as fun to get swept 3-0 as it did to sweep 3-0. The second aspect of Showdown that stuck out was just how addictive it was to play. Part of the fun of playing with the BOSG. is the risk-reward dynamic it has due to it only having to rounds chambered. Getting the one tap on an enemy was as rewarding as ever and missing those two shots made for endlessly-funny retreats and panic melees. The frantic mechanics made us want to jump right back in and give it another go.

The bottom line is that while some fans may argue that “the devs should just fix the main game,” it’s actually important to have game modes like Showdown. These mid-season events help grow the player base and also give longtime fans a way to blow off steam in the middle of an otherwise underwhelming season of play that’s been riddled with bugs and DDoS issues. Aside from the Kafe rework, there hasn’t been too much to write home about in Operation Phantom Sight, and having a mode like Showdown helps to re-engage and grow the player base.

The Showdown mid-season event is live now and will continue through July 16. Players have the option to purchase premium event packs that feature cosmetic items for multiple operators, but they can also earn a couple through in-game challenges.