Fun and games in the final matchday of the NA division 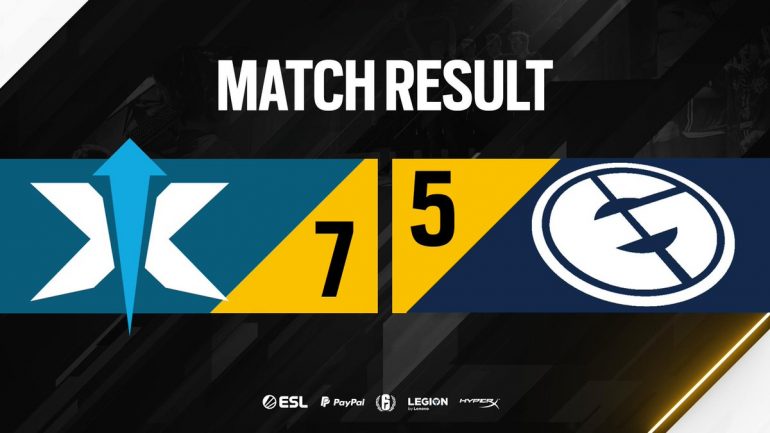 The regular season of R6 Pro League has come to a close for the NA division. With the standings all but set in stone, two teams looked to stay out of auto-relegation. Excelerate Gaming and Rise Nation fought to stay away from the relegation spot, but only one of them could succeed in doing so.

Evil Geniuses had a seemingly easy matchup against the sixth-ranked Excelerate Gaming. The teams faced off on Coastline with Capitao and Valykrie banned from play. Evil Geniuses had already secured their finals spot and didn’t ban any operators. EXG needed the win to guarantee their safety in the case that Rise Nation found a victory against DarkZero Esports.

Evil Geniuses clearly didn’t take this matchup seriously. From not banning operators, to running an overly-aggressive defense, Evil Geniuses played recklessly. EXG, on the other hand, was playing the match full-speed. Still, Evil Geniuses grabbed the early lead at 2-1.

Emilio “geo” Cuevas punished EXG’s separation from each other by denying the plant with a C4 and getting the kill on Owen “Pojoman” Mitura in the last second of a round. Tommy “Krusher” Samuel took down Troy “Canadian” Jaroslawski to stop Evil Geniuses’ four-round win streak to bring the match to 4-2 at the half.

Evil Geniuses fell apart a bit after halftime, but that’s expected when teams play aggressively. EXG brought the match back to 4-4. Matthew “Achieved” Solomon threw down a 4K in round 11 to bring the match to 6-5, now in EXG’s favor. Evil Geniuses dropped the match completely, giving EXG the victory needed to make sure Rise Nation stays in the relegation spot. The match closed at 7-5.

Rise Nation took on DarkZero Esports on Villa with Pulse and Nomad banned out of match. For DarkZero, this would merely serve as a victory lap to close out the regular season. Conversely, Rise competed knowing they were headed to relegation against the second-best Challenger League team. Rise decided not to make any bans, but DZ opted to follow tradition and ban operators despite being the top team in the NA division.

DZ answered Rise’s round one win with a bloodbath of a round two. Apostolos “Hyper” Kontopanagiotis tried to secure some cheeky peeks but failed to make anything stick in the early rounds. Terrell “England” Lee found a great Cav interrogation in round three to give Rise their second-round win and a little momentum to go along with the win.

England and Joshua “Vandal” Diaz had a dynamite round five to carry the match 4-1, Rise. Zachary “Nyx” Thomas racked up a 3K in round six to help bring the round to a one-vs-one with Brandon “BC” Carr, which he would come out on top of for DZ. Rise let DZ push the match to 4-4 after the side-switch. Samuel Jarvis picked up two massively important kills in round nine with a Lesion hatch play, extending DZ’s lead to 5-4.

DZ brought the series to match point at 6-4. Rise held off DZ in round 11 with a sneaky defuser plant and some time-wasting strats, causing BC to miss out on the defuse after securing the site. Kyle “Mint” Lander locked in the win for DZ with a Clash one-vs-one clutch and defuse. DZ closed out the match at 7-5.

Spacestation Gaming and Team Reciprocity closed out the NA division’s final matchday of the regular season on Villa. Jackal, Dokkaebi, Echo, and Lesion were banned out. Broadcaster Parker “Interro” Mackay noted that this is possibly the first Lesion ban the NA division had seen all season.

Rec ran round one in a chaotic show of force. Despite having an early man disadvantage, Rec controlled the round with fast-paced frags. SSG ran the clock to take round two after a frag-for-frag round of play. Gabriel “LaXInG” Mirelez and Alex “Skys” Magor contributed heavily to an early lead of 3-1 in Rec’s favor. Rec continued to perform in solid form, furthering their lead to 4-1 after a plant and a roster clean up.

Skys dominated the SSG roster in round six before switching sides. For a map that is heavily defender-favored, Rec controlled the match while attacking. SSG came alive on their first attack round when they promptly cut down LaXInG in the opening seconds of the match. Dylan Bosco took down some important bodies early on to whittle down Rec to a lone player and secure a win for SSG.

LaXInG brought the series down to match point at 6-2. The final matchday for the NA division was a strange one and it only got stranger when LaXInG brought Tachanka into the match with his Rainbow is Magic unicorn skin. Rec wrapped up the match at 7-2.

Overall, it was a strange end to the regular season of play for the NA division. Entertainment was the main focus of the day with Evil Geniuses and Team Reciprocity giving fans an off-beat show, while DarkZero and Rise gave fans a highly-competitive match. Pro League picks up Wednesday, April 24. Fans can catch the official broadcast here.