NiP’s reign continues on through the halfway point of season 10. 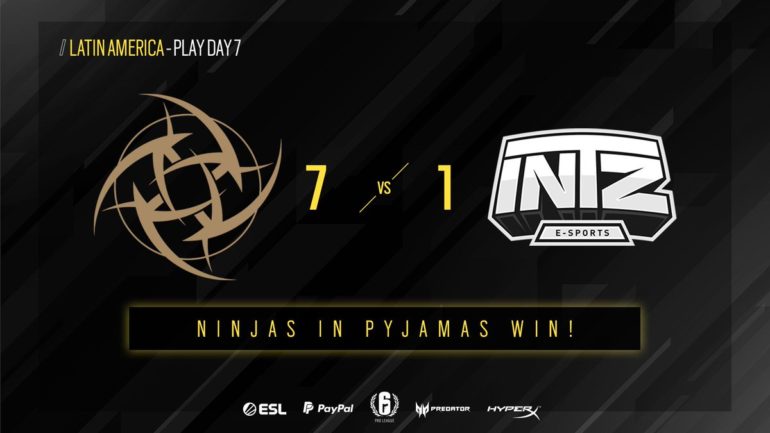 The final matchday of the first half of the Rainbow Six Pro League kicked off with INTZ taking on NiP in a pivotal matchup for the Latin American division. With a midseason hiatus approaching, NiP needed to lockout third-ranked INTZ to solidify their top-ranked status.

INTZ had an encouraging start on the attack, but NiP quickly flipped the script. NiP’s Lockers defense went just about as poorly as possible and the same could be said for INTZ’s second round on the attack. Both rounds saw one player left up in the clutch with the opposition closing in aggressively. NiP predictably was the first to string multiple rounds together to create momentum.

For as broken as Clash has been during Operation Phantom Sight, the operator really lends herself to locking down the stairs down to Server. Without entry through Server, attackers tend to stall out and end up hanging themselves on the clock—which is what happened to INTZ in round three.

INTZ continued to miscalculate on the attack with a slower pace and questionable late-round rotations. Time was consistently working against INTZ due to the squad’s inability to gain early-round map control. Even with a man advantage, INTZ failed to get through the stairs to Server and time yet again prevailed. NiP was essentially gifted several defensive rounds to lead 5-1 at the half.

Seeing the two LATAM squads go toe-to-toe highlighted why NiP is sat atop the division and why INTZ will continue to play catch up in the second half of season 10. Even after fending off NiP until the dying seconds of round seven, Julio Giacomelli was too much for INTZ to handle. Julio shut down INTZ’s site retake with 4K to take match point at 6-1.

INTZ failed to capitalize on NiP’s mistakes in round eight and effectively shot themselves in the foot. NiP took the win with a whopping 7-1 to remind INTZ who is the top-ranked team of the LATAM division. Today’s win earns NiP a strong grip on the LATAM division with 19 points in just the first half of season 10 alone. Now, NiP will have little to contend with if FaZe drop their matchup with Immortals. For now, it looks like the LATAM standings are locked into place until the regular season returns from hiatus.

The LATAM division of the Rainbow Six  Pro League returns from hiatus on Wednesday, September 18. Fans can catch the official broadcast here.