NiP accomplish what FaZe could not in matchday six. 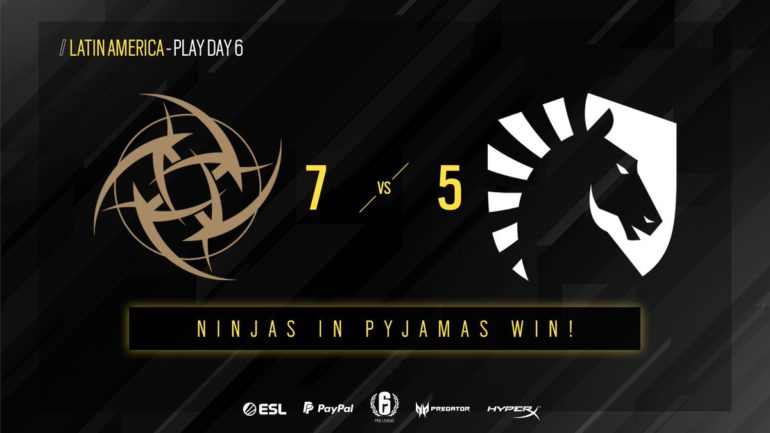 With the top of the Rainbow Six Pro League Latin American division tightly bunched, NiP had everything to lose in their matchday six standoff with Team Liquid. Conversely, Liquid had everything to gain after INTZ failed to secure a win over FaZe Clan.

Three rounds passed quickly, with NiP and Liquid jockeying for solid control of the game early. NiP grabbed a second round win by simply playing for time in the dying seconds. Luccas “Paluh” Molina clutched up in round two to help keep things even keel from the jump. Paluh found another impressive run in round five.

Thanks to Paluh’s round five 4K, Liquid took a 3-2 lead. Much like the FaZe vs. INTZ matchup, the front-runners found themselves led by the lesser-ranked team before the half. Liquid’s attacks continuously impressed and Thiago “xS3xyCake” Reis found another stealth defuser plant to force a 4-2 lead. NiP looked rough on the defense and really needed to pull it together in order to keep Liquid out of the top three.

Liquid seemed content with throwing a decent lead away in round nine. NiP’s Julio “Julio” Giacomelli clutched up a one-vs-two situation in the final second of round nine to give his squad a needed lead in the match. Even with the clock against Julio, he managed to take down Liquid’s Smoke player, recover the defuser, smoke out the Workshop site, plant the defuser, and to top it all off, he got the frag on Jager. It was truly impressive.

NiP built off the momentum that Julio provided in round nine by wrapping round 10 quickly and efficiently. Forcing match point at 6-4 gave NiP a point in the match, which betters their chances of getting to the Japan Finals. Liquid managed to delay the seemingly inevitable thanks to Paulo “psk1” Augusto picking off two crucial members of NiP in the back half of round 11.

On match point, João “HSnamuringa” Deam was left up in the clutch as Maestro. Despite taking a few NiP attackers down, Muringa ultimately fell to NiP’s constant bombardment. NiP now gains even more favorable position in the LATAM division and Liquid maintain a lukewarm season thus far. With NiP winning out 7-5, FaZe will have to bring their best every matchday to delay INTZ from climbing over them in the standings.

The Latin American division of the Rainbow Six Pro League picks back up on Wednesday, July 17 for matchday seven. Fans can catch the official broadcast here.