Team oNe couldn’t repeat a strong matchday one. 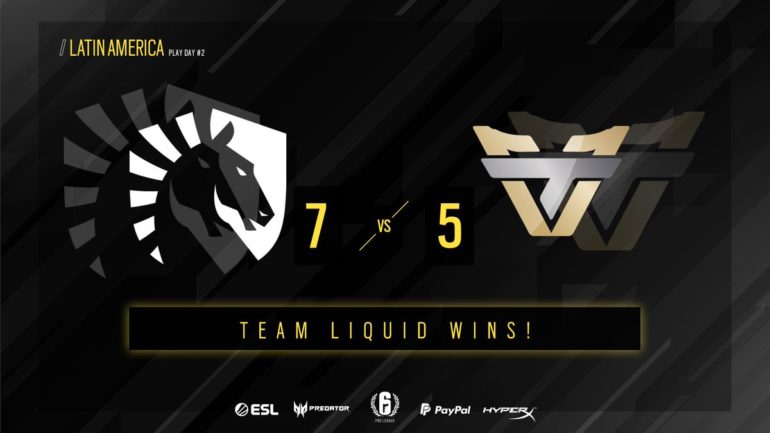 Team oNe’s Rainbow Six Pro League debut was a strong show of force, but their match against Team Liquid was always going to be a tough matchup.

Despite taking a loss to FaZe Clan in their opening match, Liquid still looked to be in decent shape during matchday two. Team oNe was able to knock out round one convincingly, which showed Liquid that they showed up to play. In the early rounds, every frag was met with a prompt re-frag or an entry denial by Team oNe.

Liquid got the defuser down several times on attack and kept pace with Team oNe through the first half of the matchup. What was interesting to see were the adjustments each team made throughout. There were clear adjustments to strategies and where teams chose to place pressure on the map. Consulate has a lot of rotations and chokes to keep an eye on, so it made sense that Liquid would adjust accordingly after losing man advantage. These adjustments were seemingly the only thing winning them rounds early on.

Round five was decidedly a Liquid round after the team managed to level both anchors on site and get the plant off before Team oNe even knew what was happening. There are site re-takes, and then there are situations where it legitimately looks like defenders are attacking. This much was evident when Team oNe’s Castle player had to battle against his own defensive bulletproof barricades to try to get back to the site.

In round six, Luiz “SKaDinha” Salgado made sure he repaid the favor to more than half of Liquid. The final defense for Team oNe saw SKaDinha mow down three of Liquid’s attackers to seal the round and tie up 3-3 at the half. SKaDinha was running a Maestro with what is essentially an eighty-round laser beam of an LMG, so the work wasn’t too hard when Liquid’s attackers pretty much lined up for him to level.

After the half, Team oNe began to fall apart. Despite Consulate being one of the more balanced maps in the rotation, Team oNe allowed Liquid to pull ahead 5-3 after switching sides. Team oNe continued to lose control of the match and allowed Liquid to run up the match to 6-4. While Team oNe was able to hold a defensive round, being pushed to matchpoint and down by two rarely bodes well.

Liquid ended the pain at 7-5, clinching a needed win over Team oNe. While the match wasn’t one-sided the whole way through, it was evident which team was stacked with veterans and which team suffered from inexperience.

The deciding factor in how the match played out was the overall sloppiness of Team oNe’s non-technical attacks. The newcomers had a strong showing in matchday one and although they failed to gain much ground today, they should be proud of taking on one of the LATAM juggernauts with relative poise.