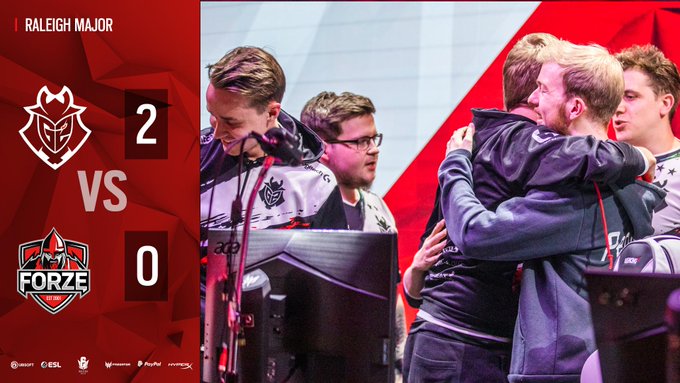 In a not-so-shocking turn of events, G2 Esports took down Russian Challenger League team forZe in the Six Major semifinals in a convincing 2-0 victory.

ForZe have undoubtedly made a name for themselves at the Raleigh Major. Besting some of the top teams in Europe, North America, and Latin America, forZe proved that they’re coming for the Pro League. While G2’s Fabian Hӓllsten could seemingly care less about the Russian newcomers, there’s no denying that Rainbow Six esports fans will be seeing a lot more forZe in the future.

With forZe out of the way, G2 have their sights set on taking down the current EU division front runners, Team Empire. While G2 has had a lackluster Pro League season 10, Empire has been dominating both online and at LAN. But if there’s a team that can get the job done against Empire, it’ll be G2 on LAN.

Empire look strong, but they’re clearly not their immortal selves at this international LAN. There have been some embarrassing mishaps for the “Russian Machine,” and the team will have to come prepared against a team as storied as G2. Considering the way G2 dealt with forZe, Empire should be cautious heading into the grand final matchup.

The grand final will be held Sunday, Aug. 18 following the Creator’s Cup event and an official Operation Ember Rise reveal. Fans can catch all the action on the official broadcast, found here.