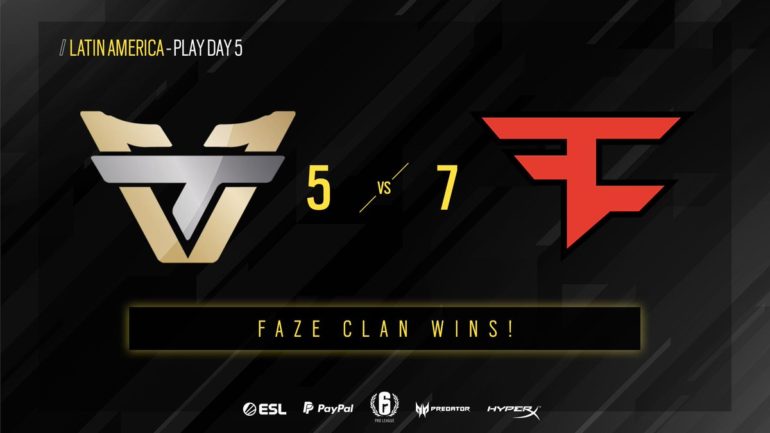 With DreamHack Valencia concluded, the regular season of Rainbow Six Pro League picked back up with FaZe Clan going head to head with Team oNe. While FaZe continues to perform as expected, Team oNe shows promise as the boom-or-bust team of the Latin American division.

The match started out rough with Team oNe took 40 minutes to log in to the match, followed by a complete broadcast cut in round two in the middle of FaZe’s Leonardo “Astro” Luis braving a one-vs-three situation on Kafe. Ultimately, Astro was unable to clutch for FaZe and Team oNe found an early 2-1 lead.

Team oNe continued to steamroll FaZe into the half at 4-2. Even after a heavily FaZe favored pre-match survey, things looked to be heading in Team oNe’s favor. At the very least, the match looked to be headed into draw territory. FaZe finally picked back up by deleting the entirety of the Team oNe roster in round six. A 2-4 deficit is never a good way to enter the second half of a match, but R6 Pro League is full of comebacks and FaZe is a more than capable team.

FaZe gradually built up some much-needed momentum in the second half and brought the match back 4-4. After connection issues mandated a re-host, FaZe With most teams, fans have to worry about a loss of momentum after a re-host but FaZe kept on the front foot with their comeback by picking up another defensive win at 5-4.

Gabriel “cameram4n” Hespanhol clutched up for FaZe in round nine but couldn’t get the job done in round 10. Despite the minor setback, FaZe brought it down to match point at 6-5. Team oNe showed immense potential in this matchup and should be commended on their ability to take such a strong lead against the top team in the Latin American division.

Unfortunately for Team oNe, FaZe held the gate shut against the rookie pro team. Winning out 7-5 gets FaZe one step closer to the rapidly approaching finals. The LATAM giant has left very few points on the table and doesn’t show any signs of slowing down in season 10. Team oNe continues to show boom-or-bust potential but it seems FaZe is their ceiling. The potential is there for Team oNe, but FaZe remains on another level.