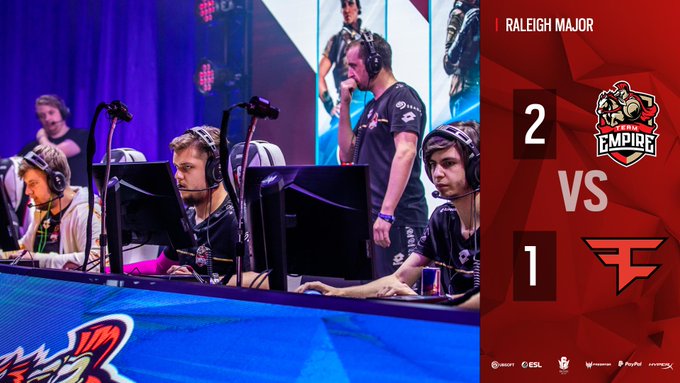 Despite falling to Team Empire in their quarterfinal matchup, FaZe Clan punished the Russian Machine on their own map choice at the Six Major Raleigh. FaZe now joins Vodafone Giants as the only other team to have taken points away from Empire on ClubHouse.

Even though Empire emerged victorious in the series 2-1, FaZe rallied back to a commanding victory over Team Empire on ClubHouse. While Empire closing out Kafe victoriously isn’t anything to bat an eye at, their loss on ClubHouse is a massive upset.

Before their loss to FaZe, Empire boasted a nearly undefeated 14-1-1 record on ClubHouse. Vodafone Giants were previously the only other team to have drawn or won against Empire on ClubHouse. Win or loss, this is a huge point of pride for FaZe and the underrepresented Latin American division.

Empire is heralded as one of the best teams in all of R6. They sit above Vodafone Giants in the European standings, and the Russian Machine looks poised to repeat their season nine Pro League title.

The drama only continued from there as a game crash forced FaZe to replay a round seven that was all but won for the LATAM squad. Empire tailored their defenses to the former round seven FaZe attack but fell in exhilarating fashion. As broadcaster Michael “KiXSTAr” Stockley noted, FaZe looked revved up from having to repeat a round that should have already been in their pocket.

Ultimately, FaZe fell to Empire in the dying seconds of round 11 on the third and final map of the series. While this is the end for LATAM’s presence at the Raleigh Major, Latin American supporters are undoubtedly hyped over the ClubHouse win. The job is far from done for Empire. The Russian squad will have to go through Team Secret if they want a shot at the title.

Only a couple days remain in the Six Major Raleigh. Fans can catch the explosive finale on the official broadcast here.