Gotcha steals the show once again. 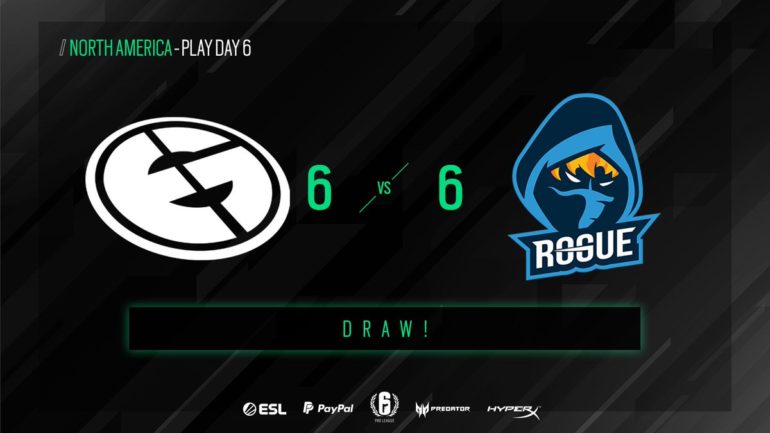 To continue their long climb to the top of the North American division in the Rainbow Six Pro League, Evil Geniuses had to get the win off of Rogue today. Things became much more difficult for Rogue when EG coach Aaron “Gotcha” Chung was forced to fill in for Emilio “Geoometrics” Leynez Cuevas, though.

Between Ammar “Necrox” Albanna having trouble surviving the openings rounds and Troy “Canadian” Jaroslawski being left up in the clutch for two rounds straight, EG did not get off to a good start. Rogue’s defense even looked pretty strong, despite the squad’s unstable track record in the past two seasons.

Aaron “Shuttle” Dugger handled business in round three with some great Pulse plays. Not only was Shuttle a threat face-to-face, but his vertical play from underneath made it nearly impossible for EG attackers to find any comfort on the ingress. Broadcaster Devin “mzo” Becker noted that the Pulse was likely a key part of Rogue’s success due to the information and communication Shuttle was providing.

Necrox continuously died first through the first four rounds and while his Jackal seems unimportant, his absence was felt in the lack of roam hunting and flank watching. With four rounds in the bag, it looked like Rogue was going to take advantage of EG’s different lineup.

It took EG five rounds to find a win but when they woke up, they woke up hungry. After Austin “Yung” Trexler grabbed a cheeky kill on Rogue fragger Shuttle, the stage looked set for a strong comeback, at least until the official stream cut across all platforms. It appeared that Gotcha had a killer round or two since he led EG in frags with 10 total. As long as Gotcha was alive, Rogue had a bad time. It looked like EG was on the warpath to a comeback victory as the squad push a 5-5 scoreline.

Rogue lost some steam on the attack but snatched the match point at 6-5 right from under EG. Both teams needed more than a draw from this matchup and it looked like either team’s to lose.

EG found the draw at 6-6 as the clock ran down and forced Rogue into a rough rush onto site. From there, EG was allowed to just melt the rushing Rogue squad. While this outcome isn’t an upset, it did take quite a while for EG to pick things up and even then it was thanks to Gotcha..

The North American division of the Rainbow Six Pro League returns Monday, July 22 for matchday seven. Fans can catch the official broadcast here—provided it isn’t down.