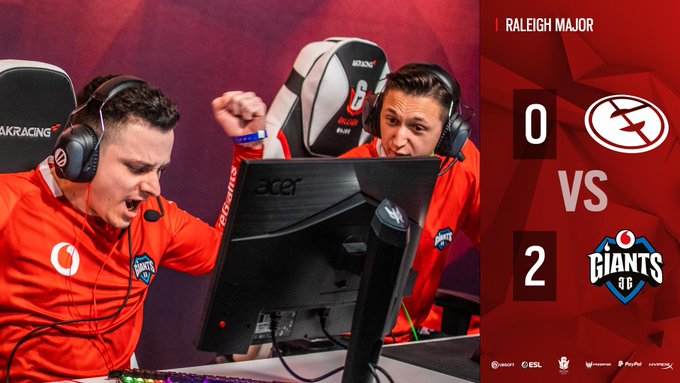 Today’s been a rough day for North American Rainbow Six Siege fans. Evil Geniuses and Rogue have both been eliminated from the Six Major Raleigh. For EG’s fans, the loss stings even more since this is the first time the team has gone out in the group stage of a LAN event.

The Six Major Raleigh has been full of upsets during the group stage but EG’s loss to Vodafone Giants is the hardest pill to swallow thus far. This is the same squad that almost went all the way in the season nine Pro League Milan Finals against Team Empire, also fittingly known as the “Russian Machine.”

Broadcaster Samuel “Stoax” Stewart went so far as to tell EG to leave their heads on the table and to go buy some instincts instead—harsh but fair criticism considering North America’s performance at the Raleigh Major so far. Watching VGIA play worlds better than EG was a shock, but Stoax seemed to have nailed it in terms of what was going awry. The broadcaster highlighted VGIA seemingly winning gunfights purely on instinct instead of overthinking. Fans need to look no further than VGIA’s Lukas “korey” Zwingmann’s one-taps to get the picture.

For North American division fans, there’s little left to cheer for at the Raleigh Major. SSG are really the lone North American wolf left in the race for sure. TSM could best MIBR in the decider match, and DarkZero could make it work against FaZe, but these are tough matchups. DarkZero went out in the quarterfinals of the season nine Milan Finals, while FaZe took down VGIA in the quarterfinals as well.

Decider matches continue throughout the day with a break coming on Thursday. There are still three solid days of action left at the Raleigh Major and a full Operation Ember Rise reveal coming on Sunday, Aug. 18. Fans can catch the official broadcast here.