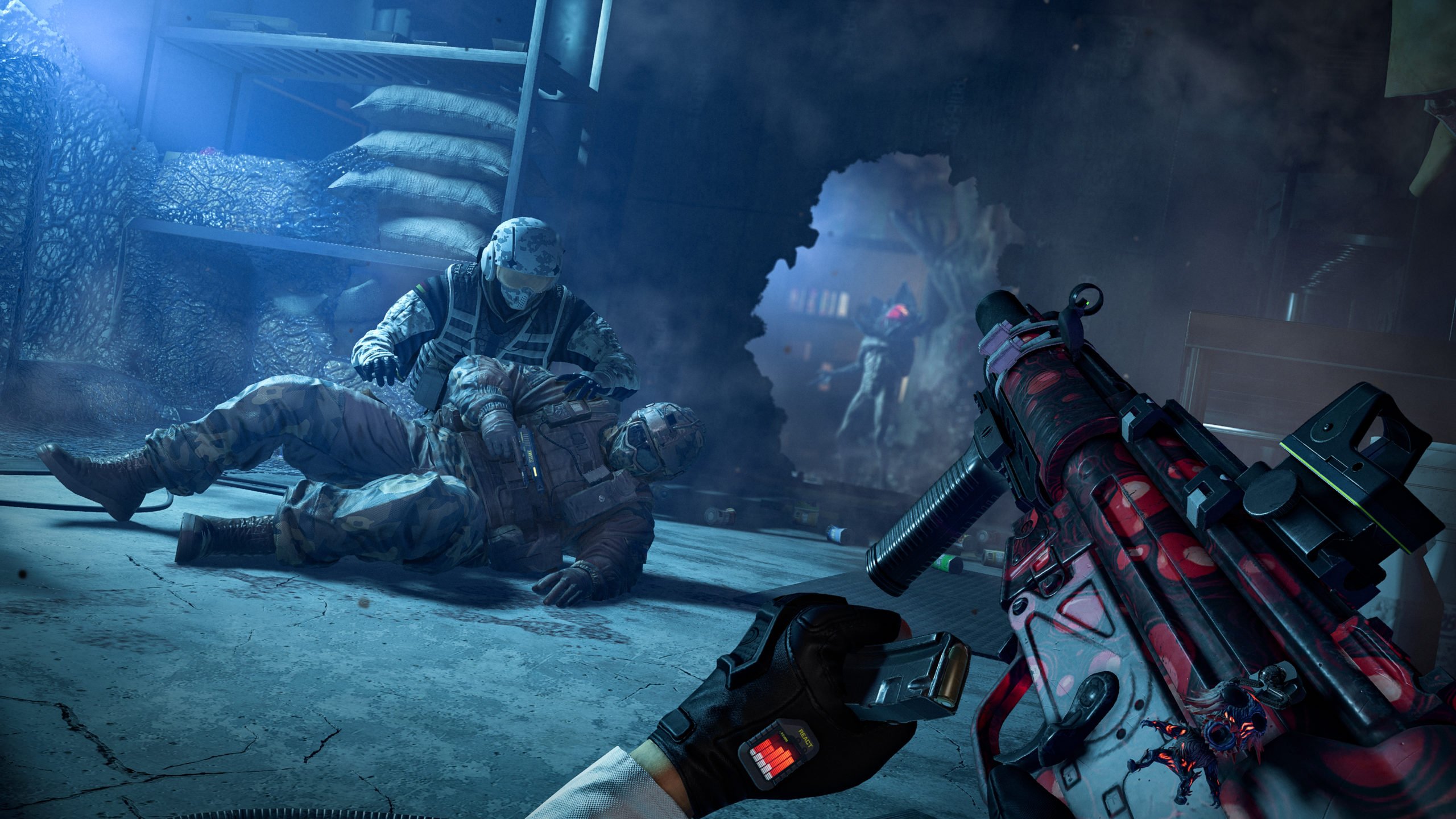 Rainbow Six Extraction is bringing a host of operators and a veritable arsenal to help players fight off Archaeans. With 18 possible characters and multiple choices of guns for each of them, it’s easy to get caught thinking about several aspects of your loadout.

All operators start with one primary weapon and a sidearm unlocked from the beginning. Gathering XP with them will advance their rank, however, offering perks like improved ability effects, more armor or speed, and a plethora of other weapon options for all scenarios.

Loadouts help operators prepare for different circumstances. These setups should account for the type of mission, team synergy, and, of course, personal preference. Each player will cook up their own favorite loadouts based on playstyle, combining weapons and REACT gadgets to better suit their taste.

That said, some weapons can outclass others based on damage, versatility, or even mag size, and they seem to stand a bit above the rest. Here are the best weapons for each operator in Extraction, in our experience.

Sometimes, you just need stopping power—and Doc’s loadout brings it in droves. You can use a high-powered HK417 as a non-silenced firearm for when a situation gets tough and the P9 as your stealth gun. You can also suppress the HK417 and roll with the LFP revolver for maximum damage, or run a silenced MP5 with the revolver if you don’t like DMRs. It’s hard to ditch the HK417’s stopping power, though.

Ela is locked to the RG15 sidearm—but that’s the only sidearm you’ll need anyway. This leaves her with a few choices for a primary firearm, but the LMG-E just outclasses the Scorpion thanks to its sheer mag size and balance between damage and fire rate, especially if you don’t suppress it. It also puts the M762 in the backseat due to the mag size. But if you feel you want a bit more damage or a shorter mag with a faster reload, go with that instead.

Though Thermite isn’t on the field in Extraction, Pulse brings the breacher’s 556XI from Rainbow Six Siege—and that’s the gun you should be aiming to use. The UMP45, on the other hand, isn’t a bad choice until you unlock the 556XI at level nine, but ditch it once you do. For sidearms, take the M45 for more stopping power or go with the alternative if you want more rounds in the mag.

Though Alibi has a versatile loadout with a shotgun as a sidearm, odds are you’ll just land on either the Alda 5.56 or the AA-12.

Alibi gets two sidearms, but only one of them is suppressed. If you want to run a primary without a silencer, then the KERATOS is the only choice. It’s a solid option, though, since Maestro’s Alda 5.56 from Siege also shreds in Extraction. And unless you really like the Mx4 Storm, you might be better going with it thanks to the bigger firepower and mag size without a significant drop in fire rate. If you want overkill, though, you can take the AA-12 automatic shotgun and run the KERATOS as your silenced weapon.

Finka already starts with one of the best weapons in the game, so why fix what isn’t broken? You can easily run the SPEAR .308 throughout your entire journey with the operator. But if you really want to fire without ever reloading, the 6P41 comes with a whopping 100-round magazine. For your sidearm, the PMM packs more stopping power and might become your preference over the GSH-18.

Some operators have amazing loadouts that make it hard to choose from. It’s also hard to pick a gun for Hibana in Extraction, but because there’s nothing truly extraordinary about her loadout.

Hibana’s Type-89 is good in Siege, but it’s a bit clumsy in Extraction due to its 20-round magazine. Unlocking the MP5SD gives you a more reliable choice, though one with a lot less firepower and an integrated suppressor. These two guns have drawbacks, so pick whichever suits you best. For sidearms, pick the P229 unless you can handle the Bearing 9.

Lion has access to one of the best firearms in the game by default—and he gets the HK417 as overkill at level three. Both the V308 and the HK417 are excellent options, so picking between the two is ultimately a matter of preference. Like Doc and Rook, Lion can take the heavy LFP586 revolver as a sidearm, but pairing the HK417 or the V308 with a suppressed P9 lends more versatility to your kit since your high-damage weapon will have more than six rounds in the chamber.

Sledge gets his first non-shotgun option at level six with the L85A2 and gets the AR33 at level nine. The AR33 has a more manageable recoil and a higher fire rate, though it deals less damage per shot and has a slightly smaller magazine. Much like other operators, it’s a matter of preference with picking a weapon for Sledge. Whatever you choose, you can run it without a silencer and use your pistol as your main sneaking weapon.

Much like Lion, Vigil has been blessed with a strong loadout and an even stronger ability. The K1A will be your bread-and-butter firearm with Vigil, so by the time you unlock the Mk14, you might be too used to it to adopt a new gun. Both are great choices, though, and both depend on what you choose.

Vigil also has the unique issue of not having a pistol at his disposal, which opens up different choices if you don’t like his sidearms. With so many good options on the table, you can’t really go wrong when making Vigil’s loadout, though the BOSG is far more situational than its counterparts.

With IQ, you don’t really have to worry about picking a sidearm since the P12 is her only option. The choice runs basically between using the 552 Commando or the AUG A2. They’re similar enough to make it a matter of preference or availability since she only unlocks the Commando at level nine.

This isn’t Year Five of Siege, so you’re allowed to ditch Jäger’s 416-C. The 552 Commando brings more firepower per shot and less recoil with a slightly lower fire rate. When the tooltip says the 416-C has high recoil, it’s not entirely exaggerating. Of course, the 416-C is still a viable option as long as you can handle its kick.

Rook and Doc have a similar loadout and face the same dilemmas when choosing weapons. The HK417 brings you more single-shot firepower, but if you’re not fond of DMRs, the MP5 and the P90 are still solid choices for Rook—though the MP5 is more user-friendly.

Fuze has been blessed with an amazing loadout. The 6P41 is good enough on its own, though it comes with the hefty reload times intrinsic to all LMGs. He unlocks the AK-12 at level three, giving players a similar damage per bullet, but a higher fire rate and a smaller magazine. And to round off his kit, he gets the SPEAR .308 at level nine.

The 6P41 comes with the overkill magazine of an LMG, the AK-12 brings a higher fire rate at the expense of a smaller mag, and the SPEAR has a slightly more forgiving recoil. Pick your choice based on what fits your preference better—and take the PMM as a sidearm due to its stopping power.

Smoke’s loadout in Extraction comes with a new addition that’s not in his arsenal in Siege: the L85A2. His signature FMG-9, however, is still a solid choice with a much smoother recoil, so picking between the two will be a matter of preference. The L85A2 has higher damage per shot and a bigger magazine, so take that if you get used to the recoil. But you won’t really be far behind if you take the FMG-9.

Sidearms are up to preference and running a shotgun with the SMG-11 was a trademark Smoke trick in Siege. With Extraction‘s gameplay, however, you might get more use out of the P226.

Tachanka doesn’t unlock the AK-12 until you level him up a bit, but the 9x19VSN is a great weapon choice until you get it—and sometimes even after you do. The AK-12 gives you more stopping power and a higher fire rate, though, so it gets an edge.

Tachanka faces the same dilemmas as other Russian operators when choosing a sidearm, and the usual answer is going with the PMM for firepower. You can take the GSH-18 if you want a bigger magazine, though.

The Para-308 is surprisingly well-rounded for a starter weapon, with manageable recoil and a serviceable fire rate and mag size. Add to that a 1.5x scope and you can run it in most content. The M249 SAW features similar stats but has a colossal 100-round mag size and kicks a bit more. Take whichever you can get. Capitão veterans will also find the M12 at level nine, but it brings a lower fire rate and damage per bullet than the other two choices. And since he only has the PRB92 as a sidearm, there’s no way to get away from it.

Our favorite loadout for Gridlock is unlocked early on, so you’ll have plenty of time to get used to it. The F90 is her starter weapon, and though it doesn’t have the same firepower as an AR, it’s a comfortable and reliable weapon. The M249 SAW is unlocked at level three, bringing more firepower per shot, a lower fire rate, and a 60-round magazine. We prefer the F90, but the M249 is also a solid option.

Gridlock unlocks the M9 Commando at level nine, though the weapon doesn’t really boast better stats than the F90. You should tinker with the loadout if you want to bring the Super Shorty, though that will require running a silencer on your primary and can sacrifice your damage output a bit.

Nomad has a couple of different avenues when choosing her loadout. Playing her without using the signature .44 Mag Semi-Auto feels like a waste, but the scoped pistol isn’t necessarily a must-have.

For her primary, the AK-74M and AUG A3 are solid choices. The AK-74M comes with a bigger magazine and lower fire rate than the ARX200, which makes it less useful when bursting but better for scenarios with many Archaeans. The AUG A3 comes with less firepower than the two options, but it’s an alternative if you’re having trouble holding the recoil on the two ARs.

For pistols, Nomad can have the .44 Mag Semi-Auto or the PRB92. The .44 doesn’t take a suppressor, though, so players will have to trade off some damage on their main firearm to bring the scoped pistol to the field. The PRB92 is a more versatile choice that doesn’t sacrifice much damage on players’ kits and can still function as a silenced weapon for sneaking around. There is some value in the .44 Mag, though, even if it can’t run a suppressor and has recoil so high it can disorient you.