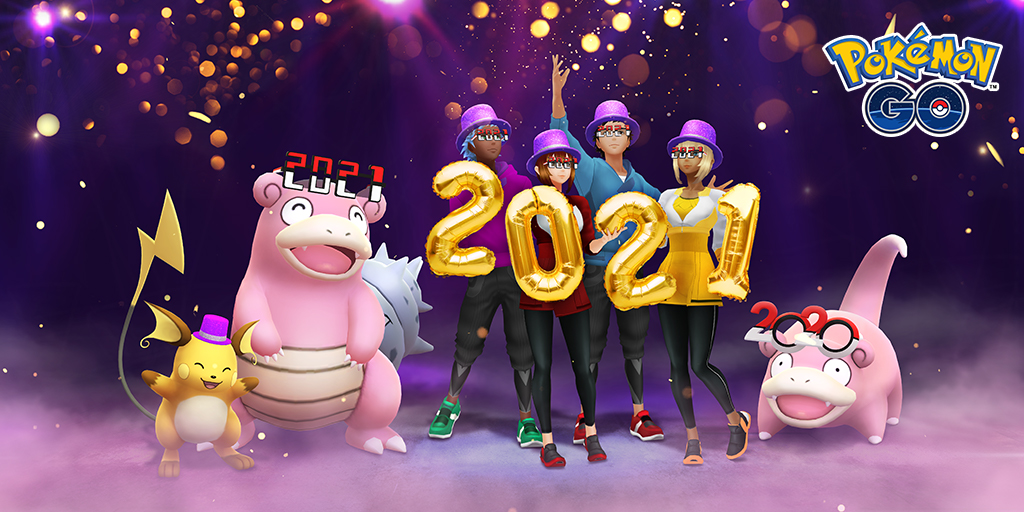 Niantic is ready to ring in the new year with a new Pokémon Go event, one that will include a Slowpoke wearing 2020 glasses and new avatar items.

From Dec. 31 to Jan. 4, players can encounter multiple Pokémon wearing festive costumes, increased encounters for certain species, and the chance to capture a shiny Wynaut.

Slowpoke wearing 2020 glasses will be spawning in the wild, appearing in raids, hatching from two-kilometer eggs, and given out as a Field Research reward. And if you manage to evolve it into Slowbro during the event, that Slowbro will be wearing 2021 glasses.

Pichu, Pikachu, and Raichu wearing a special New Year’s hat will also be available during the event. Pichu will be hatching from two-kilometer eggs while Pikachu will be in the wild and available as a research task reward.

Raticate, Wobbuffet, and Wurmple wearing party hats will all appear in one-star raids. Both Klink and Espurr will be available in those raids too, though they don’t have any special hats. Eevee wearing a party hat will be available as a Field Research reward encounter.

Wynaut will be hatching from two-kilometer eggs throughout the event, with a chance to encounter a shiny Wynaut also available. Shiny Wynaut was first made available during the Eggstravaganza 2018.

Players will be able to get 2021 Glasses and the New Year’s Party Hat avatar items in the in-app shop starting on Dec. 30. Special item boxes will also be dropping during the event.

As a final bonus, players will get double egg hatch Candy and Stardust during the event. Eggs in Incubators will also only take half the time to hatch, which is perfect for players who really want a shiny Wynaut.