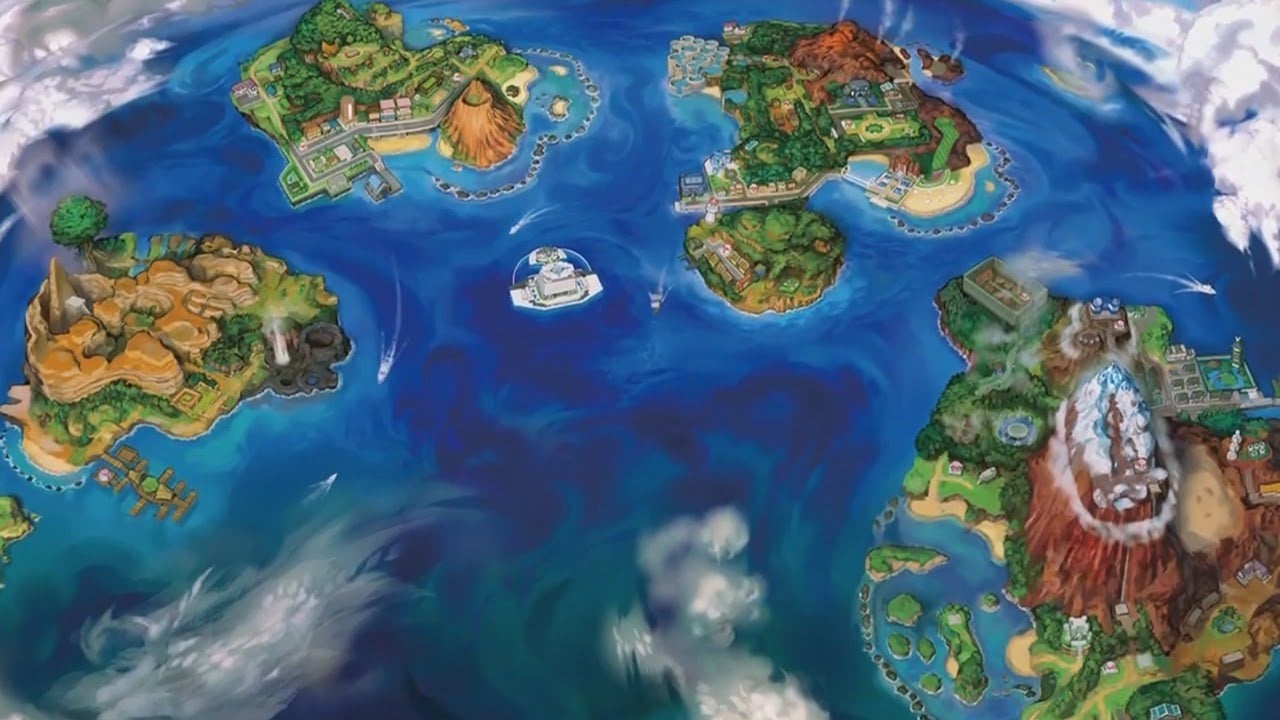 In the Pokémon universe, all of the creatures (aside from human beings) are classified as Pokémon. You can’t have a pet dog in the games or series unless you could catch a dog-like Pokémon, such as Rockruff. Do not worry about where to catch one since there will always be a Pokémon available wherever you go. You can find many kinds of these Pokémon in the different Pokémon regions.

The Kanto region was introduced in the franchise’s first game and anime episode, and more were teased to come. New regions are introduced when there is a new mainline game or season that will debut since that helps JRPGs feel fresher and more modern.

Pokémon has been around for over 25 years, and a handful of regions are already established. Some of these regions introduce a new culture or something these places are known for. We’ve ranked the 10 best Pokémon regions, ranked based on their geography, significance to the games and story, and overall impact on the community.

Kalos was introduced in Pokémon X and Y as the sixth region in Pokemon. Its shape depicts a five-pointed star that makes it geographically interesting, as well as the various rivers and waterways you can find here. Kalos is inspired by the metropolitan France aesthetic, which is different from the more Japanese-like setting in other regions.

Kalos’ main professor is Professor Sycamore. The region is also home to 72 different Pokémon, with Chespin, Fennekin, and Froakie as the three main starters. Castles can be found here, including the landmark known as the Tower of Mastery, located in Shalour City.

The setting of the Pokémon Black and White games and series, Unova, has a large geographical environment that is distant from the other regions. The Pokémon Company CCO Junichi Masuda implied in his director’s column that the Unova region is heavily based on the New York City metropolitan area, drawing inspiration from the city’s landmarks.

Exploring the Unova region is interesting since it has a deep array of mythology based on the Legendary Pokémon duo of Reshiram and Zekrom, which are regarded as the Pokémon representing the Yin and Yang. Professor Juniper, the first female professor, introduced in the franchise, is also the region’s resident Pokémon expert. Unova also houses 156 different Pokémon, including its three starters, Snivy, Tepig, and Oshawott.

Orre is the only non-mainline Pokémon game region on our list, sitting at number eight. The region is the main setting of the Generation Three side series games known as Pokémon Colosseum and Pokémon XD: Gale of Darkness. All the Pokémon you can catch in this region are listed as being met on a distant island when you transfer those to other Pokémon games.

In this region, there is no Pokémon league. Instead, trainers can engage in consecutive battles almost everywhere here in Orre. Its vast wasteland can be useful while fighting, especially in allowing trainers to have a wide space to showcase some of their Pokémon through combat. Double battles also become more exciting here.

But what could be Alola’s biggest contribution to the Pokémon franchise is the introduction of the Alolan Pokémon. These are some alternate versions of a handful of Pokémon that can only be found in the region, with some allowing to change their types. Examples of Pokémon with an Alolan version include Ninetails, Persian, Muk, and Marowak.

Pokémon Legends: Arceus has been one of the most anticipated games in the franchise and did not disappoint when released earlier this year. The game introduced the region of Hisui, the ancient version of Sinnoh. Its partial open-world design and ancient Japanese aesthetic made the players’ experience more appealing, especially in exploring the different areas of the region.

Some fans even compared the game to Zelda: Breath of the Wild because of its vast open world. Also, the myth and history encompassing Hisui added more flavor to doing adventures and missions in Legends: Arceus.

Seeing the areas you explored in the latest version of Sinnoh as its ancient counterparts is a treat, as well as the different Pokémon you can find around. Some Pokémon even have different regional versions, known as the Hisuian form, which includes Arcanine, Braviary, and Sneasel.

Similar to Hisui and Alola, the Galar region has its region form for several Pokémon. Known as the Galarian form, some Pokémon that have one include Rapidash, Mr. Mime, Linoone, and the Legendary Bird trio of Articuno, Zapdos, and Moltres.

The Galar region is also heavily influenced and inspired by the aesthetic of the U.K., joining Kalos as the few Pokémon regions to draw inspiration from European countries. This allows players to have a wonderful experience exploring the region, especially in some of its settlements. Towns such as Ballonlea, Motostoke, Circhester, and Hammerlocke contribute to the prestigious visuals the Galar region can offer players.

Known as the first region to introduce snowy routes, Sinnoh has been known to be Generation Four’s main setting, with the events of games such as Pokémon Diamond, Pearl, and Platinum taking place here. And as mentioned earlier, a handful of myth covers the region, making the players’ explorations more meaningful than ever.

Sinnoh also introduced some of the franchise’s most notable Legendary Pokémon, such as the Creation Trio of Dialga, Palkia, and Giratina, the Lake Guardians comprised of Uxie, Azelf, and Mesprit, the Lunar Duo of Cresselia and Darkrai, the protector of all volcanic activity, Heatran, the fourth Legendary Titan, Regigigas, and the mythical and considered as the God and creator of the Pokémon universe, Arceus. Brock, one of Ash’s main travel buddies since the first anime series, also parted ways with the Pokémon poster boy in Sinnoh when he decided to be a full-time Pokémon doctor.

Hoenn was introduced in Generation Three. This island region is located in the southwest part of Kanto and Johto, which is filled with many beaches. Players tend to explore here more using their Water-type Pokémon while surfing. But Hoenn stands out among other regions because of the diversity of Pokémon.

There are 386 different Pokémon that you can find in Hoenn. The region is also known for being the setting of some of the most iconic Pokémon games of all time, such as Pokémon Ruby/Omega Ruby, Sapphire/Alpha Sapphire, and Emerald. According to Junichi Masuda, a bonus fact about the region is that Hoenn’s design is being rotated 90 degrees clockwise, making the adventures more engaging.

Aside from Hisui, the Johto region also established an aesthetic based on the Japanese culture, which can be seen in ancient JRPG regions even in other games. It is based on Japan’s Kansai region, where some of Johto’s iconic landmarks include the Ruins of Alph, Sprout Tower, Bell Tower, Burned Tower, and the Slowpoke Well.

Johto is also the home of 251 different Pokémon, especially those introduced in Generation Two. Some of these include a handful of Legendary Pokémon, such as the Legendary Beasts trio of Entei, Raikou, and Suicune, the Tower Duo of Ho-Oh and Lugia, and the mythical Pokémon Celebi, which is known as the “voice of the forest.”

The games in Johto, namely Pokémon Gold/Heartgold and Silver/Soulsilver were also the first two titles to introduce the post-Elite Four content, which impacted the franchise in terms of gameplay tradition.

Finishing our list and grabbing the number one spot on our list is where it all started, the very first region in the Pokémon franchise, Kanto.

The first 151 Pokémon you can find in the PokéDex debuted in Kanto, including the Legendaries like Articuno, Zapdos, Moltres, Mewtwo, and the mythical Mew. Though it may not have the best landmarks in terms of visuals, the region is where some of the most iconic cities can be found, such as Pallet Town, Viridian City, Cerulean City, and Saffron City.

Kanto is also the only region so far in Pokémon which is based on a real Japanese region with the same name. It is also the setting of the first mainline games in the franchise, namely Pokémon Red and Blue. Indeed, the Kanto region has the most impact on the whole Pokémon series and community, paving the way for trainers and fans with the mantra of ‘gotta catch ‘em all.’