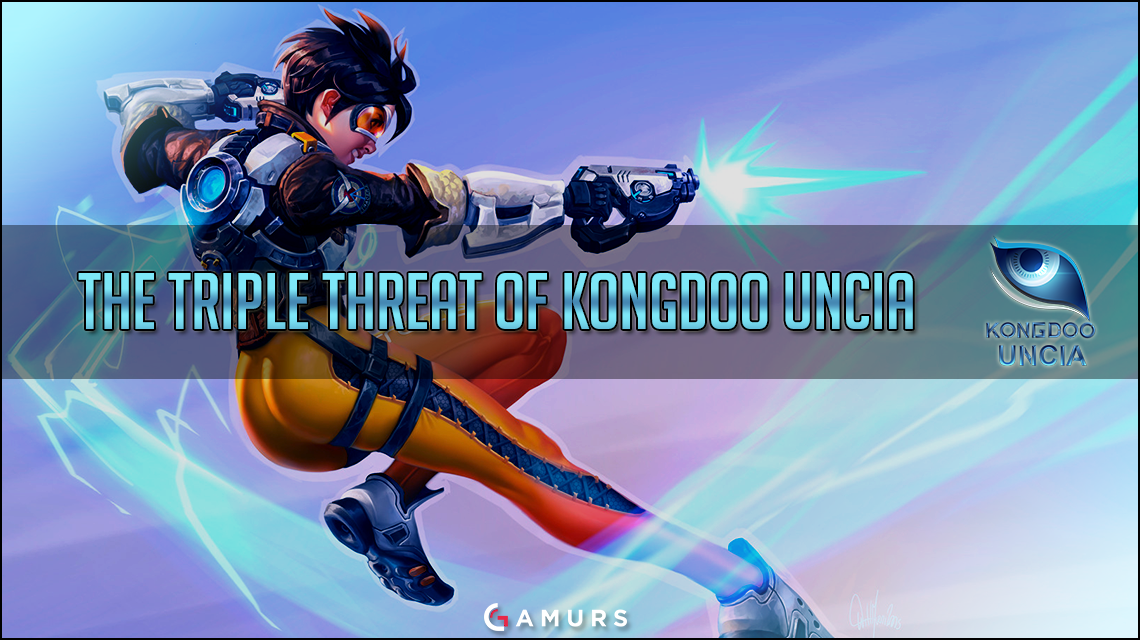 Last season, if you asked what the best part of Kongdoo Uncia was, the answer would have been their teamplay and shotcalling. But as we saw last night in their Apex season two debut, their roster moves have opened up room for some serious star power.

Panker and Birdring were already making waves on their own last season. Now, with the addition of Butcherr from their sister team Panthera, the trio is already showing that individually they are each a force to be reckoned with; but together, they pose a threat to the established emperors of Overwatch.

Continue to Keep Your Eye on Him: Panker

Just over three and a half months ago, I highlighted Panker as the player I thought you should keep your eye on from Uncia. I praised him for the offensive side of his Reinhardt play, an area which he still excels and perhaps leads the world in.

I still yearn for the day when we have detailed player performance statistics in Overwatch. For now, we still have to subject players to the eye test. Luckily for Panker, he looks amazing under the eye test. His charge and fire strike accuracy are both uncanny and he frequently snipes kills with both abilities to open up advantages for Uncia. But by far the most impressive part of his play is how he uses Reinhardt’s ultimate Earthshatter.

Panker has made a name for himself as the sneakiest Reinhardt in the world. He often utilizes strange positions that nobody is concerned with to land huge impact ultimates, like the one above, to instantly win a team-fight. But beyond that, Panker is perfectly adept at playing the Reinhardt vs. Reinhardt mind game, a duel he frequently wins, or cheats by sneaking his ultimate just around the edge of his foe’s shield.

His combination of smaller but consistent impact plays and explosive game changing plays makes him a star in his own right. But luckily for Panker’s back, he is now sharing the duties of playmaking tank with his new teammate Butcherr.

I Promise his Name is Spelled Correctly: Butcherr

For anyone who is unaware, Butcherr played in the last season of Apex on Kongdoo Uncia’s sister team Panthera. On that roster, he was the primary tank responsible for playing Reinhardt and Winston. Of course, on his current team, Panker is responsible for playing those picks, which opens up Butcherr to play an off tank role on either Dva or Zarya. His Dva was perfectly fine, but after her nerfs, she is no longer the juggernaut she once was and it is harder for Dva players to distinguish themselves.

Where Butcherr became a serious threat was on Zarya. As we see in this clip, Butcherr is the benificiary of Lucid’s Nano Boost, and he delivers. He easily takes out his counterpart in the one vs. one, which allows him to finish charging his Gravitation Surge. Immediately, he capitalizes on his advantage and uses the ultimate to secure the team-fight win and flip the point in Uncia’s favor.

Kongdoo Uncia entrusted their one ultimate to Butcherr. He was already charging Graviton Surge, a notoriously slow building ability, faster than nearly every other player in the game was building theirs. But with the extra damage output he was able to be the third player to reach an ultimate, even ahead of the enemy Ana. He uses the edge given to him to turn the momentum in his team’s favor.

This wasn’t the only instance either. The very next map on King’s Row, he once again took a Nano Boost and found himself a quad-kill in the backline of Afreeca Blue, punishing the tanks and supports for splitting from their divers. Butcherr is certainly not the only Zarya player capable of being an offensive threat in addition to the utility role. But the moments at which his impact is felt are absolutely critical to punishing the enemy team.

Butcherr and Panker are both perfectly capable of winning you a team-fight on their own, but as we saw, the option that Kongdoo Uncia most often put their money behind was the new-look Birdring.

Look at him Soar: Birdring

In the first video I linked, Reinforce mentions how excellent Birdring was as a Roadhog player. While that’s true, as he was a terror, he has been relieved of his Roadhog duties. In fact, Birdring and Uncia’s other DPS player, DNCE, have effectively swapped roles.

If we’re being honest, DNCE is the worse of the two DPS players. With him now playing Roadhog full time, his game impact is arguably higher than it used to be. Since he doesn’t receive Nano Boosts like Roadhogs do on other rosters, the worst he can do is miss a hook, only to get another shot in six seconds as opposed to blowing a Nano Visor or Nano Blade combo. He is a perfectly serviceable Roadhog player, which frees Birdring to unleash his Genji upon the world.

Birdring played Genji before in Apex, but only briefly. On Hanamura, he selected Genji as his stall hero as opposed to a Winston or Mei. It didn’t seem inconsequential to me at the moment, but in hindsight, we know it’s because Genji was a natural comfort pick for him.

Birdring’s Genji was no joke. He went toe-to-toe against a DPS the caliber of Recry and a Genji with the skill of Arhan and emerged victorious. He certainly benefited from Zarya Bubbles, Nano Boosts, and in the clip above, an insanely well timed Sound Barrier. But that isn’t to say his micro decisions weren’t fantastic.

He spotted Recry approaching the point, and upon hearing Deadeye being channelled, immediately dashed into melee range to begin deflecting, which forced Recry to cancel the ultimate or die. During the dash, he fired off a wave of shurikens, leaving Arhan low. Rather than attempting to fight McCree at range in a hitscan against projectile duel, he stepped inside briefly to cast his ultimate. Using the dash reset from Dragonblade, he quickly executed Recry before turning on the rest of Afreeca Blue.

Birdring also showed off an affinity for hitscan heroes, as he picked up both the established meta staple Soldier 76 and the flashier McCree. On McCree, he played a shockingly heavy flank style where he found picks alone in the backline with a quick Flashbang. Other times, he was a bit ambitious and got taken down himself.

In the end, his ability to be creative and make plays on multiple different heroes makes him such a dynamic threat for his foes. If it were just Birdring as the threat, it would be rather simple to play around. However, now we are getting at the crux of the issue; that Uncia doesn’t have just one threat.

If we look back at FaZe Clan during the heyday of Genji play, you see an obvious trend emerging. Despite their refusal to admit it, Shadowburn is the star of that team and receives an uneven share of the team’s resources. He would nearly always be the beneficiary of Nano Boost and Zarya bubbles in order to maximize the efficiency of his Dragonblades.

Since the FaZe Clan roster was relatively one-dimensional, all it often took to defeat them was to shut down Shadowburn. With overwhelming resources and focus put onto a single player, if that player makes a mistake, it can cost the entire team the match.

On Kongdoo Uncia, there is no such focus. In any given fight, either Panker, Butcherr, or Birdring may be the carrier of Nano Boost and each player, given the chance, has proven their ability to carry a team-fight.

Birdring does receive a higher share of the Nano Boosts, but this is normal, as he is the one responsible for dealing damage within the fights. But due to the prowess of the other two playmakers on the roster, even if Birdring is focused out, it opens up space for them to operate in and carry the fight themselves.

King Killers in the Making

The unique triple threat of playmakers that Kongdoo Uncia has makes playing against them incredibly difficult. There are already enough variables to factor in team-fights and Uncia forces even more upon their foes. It’s going to be difficult for any roster that can’t match Uncia’s skill pound-for-pound to find success against them because of the high likelihood of simply getting outplayed.

I have no doubts that this roster can make a deep run in the Apex playoffs, likely even make the finals. However, the real question is can they dethrone the current emperors in Team EnVyUs? Until we see how EnVyUs also performs on this patch, it is tricky to say. But what I can guarantee is that if this Uncia roster faces EnVyUs, it will be one hell of a match.

What other teams have impressed you so far in Apex? Comment below or tweet your answer to us @GAMURScom or @GAMURS_OW