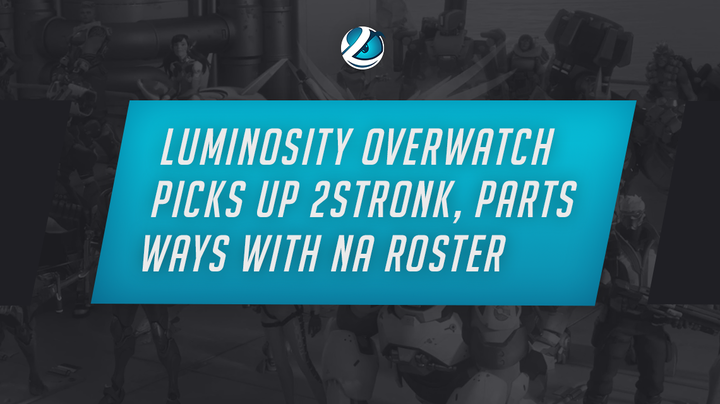 In a stunning announcement this afternoon, Luminosity Gaming announced a brand new Overwatch team to replace their former NA roster. LG has picked up “2sTroNk,” a top-10 EU team consisting of players from all across Europe, with the intentions of moving them to a team house in North America.

The announcement was made in conjunction with another announcement to confirm that they have gone separate ways with their former NA roster, featuring Seagull and Gods, once known as “MixUp^“:

“Today we officially announce the newest acquistion by Luminosity Gaming, with the signing of European Overwatch roster ‘2sTroNk’.  Led by shotcaller, Vytis ‘Mineral’ Lasaitis with Arthur ‘EISSFELDT’ Marx, Jani ‘Tseini’ Kahkonen, Tim ‘Manneten’ Bylund, Dominik ‘Ruster’ Waffler, and Kalle ‘Zave’ Nilsson rounding out the lineup.  Currently ranked around the top 10 in the World (GosuGamers), the team consists of three Swedish players, 2 German players, and one player each respectfully from Norway and Finland.  Luminosity will be relocating the team in the near future to North America where they will have a gaming house, state of the art equipment and all the tools needed to focus on climbing the ranks!

With that announcement it is with a heavy heart we announce the release of the former MixUp^ lineup.  With contracts set to renew shortly, both parties have decided to seek new opportunities.  It was a fun ride and we wish them the best in their new adventures!”

The team found quite a following and much notoriety thanks in large part to the popularity of DPS player Brandon “Seagull” Larned, the top Overwatch streamer on Twitch. Seagull’s popularity and skill combined with his team’s willingness to stick together should mean that they won’t have a hard time finding a new organization to play for.

Is it time for Seagull and his team to join forces with Shaquille O’Neal?

The former NBA Champion and All-Star tweeted at Seagull just over a week ago, so it appears that there could me some mutual interest going forward.

What do you think of LG’s new squad? Where should Seagull and co. go next? Let us know in the comments below. Be sure to follow @GAMURScom for more Overwatch esports news.