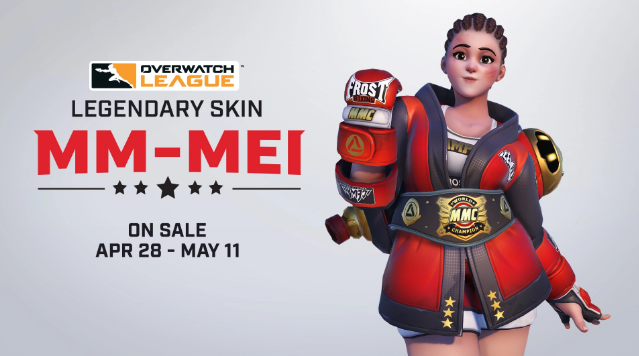 Mei is getting an awesome new Legendary skin to commemorate the Overwatch League’s May Melee tournament.

The “MM-Mei” skin for Mei suits her up in an MMA fighter outfit, complete with fighting gloves, a fighter’s robe, and some sweet-looking MMA fighter braided hair.

The skin was “inspired by the intensity and distinctive fashion of mixed martial arts, and is the first tournament-inspired concept brought to life in the game,” according to Blizzard.

“Since the May Melee is the first Overwatch League tournament of the year, we wanted to design a skin that represents the peak of competition,” Blizzard said. “We felt combat sports like boxing and MMA embodied the theme well and used this to begin designing the Legendary skin. Last year we saw others in the community having fun with the May-Mei pun, and therefore felt Mei was the obvious hero choice for a May Melee skin.”

Here’s how to grab the skin before it’s gone.

How to get Mei’s MM-Mei skin

MM-Mei will be available for 200 League tokens from April 28 through May 11. Once it’s gone, it’s gone, so be sure to grab it as soon as possible. The skin can be found for purchase in the Overwatch League section of the game’s main menu.