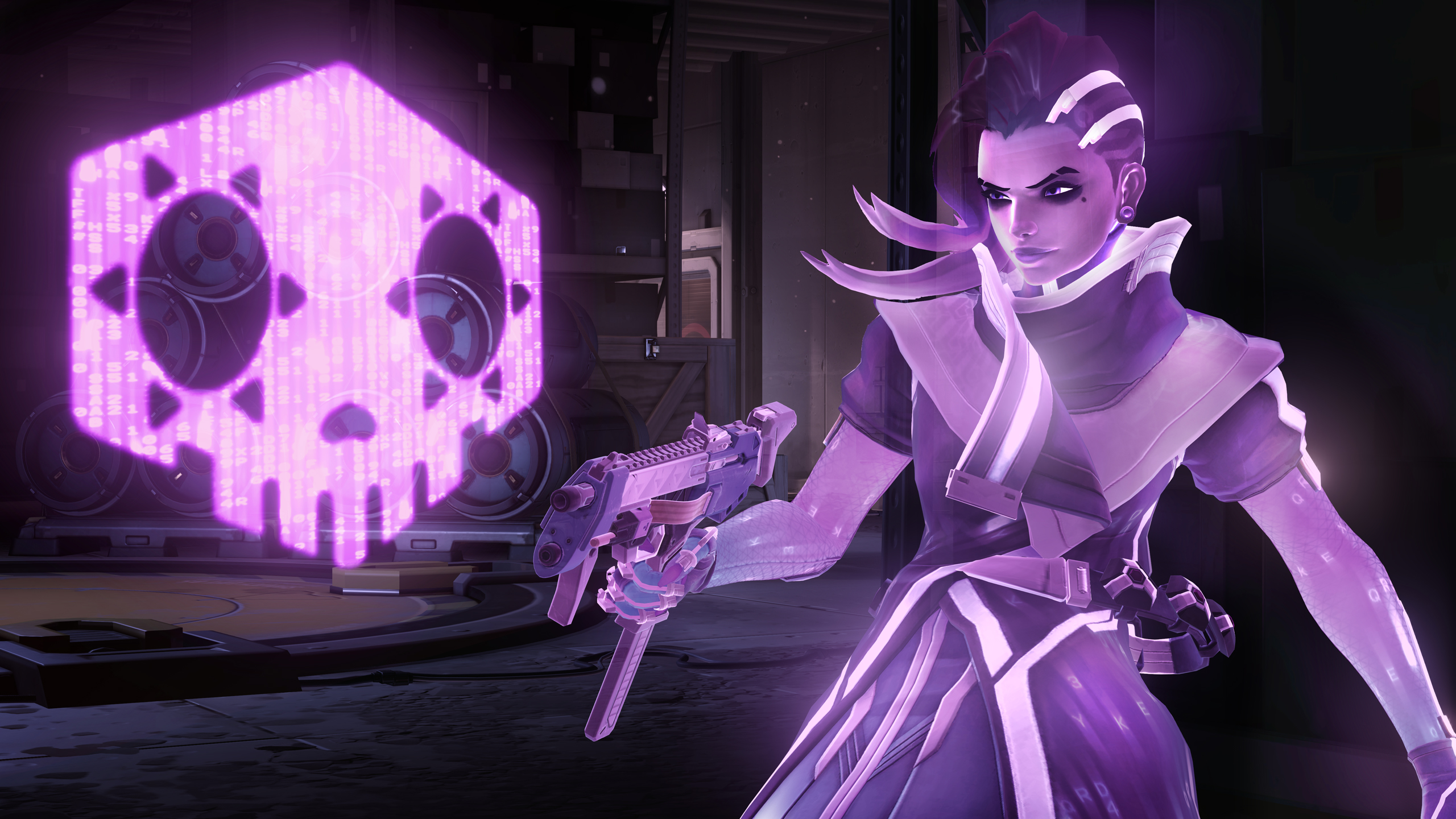 Despite being a major talking point, and walking highlight reel, Sombra has never been more than a niche pick within professional Overwatch. Across Apex season four and season one, Sombra has just a 13.98 percent playrate among both the North American and European Contenders, making her the 10th most played hero, according to Winston’s Lab.

On defensive rounds, however, Sombra sees over a 23 percent playrate. This roughly 10 percent increase coincides with a 14 percent drop in Zenyatta playrate on defense when compared to the average. This shows that Zenyatta players are often picking up Sombra on defense.

While Sombra on her own is indeed powerful, her kit leaves gaps in a team composition that is normally filled by a more traditional support. These gaps are exploitable, and often where we see Sombra-oriented defenses break.

A design difference in Overwatch is the number of times the attackers and defenders have to decisively win teamfights. In theory, the defending team can stall on the objective until overtime. Where then just a single fight in which all attackers are killed is enough for the defending team to prevent a completed map.

But for the attackers, however, it is absolutely mandatory to win repeatedly. For assault it often requires two or more decisive fight wins. On escort or hybrid maps, however, it can be upwards of six or seven. This disparity creates a difference in definitions on what winning and losing a fight means, based on whether you are attacking or defending.

The attacking team must make progress, either capturing a point or pushing a payload, to win. In order to advance, the objective must be clear of defenders. This means clean teamfights in which every enemy is slain or forced back are mandatory. A battle in which the attackers initially find kills, but fail to advance the objective, is not a win.

Because such clear victories are necessary for the offensive team, we often see them jump off the map after losing a player or two, since it’s unlikely you can win a clean teamfight from a disadvantage. They choose to reset rather than face an extended defeat, conceding a smaller loss of time.

On the flip side, the defending team doesn’t require definitive victories. For them, simply halting progress on the objective, and eating away at the attackers limited time, is a small victory. Of course the defenders ideally chase down the remaining players in order to waste further time. But they can always be content with their small gains.

This is why stalling is such an effective tactic in Overwatch. By losing gracefully, the defending team can mitigate the negative effects of losing a teamfight and consume unnecessary time from the attackers. Where the offensive team must play to win, the defenders can simply play to not lose.

Even the ensuing split-spawns from staggered deaths are less of an issue for the defenders. On escort maps the attackers must wait at checkpoints for various doors to open, or on assault maps the defenders spawn close to the next objective. This means the few seconds the defenders are dead are eaten up by the maps themselves.

The defending team heavily relies on their tanks and supports for stalling. Tanks are naturally the hardest to kill with their high health pools and damage mitigation abilities. Supports only push the tank’s survivability further with their healing, and can all use their ultimates to further enable stalling.

But if the tank is to stall the objective, they must be standing on it. Inevitably, their ability to block damage will run out, and they will have to take it where they then must be healed. And Sombra’s inability to provide healing to tanks on the frontline is precisely where her weakness as a support lies.

Healing, not on demand

Being on the frontline is a crucial part of a tank’s role in a teamfight. Whether stalling, or just skirmishing, a tank is supposed to be in front of their allies either blocking damage or disrupting the enemy backline. Normally, their supports heal them while they take damage in order to allow them to remain on the frontlines. Sombra, however, cannot do this. This fundamental hole in compositions with a Sombra support is often where we see them fall.

Sombra theoretically can outheal a Mercy with just a single large health pack hacked, by 25 percent. The core issue with Sombra’s healing, however, is that it’s in a fixed location, whereas every other source of healing in the game is portable. This means that if Sombra has replaced your Zenyatta or Ana, your tanks must leave the frontlines to heal, oftentimes using their movement abilities just to retreat for health.

This leaves gaps of time where the frontline of a team is stuck in battle with just a Lucio healing them—if he is even within range. These gaps are further widened, and exploited, when the attacking team plays Zenyatta.

In this clip, FNRGFE pulls Envision’s frontline away from the only large health pack around Volskaya’s point A. Because FNRGFE rushed into the area so quickly, they can safely assume that Envision’s Sombra has only had time to hack the one large health pack.

Normally, Envision’s tanks would not be out of position—they were properly harassing the members of FNRGFE. But in this instance, they have no healing where they are, and in fact both tanks use their mobility to attempt a retreat to the large health pack. But due to being marked with a Discord Orb, they both drop before reaching the healing they so desperately need.

Zenyatta’s Discord Orb combined with the focus fire of a professional team means tanks can drop before they have the opportunity to heal. A compounding issue is that often times the attacking team will react to a Sombra pick by focusing on controlling the area of the map where the best health pack to hack is. This denies Sombra’s healing completely, and forces the defending team to take a head-to-head battle at a healing disadvantage.

When the tanks die first and cannot defend their allies, we consistently see that team get crushed in the ensuing battle. Sombra’s inability to keep her tanks topped off and in the battle is where she suffers as a defensive support, as she cannot properly aid her team in stalling on the objective.

Why heal when you can DPS?

A potential solution is to simply play Sombra as a DPS pick and keep two traditional supports in your composition. Gone are all potential issues about healing your front line and the consequences from them dying. Now Sombra’s lower damage output compared to a traditional DPS makes itself clearer.

But where Sombra makes up for her weaknesses, both as a support and DPS, is the overwhelming power of her ultimate: EMP.

While Zenyatta is an effective tool in countering Sombra’s location specific healing, her ultimate makes it child’s play to kill Zenyatta. EMP not only disables all affected enemies abilities, but it also removes all shields, including Zenyatta’s 150 health worth of shields. This leaves the poor omnic with just 50 health to be quickly shredded.

Now suddenly the Sombra team has a man advantage on top of the enemy team being unable to use their abilities. If Sombra is a support, removing Zenyatta nullifies her healing weaknesses and levels the playing field as both teams now only have Lucio for in-fight healing. As a DPS, Sombra’s lower damage is made up for by disabling the damage blocking abilities of both D.Va and Winston, meaning that damage is easier to land for her and her allies.

Been here all along

Sombra requires her entire team to play around her limitations. Tank players need to understand they can’t extend out of an easily accessible range of hacked health packs. And the whole team needs to realize their ability to play to not lose, and stall the objective, is far worse than normal. Ironically, Sombra as a support enables her team to play to win, as EMP can end fights before they even begin.

As a support on defensive sides, Sombra has a notable gap in her armor: her inability to heal tanks on the frontline. If properly abused, this can quickly lead to the collapse of a Sombra-oriented defense, as they cannot stall properly, leading to an easy snowball for the attackers. But when given the time and space to build EMP, the raw power of Sombra’s kit comes to bear.