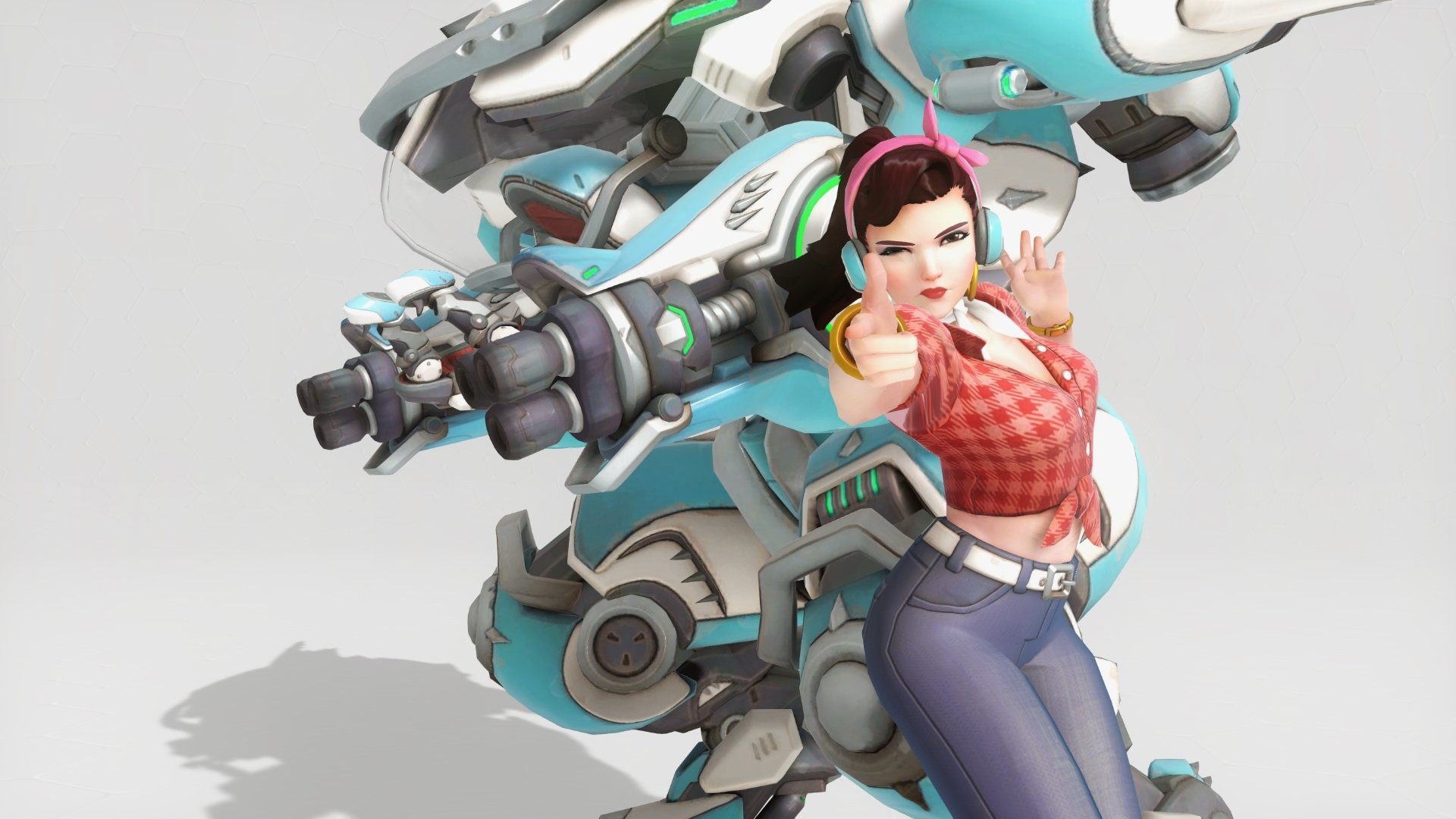 Overwatch is well-known for its beautiful graphics and designs, and the game features a plethora of intricate legendary skins for each of its 30 heroes, putting new and unique spins on the characters we all know and love.

With the number of beautifully-designed skins in the game, it’s difficult to pick just one skin for each hero—and with more skins and characters being added to the game as time goes on, the list is constantly changing.

Here’s our favorite legendary skin for each Overwatch hero.

Ana has a few well-designed legendary skins, but one stands out as the most unique. Released during last year’s Winter Wonderland event, Snow Owl Ana dresses the support hero in an icy-white and blue owl suit, fitting perfectly with her character design as a sniper.

As one of the most recently-released heroes, Ashe has yet to receive many legendary skins. Luckily, Ashe’s Gangster skin is well-worth the credits, putting a unique spin on her outlaw persona while beautifully redesigning the hero and her robotic butler, B.O.B.

Overwatch’s newest hero Baptiste was revealed with several incredible skins, but Buccaneer Baptiste is one of his best. The skin reimagines the hero as a pirate, featuring a wooden cannon on his back in place of his robotic arm and an eye patch instead of his scanner.

Bastion has a number of incredible legendary skins, but Stealth Bastion stands out above the rest. With its sleek gray design, Stealth Bastion redesigns the hero in a darker light compared to the happy robot we all know and love—even Ganymede is reimagined as a stealth drone.

As Brigitte’s sole non-release legendary skin, Shieldmaiden is a beautiful take on the support hero. Released during the 2018 Anniversary event, Shieldmaiden Brigitte has long, braided blonde hair and a brown bear-themed shoulder piece.

Doomfist has a few unique legendary skins, but Swamp Monster takes the cake. With green skin and aquatic gills, this Halloween skin looks like something straight out of a horror film, perfect for those looking to get in the spooky holiday spirit.

Echo is Overwatch‘s newest hero, meaning the aerial DPS has yet to receive many Legendary skins. That doesn’t stop Butterfly Echo from being one of the most intricate skins in the game, however.

Baihu Genji is one of the hero’s most intricately-designed skins with its sleek look. Released during last year’s Lunar New Year’s event, the skin features bright blue accents against the hero’s chain-mail robe, perfect for Genji mains looking to make the highlight reel.

With a fluffy wolf hood and two braids running down his back, Okami Hanzo continues to stand out as one of the simplest, yet most iconic legendary skins for everyone’s favorite bow-wielding character.

Released during the Winter Wonderland event, Beachrat stands out as one of the most humorous Junkrat skins. In homage to his Australian descent, this Christmas skin features the hero in swim trunks and sunblock with a rubber ducky floaty in place of his Riptire.

Equalizer Lúcio could possibly be one of the best skins in Overwatch, since it’s one of the few animated skins that actively changes throughout a match. The equalizer on his pants matches his personality and changes color to reflect which beat he’s playing.

McCree received his Blackwatch skin during one of the game’s anniversary events to give fans a look into the sharp shooter’s early days as a part of Overwatch. The skin dresses the cowboy up in a dark and sleek ensemble with red and gold accents, perfect for those looking to make flashy plays.

Mei received her Ecopoint: Antarctica skin to celebrate the release of the “Rise and Shine” animated short. This skin is packed with character, fitting the hero perfectly. One thing that players may not notice about the skin at first glance is that her freeze gun is actually just a hairdryer attached to a bottle of whipped cream.

Mercy has some of the best legendary skins of any Overwatch hero, so it’s difficult to narrow the choice down to just one. With golden accents perfect for showing off flashy plays, however, Zhuque Mercy stands out as one of the most beautiful and intricate designs for the Guardian Angel.

Moira is yet another recent Overwatch hero who has yet to receive many legendary skins, but there’s no need to pick between her newer skins—the support hero was released with four beautiful options. Oasis stands apart from the rest, however, with its dark purple and royal blue gradient effect and intricate headpiece.

An oldie but a goodie, Raindancer Pharah is one of the best original legendary skins of any Overwatch hero. Despite being a release skin, Raindancer outshines many of the character’s newer additions with its intricate design.

Themed after Lü Bu, a Chinese military general and warlord born in 161 AD, Lü Bu Reaper is the one of the character’s sleekest skins. With his red and black outfit, Reaper sports two long feathers out of his helmet, staying true to the character’s dark personality while also incorporating Chinese history into the design.

Reinhardt’s Crusader skin quickly followed the release of the Overwatch short “Honor and Glory.” The legendary skin is intricately-designed, giving fans of the game an insight into Reinhardt’s look before he became the shield-bearing hero we all know and love.

In what’s slightly creepy but also well-designed, Bajie Roadhog fits the character’s pig-like persona perfectly. The skin, released during the Year of the Rooster Lunar New Year’s event, dresses the tank hero in a pig mask with long, floppy ears and equips him with a set of scrolls and a burlap sack slung across his shoulder.

Sigma joined live servers earlier this month. Like all new heroes, the mad scientist released with only four legendary skins, although he will likely receive more in the events to come. Despite his lack of skins, Sigma’s Prophet skin stands out as one of the best in his collection, featuring the Talon operative in a white and baby blue Oasis-themed outfit. His eyes are covered with a glowing blue headpiece, which ties the ensemble together perfectly.

Jack Morrison has a few interesting legendary skins, but Grillmaster: 76 is the most humorous of them all. As a member of the Summer Games collection, the skin comes fully equipped with bottles of seasoning and a pair of tongs so players can take their barbeques to the next level.

As Sombra’s most recent skin, Demon Hunter fits the character’s stealthy personality perfectly. Demon Hunter Sombra sports a dark hood and demonic yellow eyes. Players could originally unlock Demon Hunter Sombra only by purchasing a BlizzCon Virtual Pass, although whether the skin will become available again in the future has yet to be seen.

Blizzard games are known for featuring unique crossovers to celebrate the different titles throughout the developer’s universe. Torbjörn’s Magni skin references the Magni Bronzebeard character from the World of Warcraft universe, reimagining the hero in an incredibly designed royal persona.

Even though Tracer boasts one of the highest number of legendary skins in the game, Graffiti Tracer easily stands apart from the rest of the hero’s skins. Sporting a blue hoodie and gas mask, Graffiti Tracer’s guns are equipped with spray paint to match her silly and mischievous personality.

Talon Widowmaker gives fans of the game an insight into the sniper’s look before she turned into the Overwatch character we all know and love today. While the sniper may be lacking her iconic blue skin, Widowmaker makes up for it with blueberry-blue hair in her Talon-themed look.

Winston’s winter skin perfectly embodies his Primal Rage ultimate ability, redesigning the gorilla into a hairy yeti. With giant ram skulls over his jet pack, this skin is a great choice for Winston mains looking to get into the holiday spirit.

Equipped with leaf legs and guns, Hammond’s Jack-O’-Lantern skin replaces his mechanical ball with a giant pumpkin. What’s even better about this skin is the fact that the hamster himself is dressed in his own costume: A potato sack that’s been tailored to take on the appearance of a bat-like scarecrow.

As the first skin to redesign the champion weightlifter as a giant teddy bear, Snowboarder Zarya easily stands out as one of the tank’s best skins. With a bear beanie and tail, Snowboarder Zarya is ready to hit the slopes in this holiday skin.

Everyone’s favorite Omnic monk has a plethora of amazing legendary skins, but Nutcracker Zenyatta takes the cake. Released during the first Winter Wonderland event, Zenyatta’s Nutcracker skin reimagines the support hero as a Christmas toy dressed in a red coat and top hat. To complete the look, Zenyatta chucks walnuts at his opponents in place of orbs.