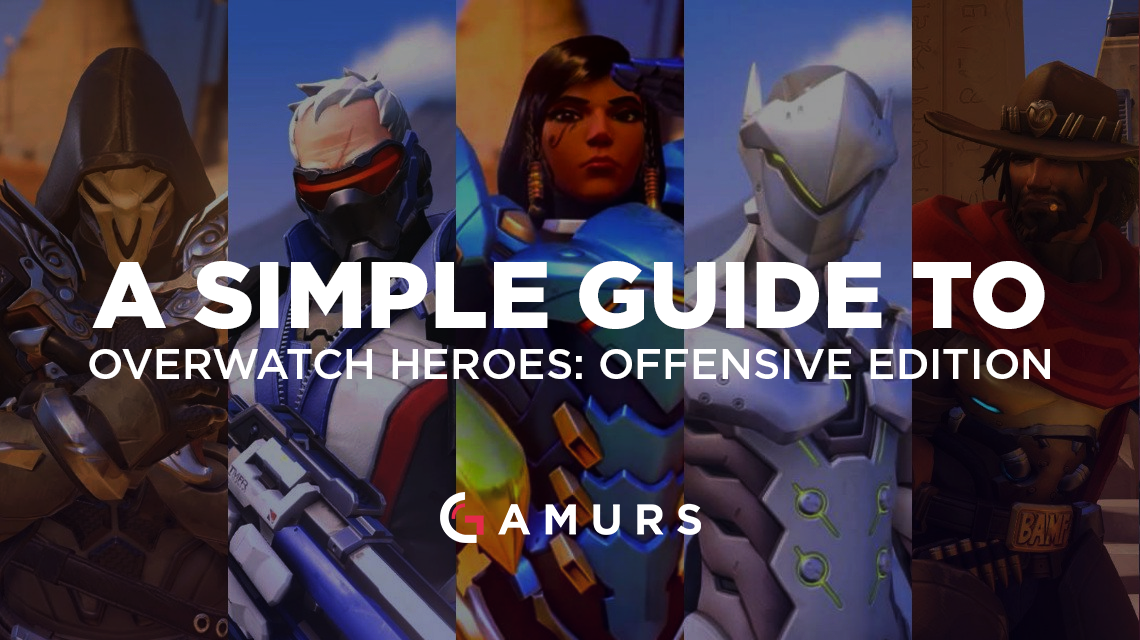 This is the beginning of a small series that will give a simplified rundown of each Overwatch hero and their capabilities. Each piece will also include which heroes a specific hero can counter, and which heroes counter that hero (like rock-paper-scissors). Assume each hero is paper, the hero they counter best is rock, and the hero that can counter them best is scissors. In this article, we look at the damage dealing offensive heroes.

Note: Not all counters are listed because many are situational.

Genji is a tiny, agile ninja who can throw shurikens better than most ninja turtles. He can also deflect anything you shoot at him with his samurai sword, so anything you throw at him will come right back and bite you in the butt. Since Genji is a comparatively smaller character who can double-jump around your crosshair, he’s a lot harder to kill than other offensive characters such as Soldier: 76 and McCree. His ultimate ability, Dragonblade, consists of him dashing at his enemies and then slicing them up like sushi.

McCree is Mr. High Noon himself. This cowboy’s six-shooter can be shot like a normal revolver, or it can be used as an abnormal automatic revolver. If you want to get crafty with his Wild-Western style of play, you can combine his barrel roll with his flashbang to aggressively rid the payload of enemies with your team. McCree’s infamous Deadeye ultimate causes nearby enemies to hear him chanting “It’s High Noon” before he unloads his cylinder into their bodies. It’s best to hide when you hear McCree’s voice.

Pharah can float like a butterfly and sting like a bee with her high-flying rocket skills. Using her powerful thrusting abilities, Pharah can boost up in the air at a moment’s notice or float around an enemy payload with ease. She also has a concussive blast that’s best used for knocking foes off of the map or shooting healers away from their patients. When you really tick off Pharah, she’ll use her ultimate Barrage of rockets to clear areas.

Reaper’s dual-wielding shotgun abilities allow him to win most one-on-one duels. In the face of danger, Reaper can make himself a ghastly Wraith so he can rejuvenate health using his passive Reaping ability or from a healer. When necessary, Reaper can mimic Jason Vorhee’s skills by teleporting from his current location to any given location that he pleases to reap his victims. If combined with Death Blossom, his ultimate, Reaper has the power to kill any insect who dares venture into his Venus Fly Trap of an ultimate.

Soldier is your average soldier whose hybridized gun is the most overpowered of the offensive heroes. Being one of the only heroes in the game that can sprint, Soldier can make Overwatch feel more like a Call of Duty game involving super-humans/aliens. When his health is low, he can self-heal with Biotic Field to quickly get back into the action. Soldier’s gun also has a strong trifecta of helix rockets that can decimate hordes of enemies when combined with his primary gun. His ultimate, Tactical Visor, is basically an unglorified aimbot, so it would be ideal to get out of sight when you hear “I’ve got you in my sights.”

Tracer, the poster-girl for Overwatch, is arguably one of the most irritating offensive heroes to play against. With her Blink and Recall abilities, Tracer can seem to be in three places at once while also gaining health. Because she moves so fast, it’s harder to predictably pinpoint how a Tracer player is going to move around the map with her automatic, dual-wielded Pulse Pistols. Tracer’s ultimate ability, the Pulse Bomb, can adhere to enemies and surfaces before leaving an explosion with a relatively small radius. Tracer is the best character for flanking and being a general nuisance to the opposing side.

Sombra is Blizzard’s newest hero edition to Overwatch thanks to her unprecedented hacking abilities. Her Translocator and invisible Thermoptic Camo allow Sombra to be a more useful offensive hero when flanking and hacking are necessary. She can hack enemy abilities (rendering them useless for a short period of time) and hack health packs around the map. With her ultimate EMP, Sombra can nullify several heroes’ abilities if they’re in her vicinity. Sombra’s sixty-bullet-mag machine gun is the highest of all of the offensive heroes, but it certainly is lacking in the damage department.

What’s your favorite offensive hero? Tell us below or with a tweet @GAMURScom.