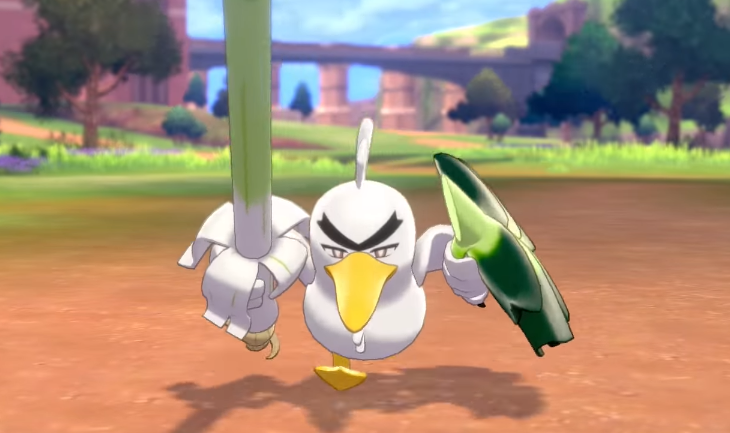 Regional variants have returned in Pokémon Sword and Shield, and with a new region comes new looks for older species. A number of Pokémon from earlier generations make an appearance in the Galar region, but they look a little different from how fans may remember them. One of those Pokémon is Farfetch’d—and he packs more of a punch compared to his Kanto counterpart.

Galarian Farfetch’d bulked up from his generation one days and picked up a much larger leek than his Normal and Flying-type brethren. Farfetch’d didn’t only get a new look, however. The species also got an evolution: Sirfetch’d, a Fighting-type who carries a shield in one wing and a sword-like leek in the other.

Where to find Galarian Farfetch’d

Galarian Farfetch’d is exclusive to Pokémon Sword, so those playing the Shield version of the game can only obtain the Fighting-type by trading with another player. Those who own Sword, however, can find Farfetch’d as early as Route 5 once they complete the Grass gym in Turrfield City. Even though it’s one of the route’s rare encounters, Farfetch’d appears in the overworld and can occasionally be seen walking around in the grassy areas scattered throughout the route.

The Fighting-type can also be found in the Giant’s Mirror section of the Wild Area. Galarian Farfetch’d will only appear in this location during foggy weather, however. In the Wild Area, Farfetch’d is between levels 28 and 30, so those who are still in earlier stages of the game may want to catch the regional variant on Route 5 instead.

Related: How to get new Max Raid Battles to appear in Pokémon Sword and Shield’s Wild Area

Similarly, Farfetch’d can also be found in Max Raid Battles for those who own a copy of Pokémon Sword.

How to evolve Galarian Farfetch’d into Sirfetch’d

Unlike other species of Pokémon, there’s no level requirement for Galarian Farfetch’d to evolve into Sirfetch’d. The Fighting-type requires a new set of criteria, however—and the method isn’t as clear-cut as simply leveling up your Pokémon. Instead, Galarian Farfetch’d needs to get three critical hits in one battle to evolve. Even if Farfetch’d doesn’t level up at the end of the battle, it’ll automatically evolve after getting three crits.

Equipping Farfetch’d with a Leek will increase the Pokémon’s likelihood of getting a critical hit by two stages. Finding a Leek is easy—Galarian Farfetch’ds can often be found holding the item in the wild.