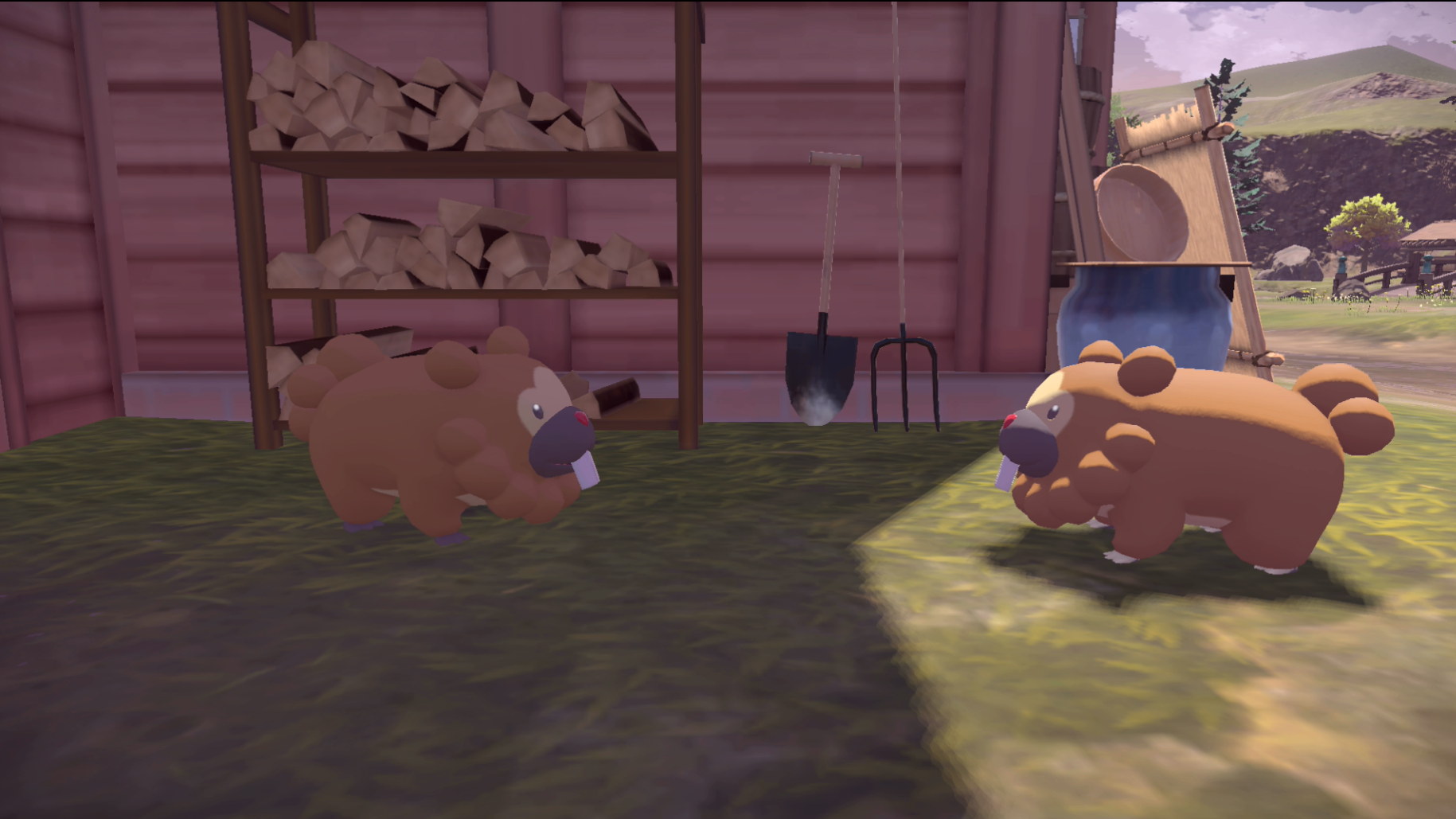 In a fictional universe with over 900 friends to catch, train, and battle with, why would anyone choose a “Normal-type” Pokémon as their companion? With few special abilities and no distinct design characteristics, normal types can seem pale in comparison to the other vibrant Pokémon in the game.

Lickitung, aka “the licking Pokémon,” has an iconic design dating back to the first generation games. Standing upright with a distractingly long tongue, Lickitung’s design is simple, yet has so much character. Seeing a Pokémon that uses its tongue as a weapon among some of the other threatening beasts in the series is truly captivating. Top it off with Lickitung’s ability either being “Own Tempo” or “Oblivious,” and it’s hard not to love.

There have been a few notable Lickitungs in Pokémon’s history, including Jessie’s Lickitung from the Pokémon anime and the Lickitung that makes a rather intimate first impression on a train in the Detective Pikachu movie.

As far as using a Lickitung in battle, its presence in-game is a bit lackluster. Adding a Lickitung to your team as a defensive asset, however, may interest some players who find the cute design endearing. Not to mention Lickitung’s golden Shiny looks amazing.

What stands out most about Lechonk is its name. Likely based on the word “lechon,” which is a suckling piglet, the name combines popular slang with the Spanish word. And as fans can confirm, Lechonk definitely qualifies as a “chonk.”

Porygon is unique because it was the first Pokémon created artificially, not found in the wild. As technology evolved, so did Porygon, into Porygon2 and then Porygon-Z. The Porygon line’s backstory is part of what makes these Pokémon loved, but the simple blocky floating bird’s design is also what makes it great.

As far as its use in competitive play, any player’s best bet would be to evolve their Porygon into Porygon2 or Porygon-Z. Porygon-Z has excellent special attack stats that can be very powerful, but Porygon2 has the advantage of being able to use eviolite to boost its defense stats.

Unfortunately for Porygon, its only appearance in the Pokémon anime was somewhat of a disaster. The Pokémon’s feature episode, “Dennō Senshi Porygon,” included a scene with flashing lights that sent over 600 Japanese children to the hospital. Porygon hasn’t been featured in the anime as a main character since, but perhaps this incident has added to the Pokémon’s status as a generational icon. Many fans say that the Pikachu in the episode caused the strobing effect with its attack, and the Porygon did nothing wrong.

Of the many cat Pokémon in the series, Meowth is one of the most iconic despite being a Normal type. This is likely because of Team Rocket’s Meowth, who can actually speak to humans in their language, being the first Pokémon to actually talk. Therefore his character is deeper than other Pokémon in the show and movies, and even though he is part of the evil Team Rocket he is still a fan favorite.

Meowth also has three different regional variants, the original Kantonian version, along with the newer Alolan and Galarian versions that add a Dark and Steel typing respectively. These newer variants keep Meowth fresh and let players experience the classic Pokémon in a different type. But let’s be honest, the original Meowth will always be the best.

Similar to Lechonk, the next two Pokémon on this list are low-level Normal-type Pokémon typically found at the beginning of a game. Wooloo is another that captured the hearts of fans right away.

The fluffy sheep is one of the very first Pokémon players encounter in Pokémon Sword and Shield, and it isn’t by walking through the tall grass. The Wooloo live in the fields outside the player’s house, and a group of them, sleeping quietly, block off the path to guide the player in the right direction. The best part about these Wooloo? They don’t walk, they roll. Wooloo, like Lechonk, are so round it’s hard not to love them. After years of encountering brown birds on the first steps outside your house, being met with a herd of fluffy sheep is a memorable way of starting off the generation eight games.

Bidoof is probably the most memorable low-level Normal-type Pokémon in the entire series. While wild Bidoof are extremely commonplace— it feels like the player is constantly running into the rodent in Pokémon Diamond and Pearl—they are also extremely useful. The Sinnoh region has many areas of terrain that players must traverse in their adventure, and somehow Bidoof is capable of trekking through all of them.

Bidoof is seldom used in battle in generation four and is more commonly used as a vehicle for HM moves since it can learn practically every move in the game. In other Pokémon media, Bidoof has often been characterized as an underdog. But earlier in 2022, The Pokémon Company released “Bidoof’s Big Stand,” a short video story about a particular Bidoof that challenges the boundaries of the typical HM-oriented playstyle.

Snorlax is one of the most popular Pokémon in the franchise, probably because Snorlax are so relatable. Who doesn’t want to just eat and sleep all day? Its Pokédex entry in Pokémon X even specifies that Snorlax are not satisfied until they eat at least 880 pounds of food every day. In certain games in the series, including Pokémon X and Y, a Snorlax may be blocking a pathway after falling asleep there.

Pokémon anime protagonist Ash also has a Snorlax, appearing in the show to showcase both its strength and laziness. Snorlax has a classic, simple design that makes it a lovable, staple Pokémon in every generation since the beginning.

As far as competitive play goes, Snorlax’s best stats are, unsurprisingly, its defensive stats. Being one of the bulkiest Pokémon in the game certainly helps in this area. Snorlax also has a unique Gigantamax form. Gigantamax Snorlax is so lazy that it has an entire park with a tree growing on its stomach from laying in the same place for so long.

Chansey is always on a mission, whether to protect her egg or to heal other people and Pokémon. Canonically known as the Pokémon who accompanies Nurse Joy, Chansey as a species only exists as female and will work tirelessly to protect the eggs in their front pouch.

Chansey also make great companions, and can only be evolved into Blissey with a high friendship stat with their trainer. Many people might not realize that Chansey is just a single-typed Normal-type Pokémon, especially since they breed within the fairy egg group and have the signature pink design of most fairy Pokémon.

Ultimately, if a trainer gives their Chansey enough love to evolve into Blissey, they have a huge asset — the Pokémon with the highest base HP stat in the game. Blissey is the OG “chonk,” and she can handle anything that gets thrown at her.

The coolest thing about Normal-type Pokémon is that they aren’t strictly defined like some other types, so there is an endless realm of possibilities the player has in using them. And Eevee realizes these possibilities in a way that allows the player to take their Pokémon to the next level. Having an Eevee on a team is an investment for the future, as it can evolve into whichever type you’re in need of. Every evolution of Eevee is a winner, too, and the Pokémon is a fan favorite for a reason.

Though there isn’t a wrong choice when evolving Eevee, some may argue leaving it in its unevolved form is a waste. But in Pokémon Sword and Shield, we see that Eevee is special in its own way. With the addition of Gigantamax Eevee into the Pokédex, players now also have an incentive to keep Eevee just the way they are.

Though Eevee is spectacular, nothing resembles “endless possibilities” quite like Ditto. The Pokémon that has no characteristics of its own and only knows one move may seem boring at first, but for many Pokémon players Ditto is one of the most important and sought-after Pokémon.

Aside from the fact that Ditto has the freedom to transform into whatever its heart desires, in the main series games it also fulfills another purpose—Pokémon breeding. Ditto makes breeding Pokémon much less of a chore, and also can provide a distinct advantage for those looking to hatch the Pokémon of their dreams. Taking in a foreign Ditto with perfect IV stats is most trainers preferred way to hatch their Pokémon with an increased chance of being Shiny. Ditto is so useful!

But also, how can you not love this expressionless purple blob just on its own? Admittedly while adding a Ditto to a competitive team is probably not the best idea, there’s something about that face that gets me every time.