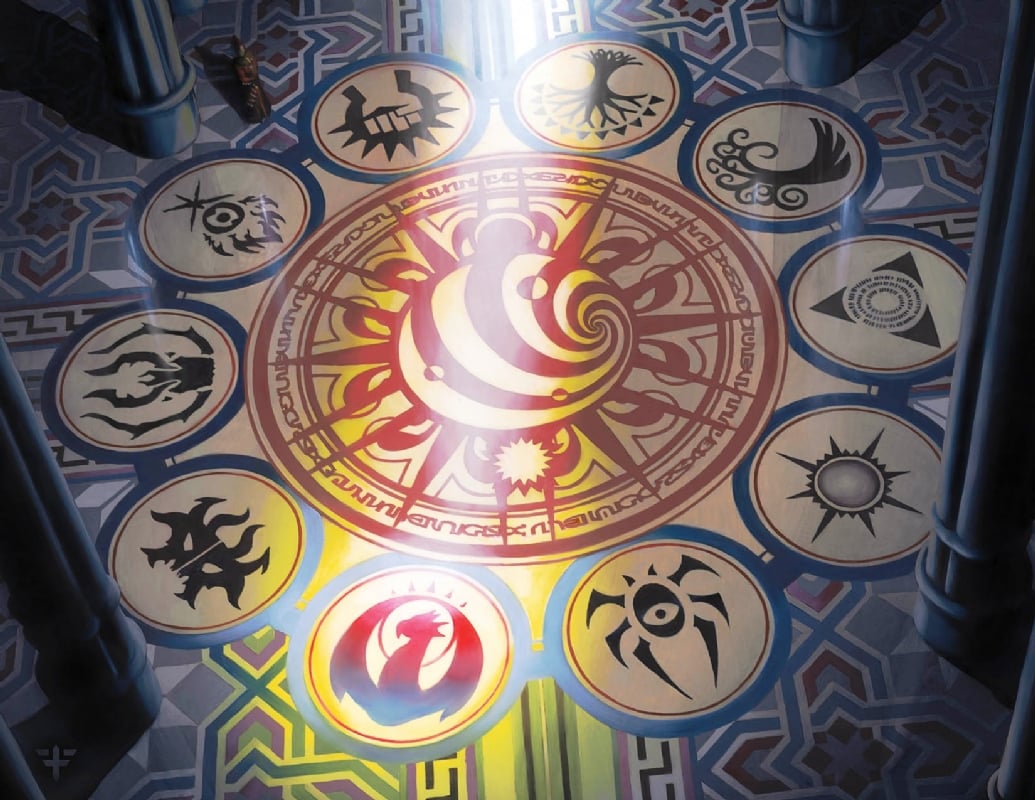 The five colors in Magic: The Gathering all have specific design flavors and implementations. But most decks aren’t a single color and usually come in pairs. Each pair is named after a fictional guild on the in-game plane of Ravnica.

Here are the 10 dual-color pairs and everything you need to know about them.

Azorius decks are all about planning and controlling the flow of the game. Sometimes that plan is straightforward, like using M20‘s Empyrean Eagle to get an advantage in the skies. But most often the plan is to set up for late-game dominance using card advantage. Iconic cards like Supreme Verdict and Sphinx’s Revelation have teamed up in the past to do just that.

Mechanics made for the color pairing include Forecast, Detain, and Addendum. Powerful Azorius decks are known for their powerful board control combined with lifegain from White and card advantage elements of Blue.

Optimizing and abusing a system is the ultimate goal of any Orzhov deck. This might mean having the cleanest removal spell, Vindicate, but it also includes messing with combat math and life totals using cards like Ethereal Absolution and Cruel Celebrant. Think about just making completely unfair rules, like Athreos, God of Passage.

Mechanics made specifically for this pair include Haunt, Extort, and Afterlife. Orzhov decks typically like to leech life from their opponents, pinging them for small amounts of health while gaining that much themselves.

Boros is the most war-like of the color pairs, focusing on cheap and aggressive creatures and spells that push for an early victory. First come cheap creatures with powerful abilities, like Boros Reckoner or Figure of Destiny. Then shut the door with powerful finishers or go all-in on one final attack with spells like Chance for Glory.

Boros specific mechanics include Radiance, Battalion, and Mentor. This color combo is at its most powerful when it’s built to attack with a slew of creatures that synergize with one another all at once.

Selesnya decks care the most about creatures. That might mean making the biggest creatures or the most creatures, or just make all your creatures much, much bigger. You can even use a creature that makes creatures that get stronger based on the number of creatures you have.

This color pair has mechanics that include Convoke and Populate. Many Selesnya decks will try to attack you by creating a number of creature tokens and/or buffing their creatures with +1/+1 counters.

The plan for Dimir decks is to slowly, maybe almost invisibly, make the game impossible for its opponents to win. Small, evasive creatures like Baleful Strix and Shadowmage Infiltrator generate slight card advantages that build up over time. Then, steal your opponent’s best creature with Thief of Sanity, or bring yours back from the dead with Concoct.

Popular Dimir mechanics include Transmute, Surveil, and Cipher. The color combo is known for having decks centered around rogue creatures. It is also the color combo used for Mill strategies.

Casting spells is the name of the game for Izzet decks. Efficient, versatile cards like Electrolyze set the stage for big payoffs. Either go infinite with combo enablers like Thousand Year Storm or just blow up your opponent with powerful finishers like Explosion.

Replicate, Overload, and Jump-Start are popular mechanics used by Izzet decks. This color combo is at its most powerful when it can combine mana advantages from Blue with direct damage cards that Red provides.

Simic decks use mechanics like Graft, Evolve, and Adapt. This color combo tends to use powerful Green creatures more defensively and gains card advantage from Blue.

If you’re into mayhem, Rakdos is the color pair for you. These decks are all-in on killing creatures and doing damage, and likely having fun along the way. Flexible removal spells like Bedevil keep opponents tilted while war leaders like Olivia Voldaren and Judith, the Scourge Diva lead the way to victory.

Rakdos mechanics include Hellbent, Unleash, and Spectacle. In recent sets, the color combo has also started to include the creation of Treasure tokens that can be used to create mana and often synergize with other Rakdos cards.

Graveyard shenanigans are Golgari’s specialty. Generate card advantage by messing with dead things using cards like Deathrite Shaman or Grim Flayer. Then, couple some of the most powerful removal in the game with creatures that are super-charged by filling up graveyards.

Golgari-specific mechanics include Dredge, Scavenge, and Undergrowth. The color combo is at its best in decks that use the graveyard as an extension of a player’s hand.

Gruul gets aggressive with big, angry creatures. Deal damage with beasts like Dragonlord Atarka, make your own personal army with Huntmaster of the Fells, or just straight-up cause the apocalypse. Whatever you plan on doing, make it big.

Bloodthirst, Bloodrush, and Riot are popularly used mechanics in this color combo. Gruul decks work best when they’re heavy on creatures that want to attack early and often.