Today I will be discussing the competitive use of the new Roguelegendary in Whispers of the Old Gods- Xaril, Poisoned Mind. As usual I will analyze the raw stats and effect of the cardand see what possible decks and cards Xaril might see play with. Let’s take a look: 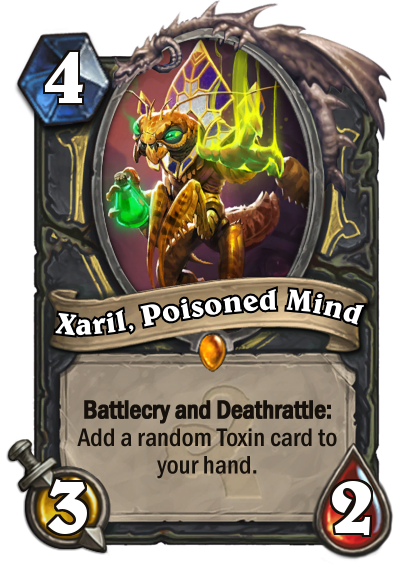 Right off the bat, a 4 mana cost minion that has 3 attack and 2health isn’t great in terms of combat.  Tomb Pillagerpressures the board a bit more at the same cost, especially duringthe early game.  3 damage can still trade well with a decentamount of minions, and things with deathrattle typically want todie.  Also Xaril being 4 mana means that if you are desperatefor a combo initiator, he won’t be useful in that regard untillater in the game.  However, what you can easily use to starta combo are Xaril’s toxins that you gain from his battlecry anddeathrattle:

Most of these spells are pretty decent for one mana. Bloodthistle, Briarthorn, Fadeleaf Toxin are the only onesthat are better depending on the state of the Rogue’s board. Players also get two chances to snag something they may need. The downside of this effect is obviously that the toxin youget is random.  Most likely Rogues will want to get either theKingsblood or Firebloom toxin since they seem like the most useful. Dealing 2 damage can kill off a minion or push for lethal anddrawing a card is always nice.

For Standard play Xaril, Poisoned Mind seems pretty versatilebased on what Rogue decks are currently popular and the directionthe Hearthstone Design Team is taking with Rogue.  Xaril’stoxins would be super useful in Malygos Rogue.  Players canuse the low cost spells to trigger Gadgetzan Auctioneer and VioletTeacher, while also initiating the combos from SI:7 Agent,Eviscerate, and Edwin VanCleef.  Azure Drake, Malygos, andBloodmage Thalnos can increase the spell damage of Firebloom Toxinto push for board control or lethal.  Maybe players will see areturn of Charge minions like Southsea Deckhand and Leeroy Jenkinsthanks to Bloodthistle Toxin (though this seems like a bit more ofa stretch thanks to the random nature of Xaril).

Xaril could also make a good addition to Deathrattle Rogue. The problem with Deathrattle Rogue is that it is losing a lotof strong deathrattle cards, such as Piloted Shredder and NerubianEgg, in Standard play.  However, in a recent stream featuringHearthstone’s Lead Designer Ben Brode was asked on his stream about”good deathrattles” and he said, “I’m not going to tell you aboutunreleased stuff in Whispers of the Old Gods”.  Players arealready aware that N’Zoth, the Corruptor is coming out and thatcard makes Deathrattle Rogue quite tantalizing.

I do see a couple of downsides regarding Xaril, Poisoned Mind. Due to the randomness of Xaril’s effect players might not getthe toxins they need.  Saving toxins could lead Rogues intooverdraw situations and force them to use the toxins ineffectively. Also for a Deathrattle minion he doesn’t stick well to theboard.  Playing Xaril on turn 4 doesn’t seem helpful as he isquite flimsy in combat.  Xaril just doesn’t leave a lastingimpact on the board as a legendary.  However, that might bedue to the role he plays as a more utility card for the Rogue.

My final verdict on Xaril is that I believe he is competitivelyviable in certain decks.  I think he’ll make a great fit inMalygos Rogue, but might face more competition in DeathrattleRogue, both Standard and Wild versions.  Rogue’s legendariesin the past two expansions have not had a lasting impact on theHearthstone meta (I will always love you Trade Prince Gallywix),but I think Xaril, Poisoned Mind will see play.