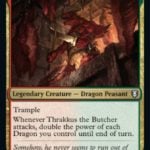 Commander Legends: Battle for Baldur’s Gate is the second fully draftable set for Commander and is the second Dungeons & Dragons collaboration in Magic: The Gathering history.

The first Commander Legends from 2020 was a successful experiment that brought Limited gameplay to Magic‘s biggest multiplayer format. While there are some differences between a Commander Draft and normal Limited, many of the same design principles remain.

One core part of the Limited experience is signpost Uncommons. For each of the two-color archetypes in a given set, Wizards of the Coast makes sure to include Uncommons that give players a hint at what certain archetypes are supposed to do.

There are 10 main archetypes in Battle for Baldur’s Gate that correspond with the 10 two-color pairs in Magic. Each signpost Uncommon is a legendary Creature that can be your Commander in Draft and Constructed.

Cadira, Caller of the Small

The G/W archetype wants to flood the battlefield with Creatures and overwhelm the opponent. Token strategies in Commander are effective because of their ability to have enough Creatures to attack while also leaving up potential blockers for the crack back.

Commander Liara Portyr encourages you to attack and attack often. The R/W color pair is all about trying to end the game as quickly as possible through combat damage. Liara Portyr has a powerful attack trigger that generates card advantage and cost reduction. Red and White decks struggle with card draw as the game goes on.

Liara Portyr can impulse draw up to three cards and reduce the cost of those spells by up to three. Look to force unfavorable blocks with the aggressive 5/3 body, and don’t be afraid to trade in combat. Other decks will want to sit around and accrue value, and it’s important that the R/W player forces them to engage.

Experienced B/G players will look at Kagha, Shadow Archdruid and immediately know what they’re being encouraged to do. Kagha wants to fill the graveyard and use it as a resource to win a slower-paced, grind-y match.

For a deck that wants to use the graveyard, Kagha’s attack trigger essentially draws two cards. The deathtouch combined with a 1/4 body protects her while attacking, and turns her into a dangerous blocker. A deck lead by Kagha will want to attack first, then cast spells in the second main phase to get full value out of the mill effect.

Dragons are present in every color, but those looking to play Dragon-tribal will likely be running a Green and Blue deck. Korlessa, Scale Singer is a two-mana Dragon that lets you cast Dragon spells from the top of your library.

This is a solid effect that somewhat adds an extra card to your hand to use during your turn. It’s not a threatening Creature with a 1/4 body, but as a utility Creature, Korlessa is solid. Whether it’s as a Commander or in the 99, Korlessa is a strong pick when drafting a Dragon deck.

Like Dragon cards, Adventure spells are available in each color. The main support for a dedicated Adventure deck comes in U/R. Lozhan, Dragon’s Legacy is a signpost Uncommon that can lead a spellslinger deck that takes advantage of the two-for-one advantage of Adventure spells. It allows you to fill your deck with spells while still having Creatures to play on the battlefield.

The ability works with Dragon spells as well, which is great. Dragons are usually expensive Creatures, and will represent five to seven damage from Lozhan’s trigger.

Mahadi, Emporium Master is a three-mana 3/3 Creature that creates a treasure token for each Creature that died on your turn. This is an excellent ability on a Creature with a solid body. The ability triggers when any Creature dies. That means sacrificing your own Creatures or destroying opposing threats will yield treasure tokens.

Minthara, Merciless Soul is the signpost Uncommon for W/B. The color pair focuses on triggering leaves the battlefield abilities. This blends the sacrifice theme from Black with the blink theme found in White. W/B is another archetype that looks to play a slower game with Creatures that generate consistent value.

As the counters stack, Creatures get a power boost equal to the number of experience counters. Minthara is a nice card that can sit on the battlefield and help your Creatures get better over time.

Oji, the Exquisite Blade is the W/U signpost Uncommon. The color pair is focused on blinking Creatures and getting repeatable value out of enters the battlefield triggers. Oji has a solid ability that lets you gain two life and scry two cards.

Whenever you cast your second spell each turn, you can blink a Creature. This is a great ability, as casting two spells isn’t a hard requirement to meet. If you have no other Creatures, then Oji can blink themself. This is a solid Commander to lead a deck and should make it into the 99 of any blink deck.

Initiative is a new mechanic introduced in Battle for Baldur’s Gate. It’s a combination of monarch and venture. The signpost uncommon for this mechanic is Rilsa Rael, Kingpin. The U/B five-mana legendary gives you the initiative when it enters the battlefield.

With a 2/5 body and deathtouch, it will be an effective attacker and blocker. When Rilsa Rael attacks, target attacking Creature gains deathtouch. The Creature also gets +5/+0, first strike, and menace if you’ve completed a dungeon.

Rilsa can give itself the buff, but it’s best used on another attacking Creature. With the high number of evasive threats in Blue and Black, giving a Creature +5/+0 can represent a lethal attack on an opponent in the late game that they can’t block.

Thrakkus, the Butcher is the signpost Uncommon for R/G. This color pair wants to run Dragons with high power stats to win the game through combat damage. Thrakkus is a 3/4 Creature with trample that doubles the power of each Dragon you control when it attacks.

This ability can suddenly end the game by enabling well over 20 points of combat damage to a player if it’s set up correctly. At five mana, there’s no need to run out Thrakkus as soon as possible. It’s best to wait until you can get full value out of the attack trigger and knock a player out of the match.