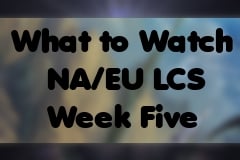 Well that was intense.  Not only were there a ton of unexpectedly good games, there were enough upsets to necessitate several benchings of high profile players.  I fell to 6/10 and 5/10

Many of the upcoming games this week will be interesting just to see how the myriad replacements work out.

Game to Watch:  Fnatic and SK is set to be a great match.  This is looking like a likely split final unless Elements or the Unicorns step up their game, so it’ll be a good preview.

Game to Watch:  Fnatic again looks to be the team to watch, as the Gambit matchup will be interesting.
Betsy is a bit of an unknown, but Gambit has shown moments of greatness, with former midlaner niQ being one of the low notes on the team, so it may be the improvement they need.
Honorable mention to Roccat vs Elements, because this will be the test of new top laner Kev1n, to see if he can jolt EL back into winning ways.

Game to Watch:  Team Liquid bringing back Keith and Winterfox getting their supposedly main support finally make for an exciting game.
Watch the bot lane with some popcorn.

Game to Watch:  If Liquid trounce Winterfox and look to be back on track, watch their match with TSM.
If not, Cloud 9 and CLG should have a very high level contest of rotations.  Or just watch Impulse and Gravity for a blood bath hehe.

Should be a tough week to predict, with many matches lacking a clear favorite.  Though after last week not much is clear in either division.