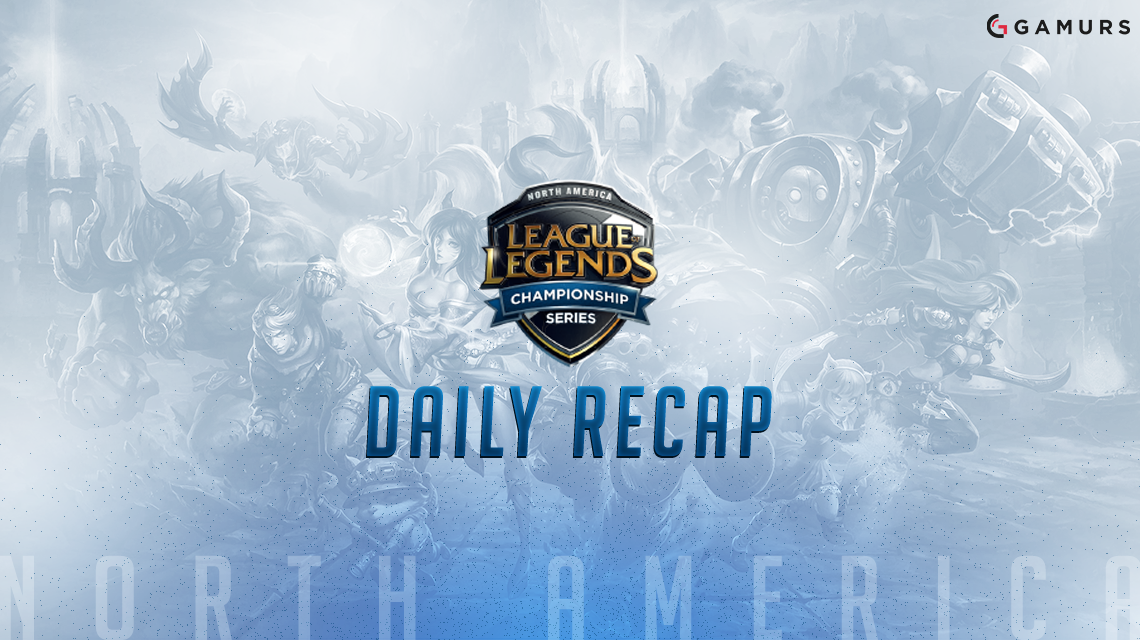 From Team SoloMid almost dropping their first series of the split, to Immortals demolishing Team Liquid, here is how Day 2, Week 4 went down.

Despite EnVyUs holding the better record, losing to Cloud9 wasn’t too big of a surprise; the total domination in game one, however, was. In game one, EnVyUs only got two towers and two drakes. That’s it. No kills. Cloud9, on the other hand, ended the game with 13 kills, 10 towers, a 13,000 gold lead, and the win.

Game two was a different story, but only slightly. It wasn’t quite as much of a blowout, but the result was the same. Cloud9, though lacking in drakes yet again, kept control of the game by winning the kills 15-7 and taking 10 turrets. In the end a stellar 9/1/6 performance from Zachary “Sneaky” Scuderi as Ashe, that included a penta kill, gave Cloud9 the win.

This should’ve been an easy win for TSM, but it was far from it. This game was extremely close, as both teams were surprisingly equal. That is, until about the 26-minute mark. TSM made a questionable call for Baron, and it went poorly. Echo Fox got the ace and the Baron, not dropping a player all the while, and then picked up another kill on the backend of it. The game was 100% in Echo Fox’s control, and it showed just one minute later when Henrik “Froggen” Hansen earned himself a triple kill. There was a personal pause for Echo Fox 38 minutes in, but another botched Baron call from TSM allowed Echo Fox to send all five of their members to destroy on open TSM nexus and win the game.

In game two, the TSM we all know and love (or hate) showed themselves. Choosing the exact same team composition after losing a game is not generally a good idea, but this is TSM, so they did it anyway. Of course, it worked. Instead of changing their team, TSM forced Echo Fox to make changes to their own by banning out several champions Echo Fox used in game one. While the kills were close, only 8-6 in TSM’s favor, a 9,000 gold lead tells the true story of game two as TSM took the win and forced a third game.

Despite Echo Fox leading in kills almost the entire game, including earning a quadra kill on Anthony “Hard” Barkhovtsev’s Rek’Sai, TSM kept a consistent gold lead and was able to take the game win and stay undefeated. It was close, as Echo Fox really put up a fight and showed that gods can bleed if fought correctly, but the TSM faithful were consistently heard chanting “TSM! TSM! TSM!” It seems TSM fans never lose faith, and right now they have no reason to.

Game two, though not as fast, was business as usual for Immortals. This time the win took 27 minutes, but the gold lead was even higher at 20,000 and Immortals won in kills 20-4. This whole series was just ugly for Liquid. Team Liquid’s four game win streak meant nothing to Immortals, as they decimated Liquid 2-0 in under an hour.

In a battle of two of the lowest seeded teams in the NA LCS, game one of this series was full of confusion and odd strategic decisions. Overall, it was close, but a Phoenix1 misplay in the final minutes allowed NRG the 4-1 man advantage as they shoved down the mid lane to win the game, taking down the Phoenix1 nexus before their players could respawn.

Game two was 54 minutes of weird decisions. For almost all 54 minutes, NRG had the lead. Why didn’t they win? No proactive playmaking. Phoenix1 came back slowly, very slowly, as the game wore on. NRG had four Barons and three mountain drakes, but still didn’t have enough pushing power to set up a good siege on the Phoenix1 base. In the final few minutes, a fight at Elder Dragon left just one NRG member alive to try and hold off four of Phoenix1’s members as they shoved into the NRG base. The exact opposite of game one. Needless to say, the four players of Phoenix1 won the push and the game.

Game three was just as slow and strange as games one and two. Once again though, Phoenix1 failed to close out a series as NRG took the win in game three. NRG had the lead all game, and this time they managed not to lose it. A 13,000 gold lead, 17-8 in kills, 3-2 in drakes, a couple Barons… It was enough for NRG to scrape by with the win.

With only one day of games left, what are your thoughts so far on week four of the NA LCS? Has a team surprised you yet? Let us know your thoughts in the comments below, or on our Twitter – @GAMURScom, and be sure to follow us for all of your eSports needs.